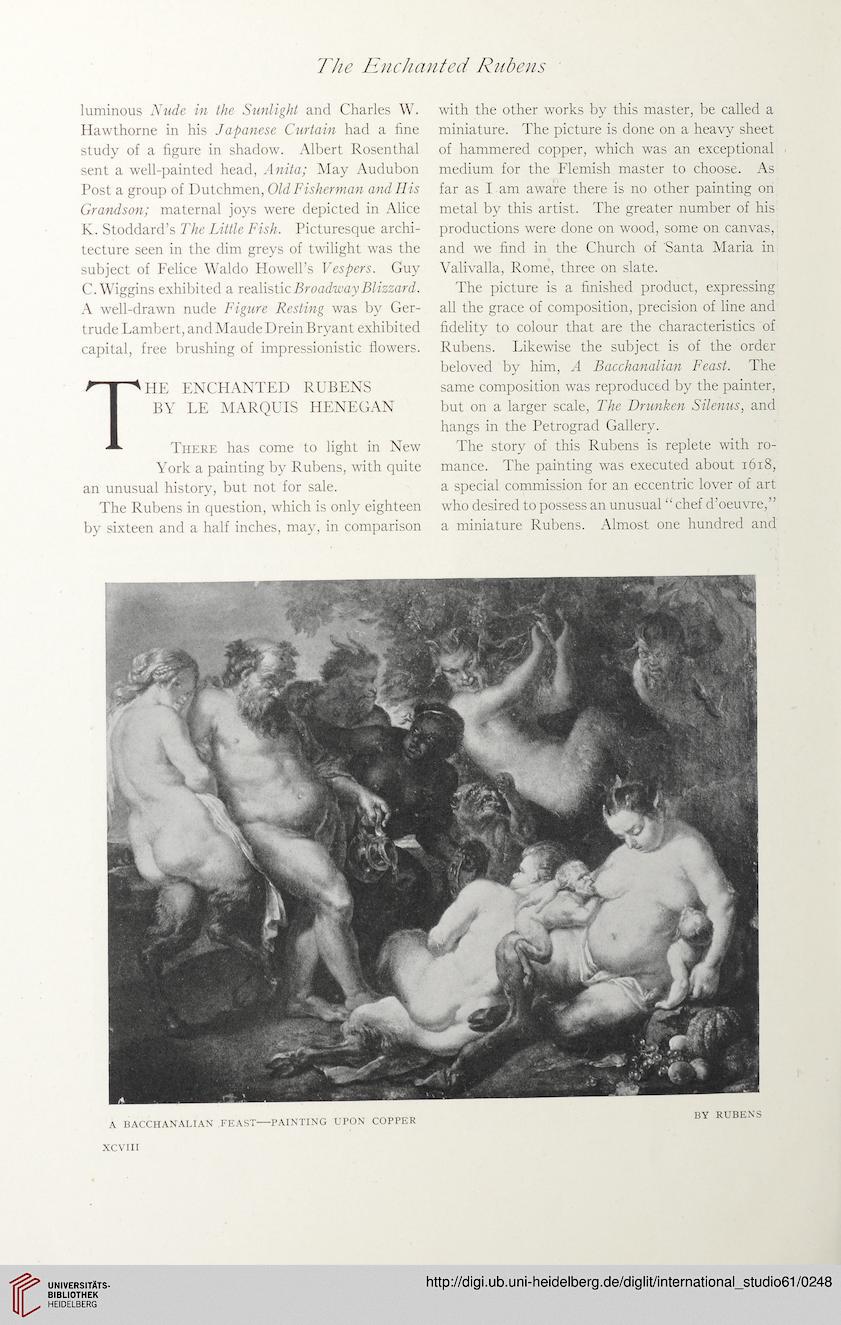 luminous Nude in the Sunlight and Charles W.
Hawthorne in his Japanese Curtain had a fine
study of a figure in shadow. Albert Rosenthal
sent a well-painted head, Anita; May Audubon
Post a group of Dutchmen, OldFisherman andllis
Grandson; maternal joys were depicted in Alice
K. Stoddard’s The Little Fish. Picturesque archi-
tecture seen in the dim greys of twilight was the
subject of Felice Waldo Howell’s Vespers. Guy
C. Wiggins exhibited a realistic Broadway Blizzard.
A well-drawn nude Figure Resting was by Ger-
trude Lambert, and Maude Drein Bryant exhibited
capital, free brushing of impressionistic flowers.
I ^HE ENCHANTED RUBENS
BY LE MARQUIS HENEGAN
There has come to light in New
York a painting by Rubens, with quite
an unusual history, but not for sale.
The Rubens in question, which is only eighteen
by sixteen and a half inches, may, in comparison

with the other works by this master, be called a
miniature. The picture is done on a heavy sheet
of hammered copper, which was an exceptional
medium for the Flemish master to choose. As
far as I am aware there is no other painting on
metal by this artist. The greater number of his
productions were done on wood, some on canvas,
and we find in the Church of Santa Maria in
Valivalla, Rome, three on slate.
The picture is a finished product, expressing
all the grace of composition, precision of line and
fidelity to colour that are the characteristics of
Rubens. Likewise the subject is of the order
beloved by him, A Bacchanalian Feast. The
same composition was reproduced by the painter,
but on a larger scale, The Drunken Silenus, and
hangs in the Petrograd Gallery.
The story of this Rubens is replete with ro-
mance. The painting was executed about 1618,
a special commission for an eccentric lover of art
who desired to possess an unusual “ chef d’oeuvre,”
a miniature Rubens. Almost one hundred and


A BACCHANALIAN FEAST—PAINTING UPON COPPER