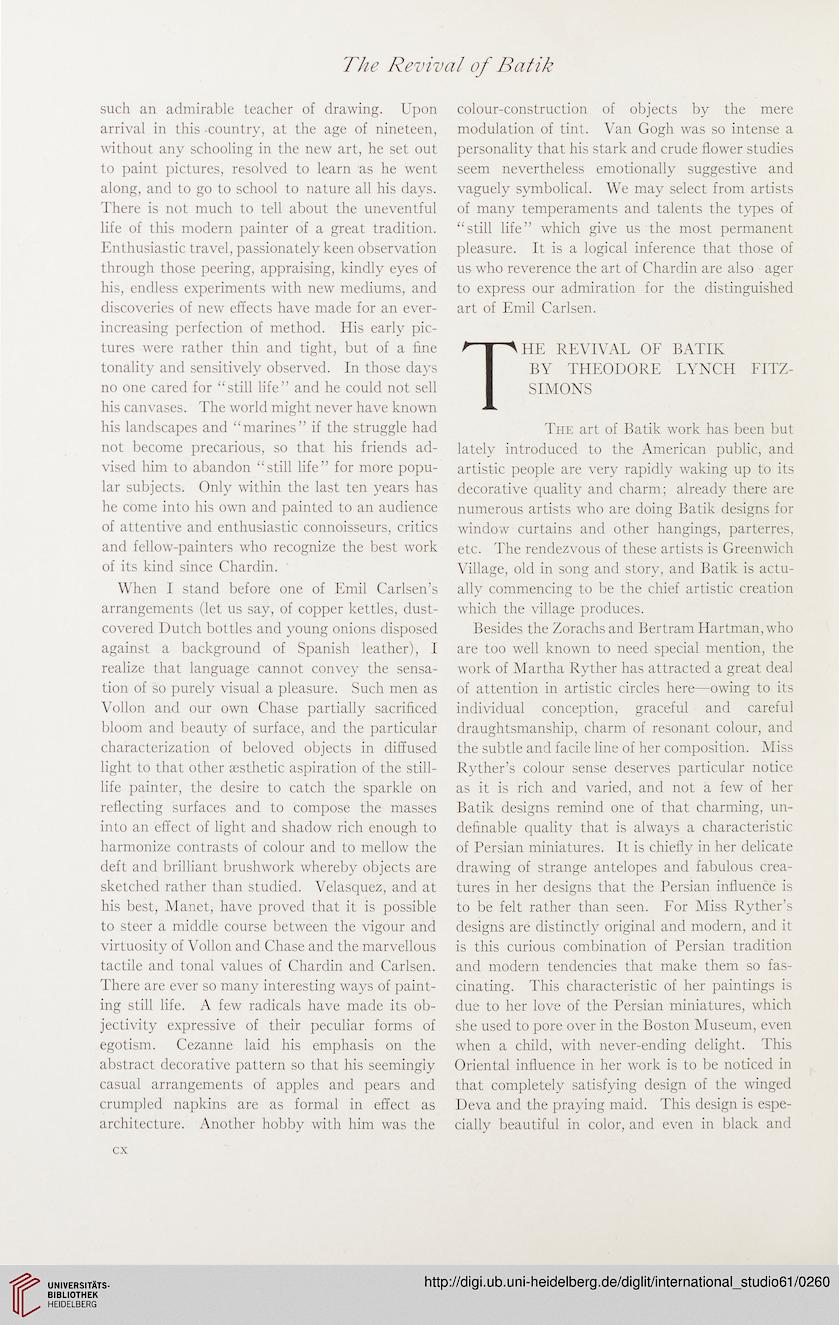 Information about OCR text
The Revival of Batik

such an admirable teacher of drawing. Upon
arrival in this country, at the age of nineteen,
without any schooling in the new art, he set out
to paint pictures, resolved to learn as he went
along, and to go to school to nature all his days.
There is not much to tell about the uneventful
life of this modern painter of a great tradition.
Enthusiastic travel, passionately keen observation
through those peering, appraising, kindly eyes of
his, endless experiments with new mediums, and
discoveries of new effects have made for an ever-
increasing perfection of method. His early pic-
tures were rather thin and tight, but of a fine
tonality and sensitively observed. In those days
no one cared for “still life” and he could not sell
his canvases. The world might never have known
his landscapes and “marines” if the struggle had
not become precarious, so that his friends ad-
vised him to abandon “still life” for more popu-
lar subjects. Only within the last ten years has
he come into his own and painted to an audience
of attentive and enthusiastic connoisseurs, critics
and fellow-painters who recognize the best work
of its kind since Chardin.
When I stand before one of Emil Carlsen’s
arrangements (let us say, of copper kettles, dust-
covered Dutch bottles and young onions disposed
against a background of Spanish leather), I
realize that language cannot convey the sensa-
tion of so purely visual a pleasure. Such men as
Vollon and our own Chase partially sacrificed
bloom and beauty of surface, and the particular
characterization of beloved objects in diffused
light to that other aesthetic aspiration of the still-
life painter, the desire to catch the sparkle on
reflecting surfaces and to compose the masses
into an effect of light and shadow rich enough to
harmonize contrasts of colour and to mellow the
deft and brilliant brushwork whereby objects are
sketched rather than studied. Velasquez, and at
his best, Manet, have proved that it is possible
to steer a middle course between the vigour and
virtuosity of Vollon and Chase and the marvellous
tactile and tonal values of Chardin and Carlsen.
There are ever so many interesting ways of paint-
ing still life. A few radicals have made its ob-
jectivity expressive of their peculiar forms of
egotism. Cezanne laid his emphasis on the
abstract decorative pattern so that his seemingly
casual arrangements of apples and pears and
crumpled napkins are as formal in effect as
architecture. Another hobby with him was the
ex

colour-construction of objects by the mere
modulation of tint. Van Gogh was so intense a
personality that his stark and crude flower studies
seem nevertheless emotionally suggestive and
vaguely symbolical. We may select from artists
of many temperaments and talents the types of
“still life” which give us the most permanent
pleasure. It is a logical inference that those of
us who reverence the art of Chardin are also ager
to express our admiration for the distinguished
art of Emil Carlsen.
rT^HE REVIVAL OF BATIK
BY THEODORE LYNCH FITZ-
SIMONS
The art of Batik work has been but
lately introduced to the American public, and
artistic people are very rapidly waking up to its
decorative quality and charm; already there are
numerous artists who are doing Batik designs for
window curtains and other hangings, parterres,
etc. The rendezvous of these artists is Greenwich
Village, old in song and story, and Batik is actu-
ally commencing to be the chief artistic creation
which the village produces.
Besides the Zorachs and Bertram Hartman, who
are too well known to need special mention, the
work of Martha Ryther has attracted a great deal
of attention in artistic circles here—owing to its
individual conception, graceful and careful
draughtsmanship, charm of resonant colour, and
the subtle and facile line of her composition. Miss
Ryther’s colour sense deserves particular notice
as it is rich and varied, and not a few of her
Batik designs remind one of that charming, un-
definable quality that is always a characteristic
of Persian miniatures. It is chiefly in her delicate
drawing of strange antelopes and fabulous crea-
tures in her designs that the Persian influence is
to be felt rather than seen. For Miss Ryther’s
designs are distinctly original and modern, and it
is this curious combination of Persian tradition
and modern tendencies that make them so fas-
cinating. This characteristic of her paintings is
due to her love of the Persian miniatures, which
she used to pore over in the Boston Museum, even
when a child, with never-ending delight. This
Oriental influence in her work is to be noticed in
that completely satisfying design of the winged
Deva and the praying maid. This design is espe-
cially beautiful in color, and even in black and