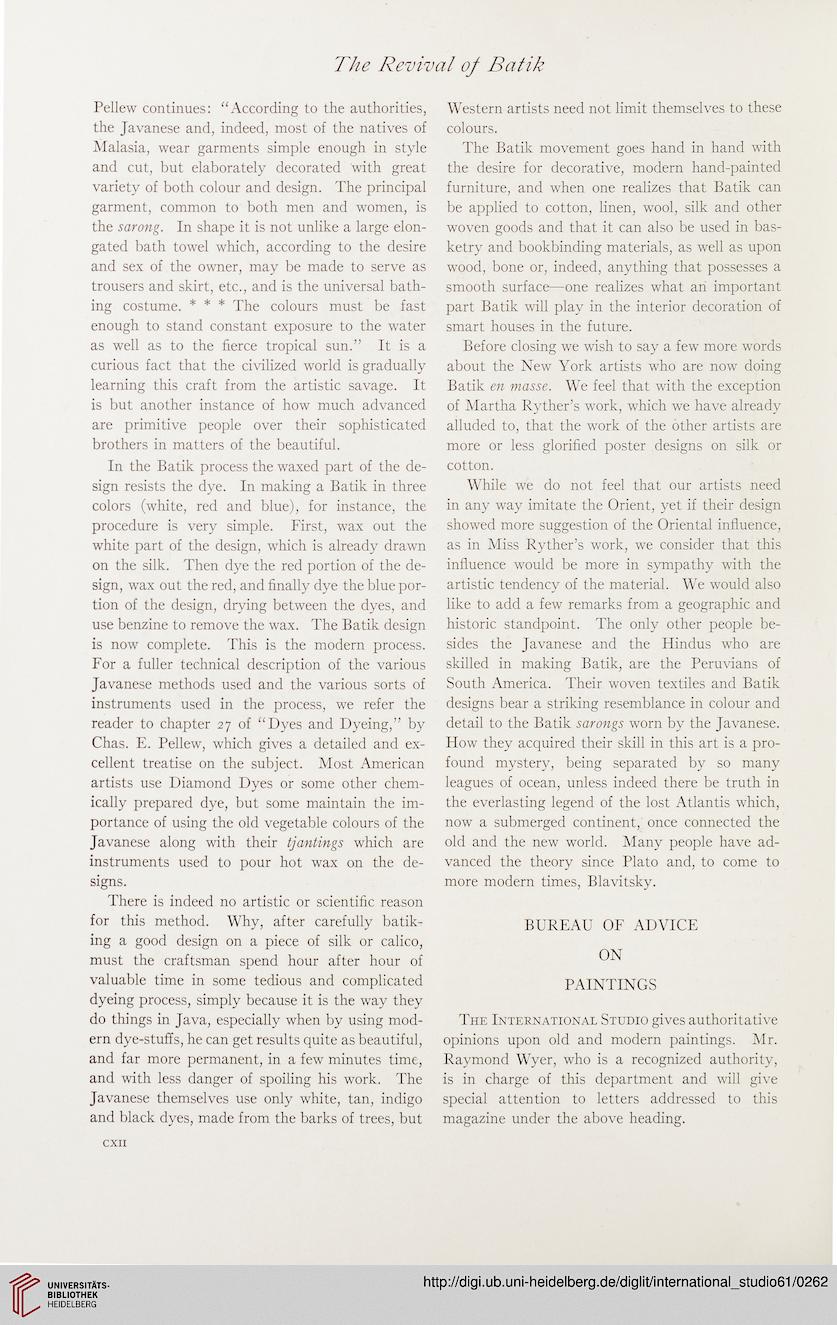 Information about OCR text
The Revival of Batik

Pellew continues: “According to the authorities,
the Javanese and, indeed, most of the natives of
Malasia, wear garments simple enough in style
and cut, but elaborately decorated with great
variety of both colour and design. The principal
garment, common to both men and women, is
the sarong. In shape it is not unlike a large elon-
gated bath towel which, according to the desire
and sex of the owner, may be made to serve as
trousers and skirt, etc., and is the universal bath-
ing costume. * * * The colours must be fast
enough to stand constant exposure to the water
as well as to the fierce tropical sun.” It is a
curious fact that the civilized world is gradually
learning this craft from the artistic savage. It
is but another instance of how much advanced
are primitive people over their sophisticated
brothers in matters of the beautiful.
In the Batik process the waxed part of the de-
sign resists the dye. In making a Batik in three
colors (white, red and blue), for instance, the
procedure is very simple. First, wax out the
white part of the design, which is already drawn
on the silk. Then dye the red portion of the de-
sign, wax out the red, and finally dye the blue por-
tion of the design, drying between the dyes, and
use benzine to remove the wax. The Batik design
is now complete. This is the modern process.
For a fuller technical description of the various
Javanese methods used and the various sorts of
instruments used in the process, we refer the
reader to chapter 27 of “Dyes and Dyeing,” by
Chas. E. Pellew, which gives a detailed and ex-
cellent treatise on the subject. Most American
artists use Diamond Dyes or some other chem-
ically prepared dye, but some maintain the im-
portance of using the old vegetable colours of the
Javanese along with their tjantings which are
instruments used to pour hot wax on the de-
signs.
There is indeed no artistic or scientific reason
for this method. Why, after carefully batik-
ing a good design on a piece of silk or calico,
must the craftsman spend hour after hour of
valuable time in some tedious and complicated
dyeing process, simply because it is the way they
do things in Java, especially when by using mod-
ern dye-stuffs, he can get results quite as beautiful,
and far more permanent, in a few minutes time,
and with less danger of spoiling his work. The
Javanese themselves use only white, tan, indigo
and black dyes, made from the barks of trees, but

Western artists need not limit themselves to these
colours.
The Batik movement goes hand in hand with
the desire for decorative, modern hand-painted
furniture, and when one realizes that Batik can
be applied to cotton, linen, wool, silk and other
woven goods and that it can also be used in bas-
ketry and bookbinding materials, as well as upon
wood, bone or, indeed, anything that possesses a
smooth surface—one realizes what ah important
part Batik will play in the interior decoration of
smart houses in the future.
Before closing we wish to say a few more words
about the New York artists who are now doing
Batik en masse. We feel that with the exception
of Martha Ryther’s work, which we have already
alluded to, that the work of the other artists are
more or less glorified poster designs on silk or
cotton.
While we do not feel that our artists need
in any way imitate the Orient, yet if their design
showed more suggestion of the Oriental influence,
as in Miss Ryther’s work, we consider that this
influence would be more in sympathy with the
artistic tendency of the material. We would also
like to add a few remarks from a geographic and
historic standpoint. The only other people be-
sides the Javanese and the Hindus who are
skilled in making Batik, are the Peruvians of
South America. Their woven textiles and Batik
designs bear a striking resemblance in colour and
detail to the Batik sarongs worn by the Javanese.
How they acquired their skill in this art is a pro-
found mystery, being separated by so many
leagues of ocean, unless indeed there be truth in
the everlasting legend of the lost Atlantis which,
now a submerged continent, once connected the
old and the new world. Many people have ad-
vanced the theory since Plato and, to come to
more modern times, Blavitsky.
BUREAU OF ADVICE
ON
PAINTINGS
The International Studio gives authoritative
opinions upon old and modern paintings. Mr.
Raymond Wyer, who is a recognized authority,
is in charge of this department and will give
special attention to letters addressed to this
magazine under the above heading.