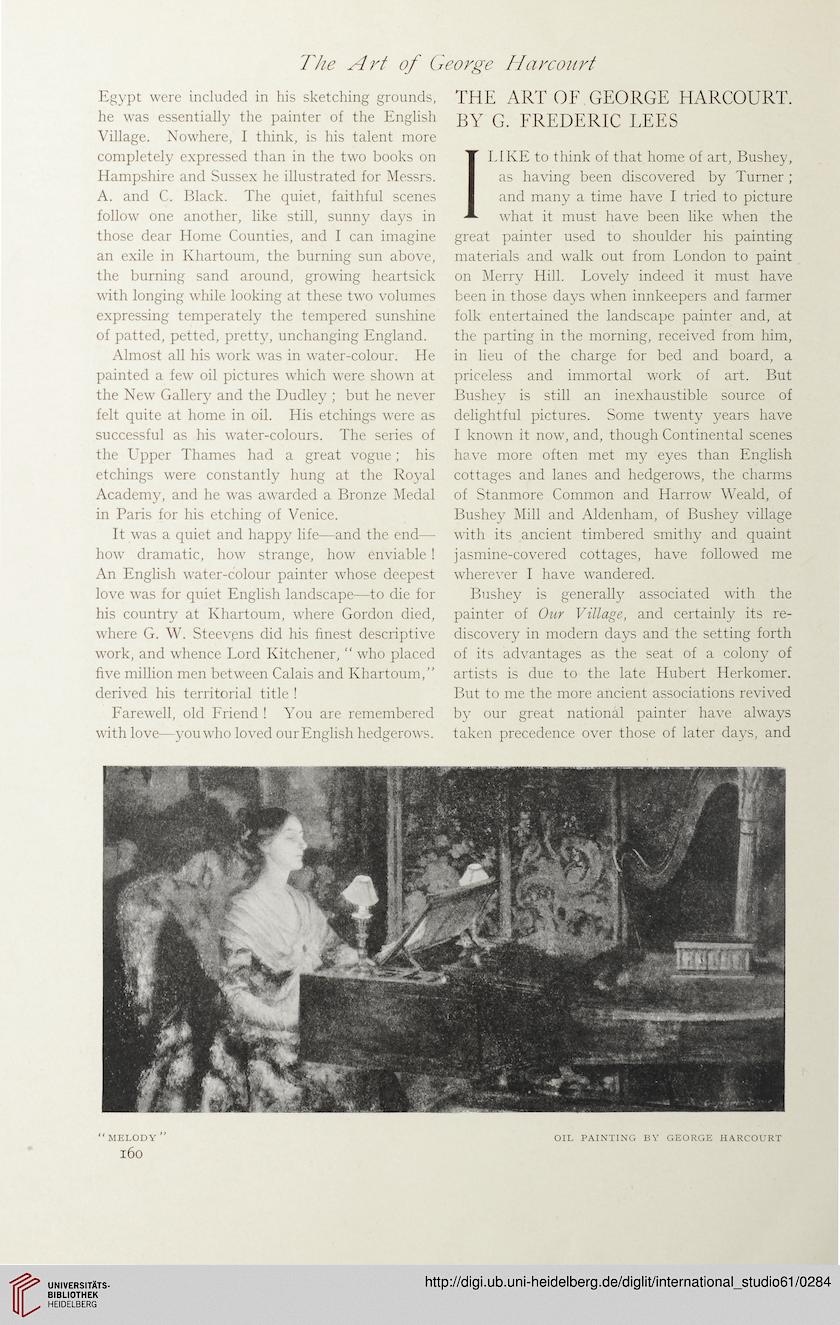 Information about OCR text
The Art of George Harcourt

Egypt were included in his sketching grounds,
he was essentially the painter of the English
Village. Nowhere, I think, is his talent more
completely expressed than in the two books on
Hampshire and Sussex he illustrated for Messrs.
A. and C. Black. The quiet, faithful scenes
follow one another, like still, sunny days in
those dear Home Counties, and I can imagine
an exile in Khartoum, the burning sun above,
the burning sand around, growing heartsick
with longing while looking at these two volumes
expressing temperately the tempered sunshine
of patted, petted, pretty, unchanging England.
Almost all his work was in water-colour. He
painted a few oil pictures which were shown at
the New Gallery and the Dudley ; but he never
felt quite at home in oil. His etchings were as
successful as his water-colours. The series of
the Upper Thames had a great vogue; his
etchings were constantly hung at the Royal
Academy, and he was awarded a Bronze Medal
in Paris for his etching of Venice.
It was a quiet and happy life—and the end—
how dramatic, how strange, how enviable !
An English water-colour painter whose deepest
love was for quiet English landscape—to die for
his country at Khartoum, where Gordon died,
where G. W. Steevens did his finest descriptive
work, and whence Lord Kitchener, " who placed
five million men between Calais and Khartoum,”
derived his territorial title !
Farewell, old Friend ! You are remembered
with love—you who loved our English hedgerows.

THE ART OF GEORGE HARCOURT.
BY G. FREDERIC LEES
I LIKE to think of that home of art, Bushey,
as having been discovered by Turner ;
and many a time have I tried to picture
what it must have been like when the
great painter used to shoulder his painting
materials and walk out from London to paint
on Merry Hill. Lovely indeed it must have
been in those days when innkeepers and farmer
folk entertained the landscape painter and, at
the parting in the morning, received from him,
in lieu of the charge for bed and board, a
priceless and immortal work of art. But
Bushey is still an inexhaustible source of
delightful pictures. Some twenty years have
I known it now, and, though Continental scenes
have more often met my eyes than English
cottages and lanes and hedgerows, the charms
of Stanmore Common and Harrow Weald, of
Bushey Mill and Aldenham, of Bushey village
with its ancient timbered smithy and quaint
jasmine-covered cottages, have followed me
wherever I have wandered.
Bushey is generally associated with the
painter of Our Village, and certainly its re-
discovery in modern days and the setting forth
of its advantages as the seat of a colony of
artists is due to the late Hubert Herkomer.
But to me the more ancient associations revived
by our great national painter have always
taken precedence over those of later days, and