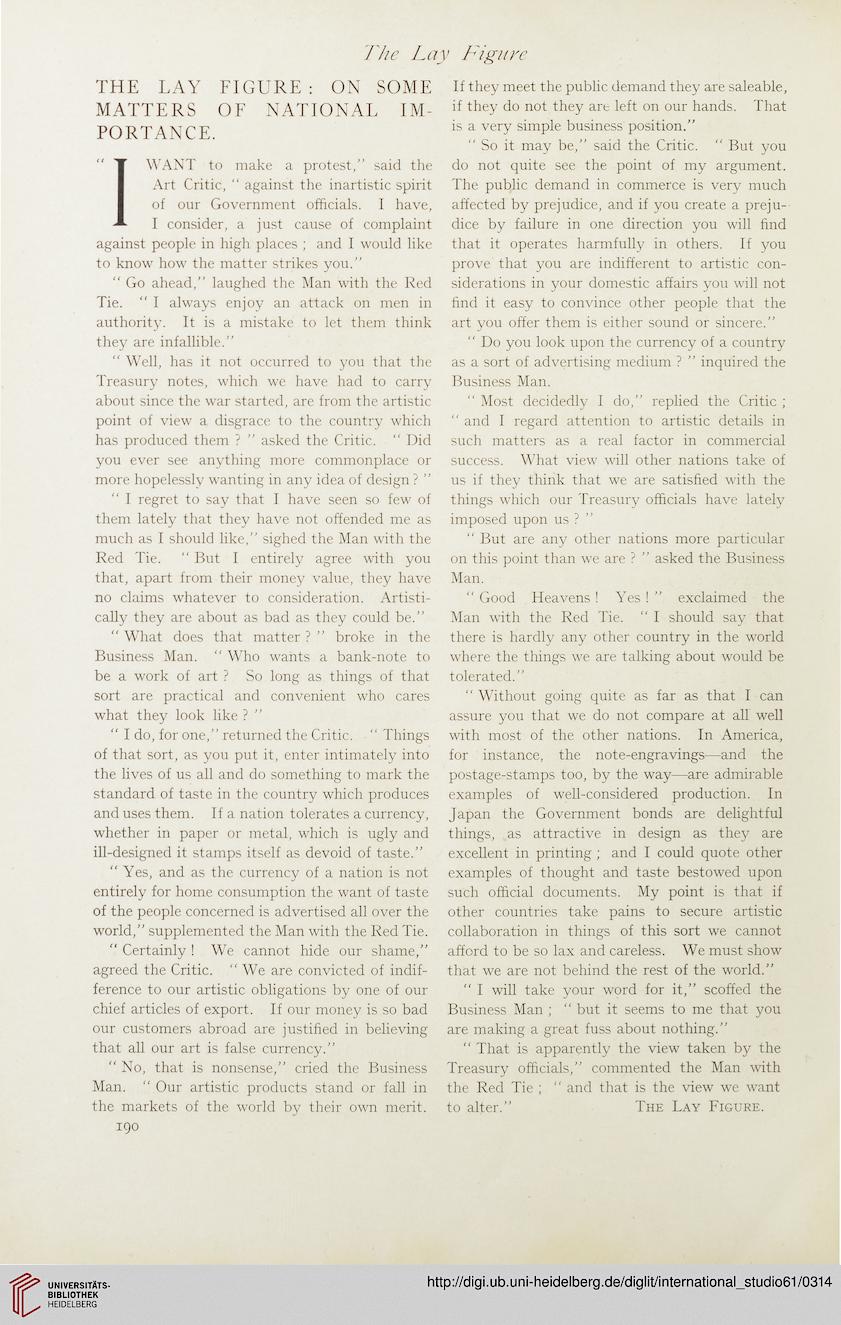 THE LAY FIGURE : ON SOME
MATTERS OF NATIONAL IM-
PORTANCE.
I WANT to make a protest," said the
Art Critic, " against the inartistic spirit
of our Government officials. I have,
I consider, a just cause of complaint
against people in high places ; and I would like
to know how the matter strikes you.”
“ Go ahead," laughed the Man with the Red
Tie. “ I always enjoy an attack on men in
authority. It is a mistake to let them think
they are infallible.”
" Well, has it not occurred to you that the
Treasury notes, which we have had to carry
about since the war started, are from the artistic
point of view a disgrace to the country which
has produced them ? " asked the Critic. " Did
you ever see anything more commonplace or
more hopelessly wanting in any idea of design ? "
I regret to say that I have seen so few of
them lately that they have not offended me as
much as I should like," sighed the Man with the
Red Tie. " But I entirely agree with you
that, apart from their money value, they have
no claims whatever to consideration. Artisti-
cally they are about as bad as they could be."
" What does that matter ? " broke in the
Business Man. " Who wants a bank-note to
be a work of art ? So long as things of that
sort are practical and convenient who cares
what they look like ? "
" I do, for one," returned the Critic. " Things
of that sort, as you put it, enter intimately into
the lives of us all and do something to mark the
standard of taste in the country which produces
and uses them. If a nation tolerates a currency,
whether in paper or metal, which is ugly and
ill-designed it stamps itself as devoid of taste."
“ Yes, and as the currency of a nation is not
entirely for home consumption the want of taste
of the people concerned is advertised all over the
world," supplemented the Man with the Red Tie.
“ Certainly ! We cannot hide our shame,"
agreed the Critic. "We are convicted of indif-
ference to our artistic obligations by one of our
chief articles of export. If our money is so bad
our customers abroad are justified in believing
that all our art is false currency."
" No, that is nonsense," cried the Business
Man. " Our artistic products stand or fall in
the markets of the world by their own merit.
190

If they meet the public demand they are saleable,
if they do not they are left on our hands. That
is a very simple business position."
" So it may be,” said the Critic. “ But you
do not quite see the point of my argument.
The public demand in commerce is very much
affected by prejudice, and if you create a preju-
dice by failure in one direction you will find
that it operates harmfully in others. If you
prove that you are indifferent to artistic con-
siderations in your domestic affairs you will not
find it easy to convince other people that the
art you offer them is either sound or sincere."
" Do you look upon the currency of a country
as a sort of advertising medium ? ” inquired the
Business Man.
“ Most decidedly I do,” replied the Critic ;
" and I regard attention to artistic details in
such matters as a real factor in commercial
success. What view will other nations take of
us if they think that we are satisfied with the
things which our Treasury officials have lately
imposed upon us ?
“ But are any other nations more particular
on this point than we are ? ” asked the Business
Man.
" Good Heavens ! Yes ! ” exclaimed the
Man with the Red Tie. “ I should say that
there is hardly any other country in the world
where the things we are talking about would be
tolerated.”
" Without going quite as far as that I can
assure you that we do not compare at all well
with most of the other nations. In America,
for instance, the note-engravings—and the
postage-stamps too, by the way—are admirable
examples of well-considered production. In
Japan the Government bonds are delightful
things, as attractive in design as they are
excellent in printing ; and I could quote other
examples of thought and taste bestowed upon
such official documents. My point is that if
other countries take pains to secure artistic
collaboration in things of this sort we cannot
afford to be so lax and careless. We must show
that we are not behind the rest of the world."
" I will take your word for it,” scoffed the
Business Man ; " but it seems to me that you
are making a great fuss about nothing."
" That is apparently the view taken by the
Treasury officials," commented the Man with
the Red Tie ; " and that is the view we want
to alter.” The Lay Figure.