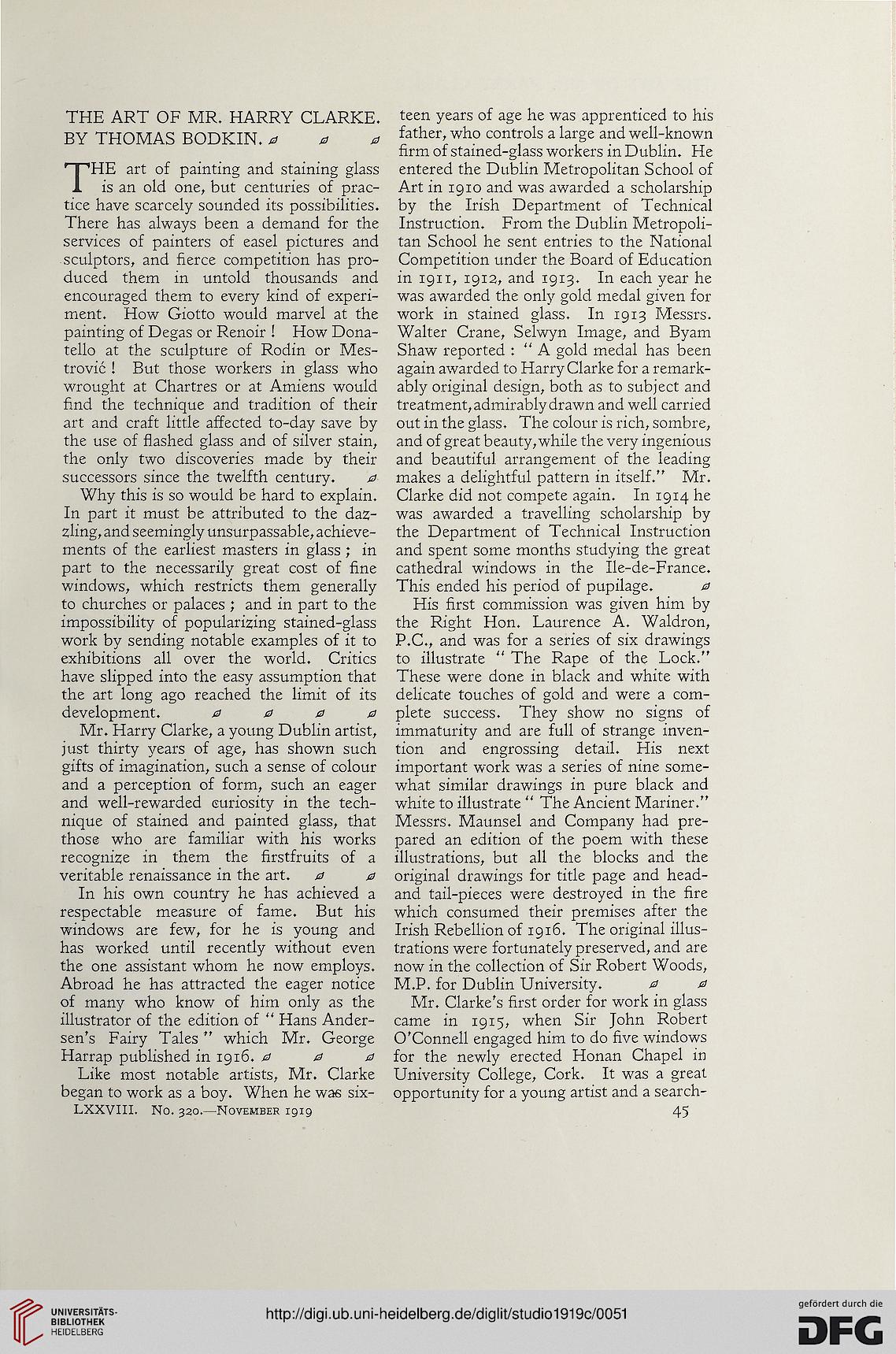 Information about OCR text
THE ART OF MR. HARRY CLARKE.
BY THOMAS BODKIN. 000

THE art of painting and staining glass
is an old one, but centuries of prac-
tice have scarcely sounded its possibilities.
There has always been a demand for the
services of painters of easel pictures and
sculptors, and fierce competition has pro-
duced them in untold thousands and
encouraged them to every kind of experi-
ment. How Giotto would marvel at the
painting of Degas or Renoir ! How Dona-
tello at the sculpture of Rodin or Mes-
trovic ! But those workers in glass who
wrought at Chartres or at Amiens would
find the technique and tradition of their
art and craft little affected to-day save by
the use of flashed glass and of silver stain,
the only two discoveries made by their
successors since the twelfth century. 0
Why this is so would be hard to explain.
In part it must be attributed to the daz-
zling, and seemingly unsurpassable, achieve-
ments of the earliest masters in glass ; in
part to the necessarily great cost of fine
windows, which restricts them generally
to churches or palaces ; and in part to the
impossibility of popularizing stained-glass
work by sending notable examples of it to
exhibitions all over the world. Critics
have slipped into the easy assumption that
the art long ago reached the limit of its
development. 0000

Mr. Harry Clarke, a young Dublin artist,
just thirty years of age, has shown such
gifts of imagination, such a sense of colour
and a perception of form, such an eager
and well-rewarded curiosity in the tech-
nique of stained and painted glass, that
those who are familiar with his works
recognize in them the firstfruits of a
veritable renaissance in the art. 0 0

In his own country he has achieved a
respectable measure of fame. But his
windows are few, for he is young and
has worked until recently without even
the one assistant whom he now employs.
Abroad he has attracted the eager notice
of many who know of him only as the
illustrator of the edition of “ Hans Ander-
sen's Fairy Tales " which Mr. George
Harrap published in 1916. 000
Like most notable artists, Mr. Clarke
began to work as a boy. When he was six-
LXXVIII. No. 320.—November 1919

teen years of age he was apprenticed to his
father, who controls a large and well-known
firm of stained-glass workers in Dublin. He
entered the Dublin Metropolitan School of
Art in 1910 and was awarded a scholarship
by the Irish Department of Technical
Instruction. From the Dublin Metropoli-
tan School he sent entries to the National
Competition under the Board of Education
in 1911, 1912, and 1913. In each year he
was awarded the only gold medal given for
work in stained glass. In 1913 Messrs.
Walter Crane, Selwyn Image, and Byam
Shaw reported : “ A gold medal has been
again awarded to Harry Clarke for a remark-
ably original design, both as to subject and
treatment, admirably drawn and well carried
out in the glass. The colour is rich, sombre,
and of great beauty, while the very ingenious
and beautiful arrangement of the leading
makes a delightful pattern in itself." Mr.
Clarke did not compete again. In 1914 he
was awarded a travelling scholarship by
the Department of Technical Instruction
and spent some months studying the great
cathedral windows in the Ile-de-France.
This ended his period of pupilage. 0
His first commission was given him by
the Right Hon. Laurence A. Waldron,
P.C., and was for a series of six drawings
to illustrate ** The Rape of the Lock."
These were done in black and white with
delicate touches of gold and were a com-
plete success. They show no signs of
immaturity and are full of strange inven-
tion and engrossing detail. His next
important work was a series of nine some-
what similar drawings in pure black and
white to illustrate ** The Ancient Mariner."
Messrs. Maunsel and Company had pre-
pared an edition of the poem with these
illustrations, but all the blocks and the
original drawings for title page and head-
and tail-pieces were destroyed in the fire
which consumed their premises after the
Irish Rebellion of 1916. The original illus-
trations were fortunately preserved, and are
now in the collection of Sir Robert Woods,
M.P. for Dublin University. 0 0

Mr. Clarke's first order for work in glass
came in 1915, when Sir John Robert
O'Connell engaged him to do five windows
for the newly erected Honan Chapel in
University College, Cork. It was a great
opportunity for a young artist and a search-