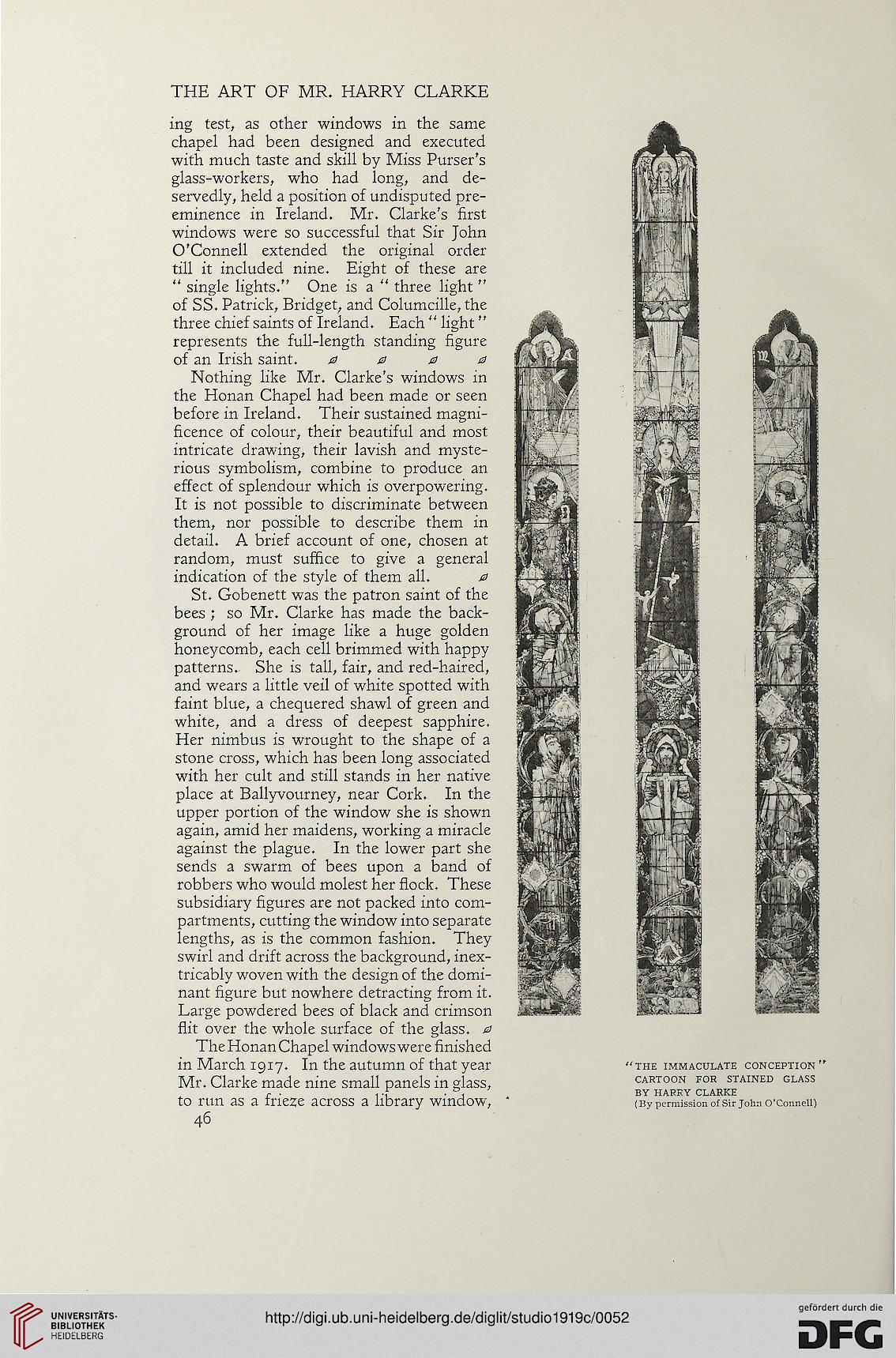 Information about OCR text
THE ART OF MR. HARRY CLARKE

ing test, as other windows in the same
chapel had been designed and executed
with much taste and skill by Miss Purser's
glass-workers, who had long, and de-
servedly, held a position of undisputed pre-
eminence in Ireland. Mr. Clarke's first
windows were so successful that Sir John
O'Connell extended the original order
till it included nine. Eight of these are
44 single lights." One is a 44 three light "
of SS. Patrick, Bridget, and Columcille, the
three chief saints of Ireland. Each44 light"
represents the full-length standing figure
of an Irish saint. 0000
Nothing like Mr. Clarke's windows in
the Honan Chapel had been made or seen
before in Ireland. Their sustained magni-
ficence of colour, their beautiful and most
intricate drawing, their lavish and myste-
rious symbolism, combine to produce an
effect of splendour which is overpowering.
It is not possible to discriminate between
them, nor possible to describe them in
detail. A brief account of one, chosen at
random, must suffice to give a general
indication of the style of them all. 0
St. Gobenett was the patron saint of the
bees ; so Mr. Clarke has made the back-
ground of her image like a huge golden
honeycomb, each cell brimmed with happy
patterns. She is tall, fair, and red-haired,
and wears a little veil of white spotted with
faint blue, a chequered shawl of green and
white, and a dress of deepest sapphire.
Her nimbus is wrought to the shape of a
stone cross, which has been long associated
with her cult and still stands in her native
place at Ballyvourney, near Cork. In the
upper portion of the window she is shown
again, amid her maidens, working a miracle
against the plague. In the lower part she
sends a swarm of bees upon a band of
robbers who would molest her flock. These
subsidiary figures are not packed into com-
partments, cutting the window into separate
lengths, as is the common fashion. They
swirl and drift across the background, inex-
tricably woven with the design of the domi-
nant figure but nowhere detracting from it.
Large powdered bees of black and crimson
flit over the whole surface of the glass. 0
The Honan Chapel windows were finished
in March 1917. In the autumn of that year
Mr. Clarke made nine small panels in glass,
to run as a frieze across a library window,
46