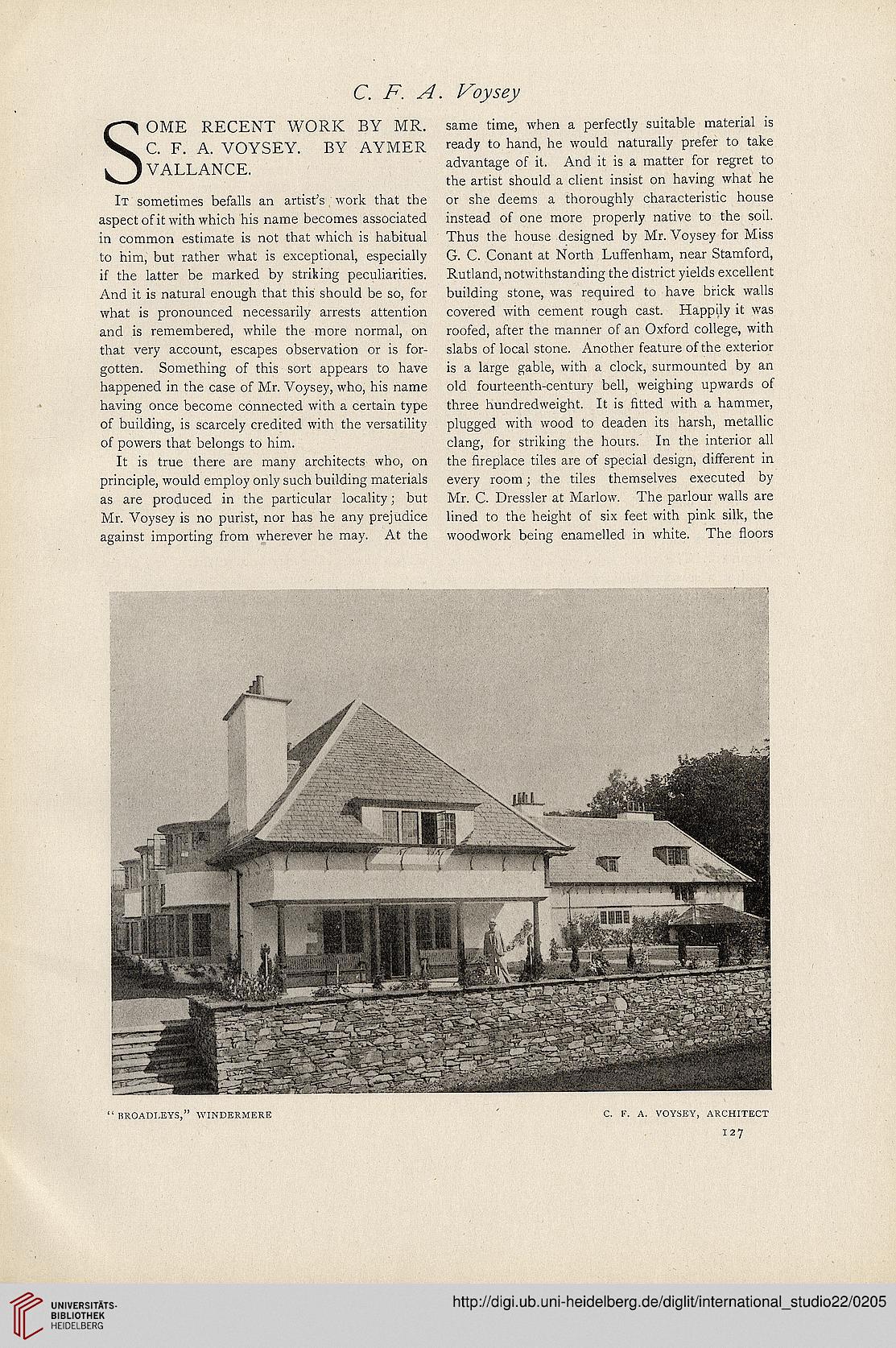 f^OME RECENT WORK BY MR.
C. F. A. VOYSEY. BY AYMER
VALLANCE.
IT sometimes befalls an artist's work that the
aspect ofit with which his name becomes associated
in common estimate is not that which is habitual
to him, but rather what is exceptional, especially
if the latter be marked by striking peculiarities.
And it is natural enough that this should be so, for
what is pronounced necessarily arrests attention
and is remembered, while the more normal, on
that very account, escapes observation or is for-
gotten. Something of this sort appears to have
happened in the case of Mr. Voysey, who, his name
having once become connected with a certain type
of building, is scarcely credited with the versatility
of powers that belongs to him.
It is true there are many architects who, on
principle, would employ only such building materials
as are produced in the particular locality; but
Mr. Voysey is no purist, nor has he any prejudice
against importing from wherever he may. At the

same time, when a perfectly suitable material is
ready to hand, he would naturally prefer to take
advantage of it. And it is a matter for regret to
the artist should a client insist on having what he
or she deems a thoroughly characteristic house
instead of one more properly native to the soil.
Thus the house designed by Mr. Voysey for Miss
G. C. Conant at North Luffenham, near Stamford,
Rutland, notwithstanding the district yields excellent
building stone, was required to have brick walls
covered with cement rough cast. Happily it was
roofed, after the manner of an Oxford college, with
slabs of local stone. Another feature of the exterior
is a large gable, with a clock, surmounted by an
old fourteenth-century bell, weighing upwards of
three hundredweight. It is fitted with a hammer,
plugged with wood to deaden its harsh, metallic
clang, for striking the hours. In the interior all
the fireplace tiles are of special design, different in
every room; the tiles themselves executed by
Mr. C. Dressier at Marlow. The parlour walls are
lined to the height of six feet with pink silk, the
woodwork being enamelled in white. The floors