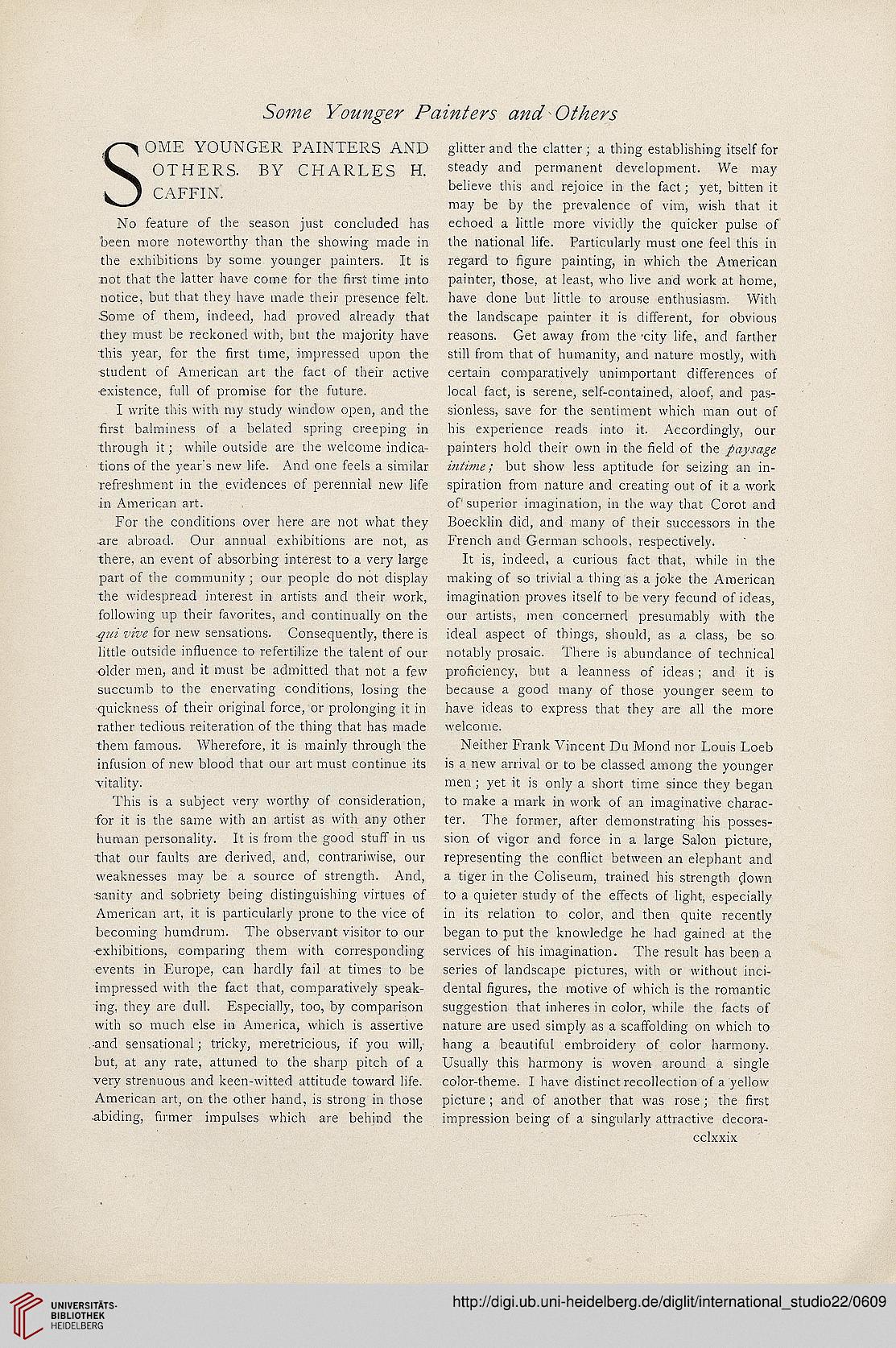 OME YOUNGER PAINTERS AND
OTHERS. BY CHARLES H.
CAFFIN.
No feature of the season just concluded has
been more noteworthy than the showing made in
the exhibitions by some younger painters. It is
not that the iatter have come for the first time into
notice, but that they have made their presence feit.
Some of them, indeed, had proved aiready that
they must be reckoned with, but the majority have
this year, for the first tune, impressed upon the
student of American art the fact of their active
-existence, full of promise for the future.
I write this with my study window open, and the
first balminess of a belated spring creeping in
through it; while outside are the welcome indica-
tions of the year's new life. And one feels a similar
refreshment in the evidences of perennial new life
in American art.
For the conditions over here are not what they
are abroad. Our annual exhibitions are not, as
there, an event of absorbing interest to a very large
part of the community ; our people do not display
the widespread interest in artists and their work,
following up their favorites, and continually on the
MW for new sensations. Consequently, there is
little outside influence to refertilize the talent of our
older men, and it must be admitted that not a few
succumb to the enervating conditions, losing the
quickness of their original force, or prolonging it in
rather tedious reiteration of the thing that has made
them famous. Wherefore, it is mainly through the
infusion of new blood that our art must continue its
vitality.
This is a subject very worthy of consideration,
for it is the same with an artist as with any other
human personality. It is from the good stuff in us
that our faults are derived, and, contrariwise, our
weaknesses may be a source of strength. And,
-sanity and sobriety being distinguishing virtues of
American art, it is particularly prone to the vice of
becoming humdrum. The observant visitor to our
exhibitions, comparing them with corresponding
events in Europe, can hardly fail at times to be
impressed with the fact that, comparatively speak-
ing, they are dull. Especially, too, by comparison
with so much else in America, which is assertive
and sensational; tricky, meretricious, if you will,
but, at any rate, attuned to the sharp pitch of a
very strenuous and keen-witted attitude toward life.
American art, on the other hand, is strong in those
abiding, firmer impulses which are behind the

glitter and the clatter ; a thing establishing itself for
steady and permanent development. We may
believe this and rejoice in the fact; yet, bitten it
may be by the prevalence of vim, wish that it
echoed a little more vividly the quicker pulse of
the national life. Particularly must one feel this in
regard to figure painting, in which the American
painter, those, at least, who live and work at home,
have done but little to arouse enthusiasm. With
the landscape painter it is different, for obvious
reasons. Get away from the 'city life, and farther
still from that of humanity, and nature mostly, with
certain comparatively unimportant differences of
local fact, is serene, self-contained, aloof, and pas-
sionless, save for the sentiment which man out of
his experience reads into it. Accordingly, our
painters hold their own in the held of the
but show less aptitude for seizing an in-
spiration from nature and creating out of it a work
of superior imagination, in the way that Corot and
Boecklin did, and many of their successors in the
French and German schools, respectively.
Itis, indeed, a curious fact that, while in the
making of so trivial a thing as a joke the American
imagination proves itself to be very fecund of ideas,
our artists, men concerned presumably with the
ideal aspect of things, should, as a class, be so
notably prosaic. There is abundance of technical
proficiency, but a leanness of ideas; and it is
because a good many of those younger seem to
have ideas to express that they are all the more
welcome.
Neither Frank Vincent Du Mond nor Louis Loeb
is a new arrival or to be classed among the younger
men ; yet it is only a short time since they began
to make a mark in work of an imaginative charac-
ter. The former, after demonstrating his posses-
sion of vigor and force in a large Salon picture,
representing the conflict between an elephant and
a tiger in the Coliseum, trained his strength down
to a quieter study of the effects of light, especially
in its relation to color, and then quite recently
began to put the knowledge he had gained at the
services of his imagination. The result has been a
series of landscape pictures, with or without inci-
dental figures, the motive of which is the romantic
suggestion that inheres in color, while the facts of
nature are used simply as a scaffolding on which to
hang a beautiful embroidery of color harmony.
Usually this harmony is woven around a single
color-theme. I have distinct recollection of a yellow
picture ; and of another that was rose; the first
impression being of a singularly attractive decora-
cclxxix