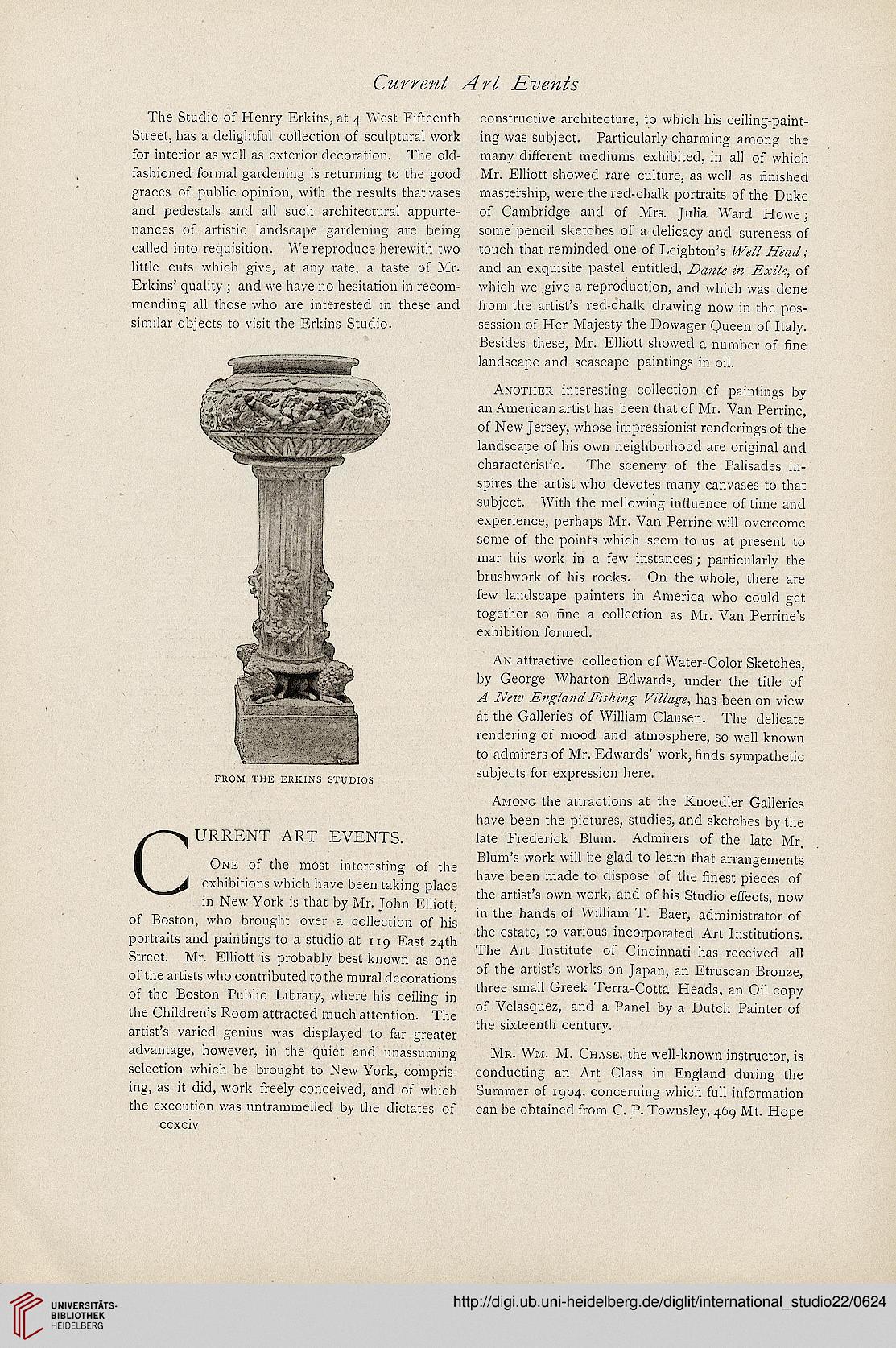 The Studio of Henry Erkins, at 4 West Fifteenth
Street, has a deiightfui collection of sculptural work
for interior as well as exterior decoration. The old-
fashioned formal gardening is returning to the good
graces of public opinion, with the results that vases
and pedestals and all such architectural appurte-
nances of artistic landscape gardening are being
called into requisition. We reproduce herewith two
little cuts which give, at any rate, a taste of Mr.
Erkins' quality ; and we have no hesitation in recom-
mending all those who are interested in these and
similar objects to visit the Erkins Studio.

URRENT ART EVENTS.
ONE of the most interesting of the
exhibitions which have been taking place
in New York is that by Mr. John Elliott,
of Boston, who brought over a collection of his
portraits and paintings to a studio at 119 East 24th
Street. Mr. Elliott is probably best known as one
of the artists who contributed to the mural decorations
of the Boston Public Library, where his ceiling in
the Children's Room attracted much attention. The
artist's varied genius was displayed to far greater
advantage, however, in the quiet and unassuming
selection which he brought to New York, compris-
ing, as it did, work freely conceived, and of which
the execution was untrammelled by the dictates of

constructive architecture, to which his ceiling-paint-
ing was subject. Particularly charming among the
many different mediums exhibited, in all of which
Mr. Elliott showed rare culture, as well as finished
mastership, were the red-chalk portraits of the Duke
of Cambridge and of Mrs. Julia Ward Howe;
some pencil sketches of a delicacy and sureness of
touch that reminded one of Leighton's 1%//
and an exquisite pastel entitled, Zkz7z/<? zfz jEVz'z^, of
which we give a reproduction, and which was done
from the artist's red-chalk drawing now in the pos-
session of Her Majesty the Dowager Queen of Italy.
Besides these, Mr. Elliott showed a number of fine
landscape and seascape paintings in oil.
ANOTHER interesting collection of paintings by
an American artist has been that of Mr. Van Perrine,
of New Jersey, whose impressionist renderings of the
landscape of his own neighborhood are original and
characteristic. The scenery of the Palisades in-
spires the artist who devotes many canvases to that
subject. With the mellowing influence of time and
experience, perhaps Mr. Van Perrine will overcome
some of the points which seem to us at present to
mar his work in a few instances; particularly the
brush work of his rocks. On the whole, there are
few landscape painters in America who could get
together so fine a collection as Mr. Van Perrine's
exhibition formed.
AN attractive collection of Water-Color Sketches,
by George Wharton Edwards, under the title of
^ Wzw ^z.g/azzrfAMzzz.g HzY/zzgi?, has been on view
at the Galleries of William Clausen. The delicate
rendering of mood and atmosphere, so well known
to admirers of Mr. Edwards' work, finds sympathetic
subjects for expression here.
AMONG the attractions at the Knoedler Galleries
have been the pictures, studies, and sketches by the
late Frederick Blum. Admirers of the late Mr.
Blum's work will be glad to learn that arrangements
have been made to dispose of the finest pieces of
the artist's own work, and of his Studio effects, now
in the hands of William T. Baer, administrator of
the estate, to various incorporated Art Institutions.
The Art Institute of Cincinnati has received all
of the artist's works on Japan, an Etruscan Bronze,
three small Greek Terra-Cotta Heads, an Oil copy
of Velasquez, and a Panel by a Dutch Painter of
the sixteenth century.
MR. WM. M. CHASE, the well-known instructor, is
conducting an Art Class in England during the
Summer of 1904, concerning which full information
can be obtained from C. P. Townsley, 469 Mt. Hope