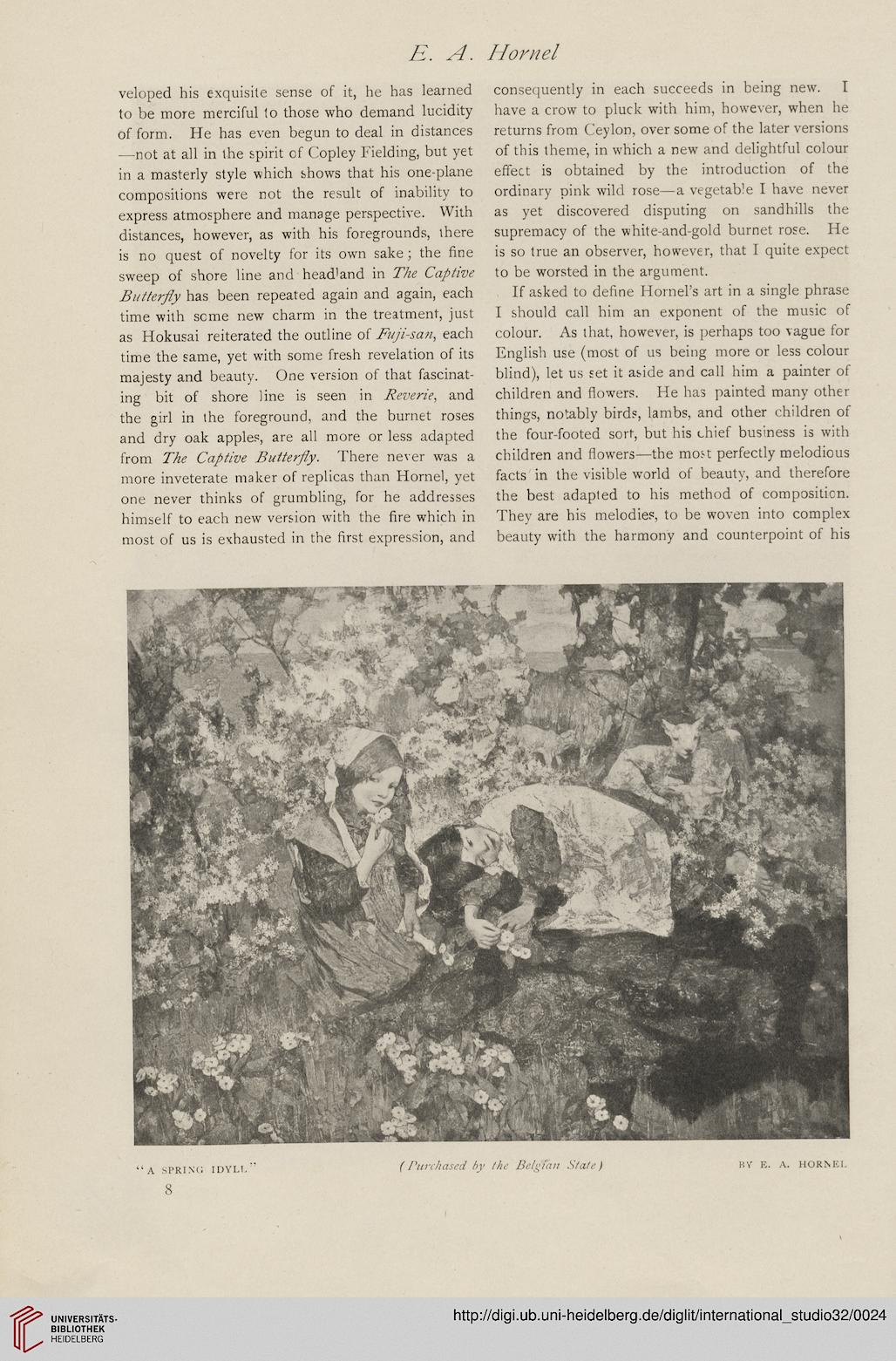 veloped his exquisite sense of it, he has learned
to be more merciful to those who demand lucidity
of form. He has even begun to deal in distances
—not at all in the spirit of Copley Fielding, but yet
in a masterly style which shows that his one-plane
compositions were not the result of inability to
express atmosphere and manage perspective. With
distances, however, as with his foregrounds, there
is no quest of novelty for its own sake; the fine
sweep of shore line and head'and in The Captive
Butterfly has been repeated again and again, each
time with seme new charm in the treatment, just
as Hokusai reiterated the outline of Fuji-san, each
time the same, yet with some fresh revelation of its
majesty and beauty. One version of that fascinat-
ing bit of shore line is seen in Reverie, and
the girl in the foreground, and the burnet roses
and dry oak apples, are all more or less adapted
from The Captive Butterfly. There never was a
more inveterate maker of replicas than Hornel, yet
one never thinks of grumbling, for he addresses
himself to each new version with the fire which in
most of us is exhausted in the first expression, and

consequently in each succeeds in being new. I
have a crow to pluck with him, however, when he
returns from Ceylon, over some of the later versions
of this theme, in which a new and delightful colour
effect is obtained by the introduction of the
ordinary pink wild rose—a vegetable I have never
as yet discovered disputing on sandhills the
supremacy of the white-and-gold burnet rose. He
is so true an observer, however, that I quite expect
to be worsted in the argument.

If asked to define Hornel’s art in a single phrase
I should call him an exponent of the music of
colour. As that, however, is perhaps too vague for
English use (most of us being more or less colour
blind), let us set it aside and call him a painter of
children and flowers. He has painted many other
things, notably birds, lambs, and other children of
the four-footed sort, but his chief business is with
children and flowers—the most perfectly melodious
facts in the visible world of beauty, and therefore
the best adapted to his method of composition.
They are his melodies, to be woven into complex
beauty with the harmony and counterpoint of his

(Purchased by the Belgian State)