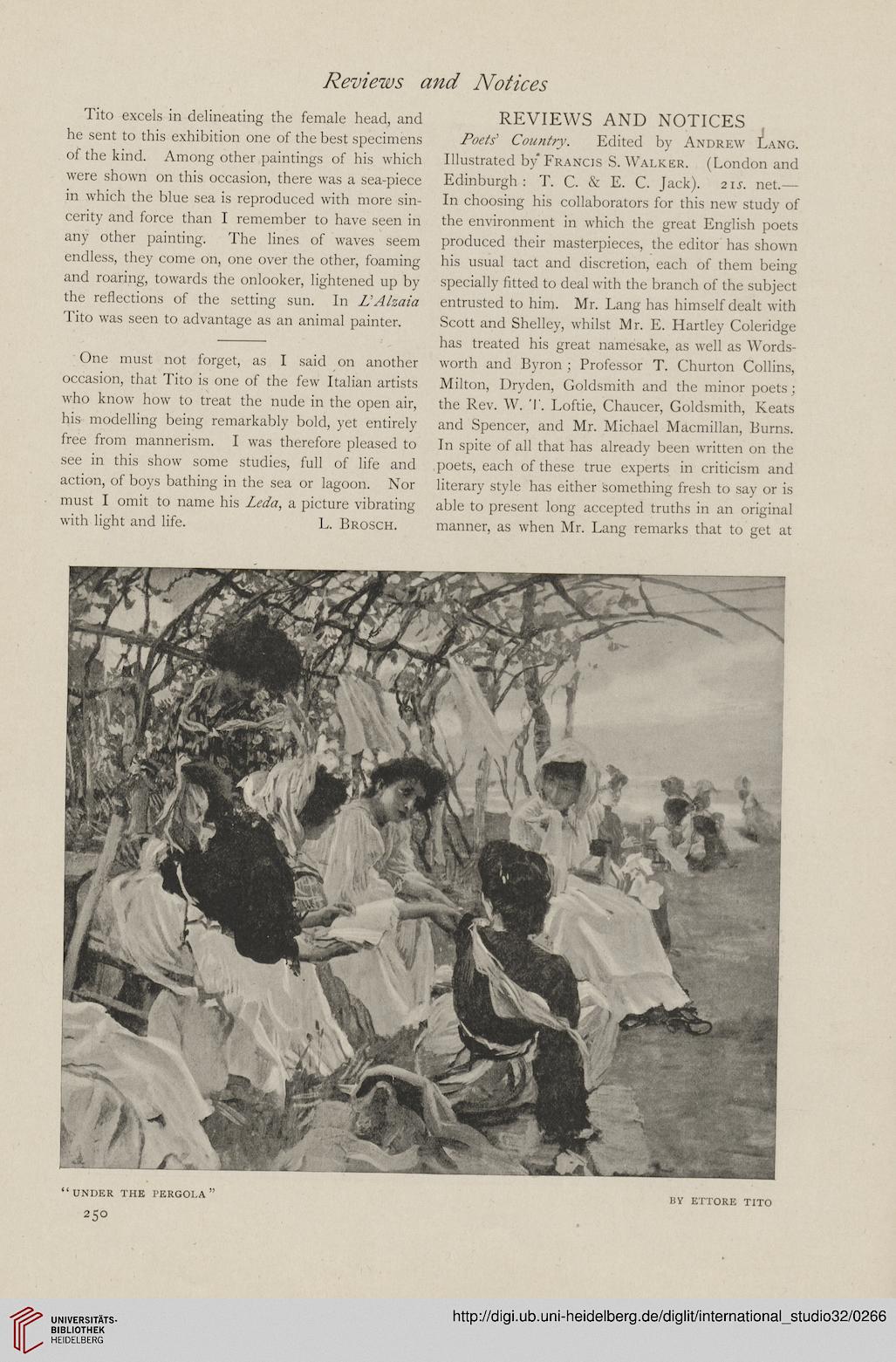 Tito excels in delineating the female head, and
he sent to this exhibition one of the best specimens
of the kind. Among other paintings of his which
were shown on this occasion, there was a sea-piece
in which the blue sea is reproduced with more sin-
cerity and force than I remember to have seen in
any other painting. The lines of waves seem
endless, they come on, one over the other, foaming
and roaring, towards the onlooker, lightened up by
the reflections of the setting sun. In L’Alzaia
Tito was seen to advantage as an animal painter.

One must not forget, as I said on another
occasion, that Tito is one of the few Italian artists
who know how to treat the nude in the open air,
his modelling being remarkably bold, yet entirely
free from mannerism. I was therefore pleased to
see in this show some studies, full of life and
action, of boys bathing in the sea or lagoon. Nor
must I omit to name his Leda, a picture vibrating
with light and life. L. Brosch.

Poets’ Country. Edited by Andrew Lang.
Illustrated by* Francis S. Walker. (London and
Edinburgh: T. C. & E. C. Jack). 21s. net.—
In choosing his collaborators for this new study of
the environment in which the great English poets
produced their masterpieces, the editor has shown
his usual tact and discretion, each of them being
specially fitted to deal with the branch of the subject
entrusted to him. Mr. Lang has himself dealt with
Scott and Shelley, whilst Mr. E. Hartley Coleridge
has treated his great namesake, as well as Words-
worth and Byron ; Professor T. Churton Collins,
Milton, Dryden, Goldsmith and the minor poets;
the Rev. W. T. Loftie, Chaucer, Goldsmith, Keats
and Spencer, and Mr. Michael Macmillan, Burns.
In spite of all that has already been written on the
poets, each of these true experts in criticism and
literary style has either something fresh to say or is
able to present long accepted truths in an original
manner, as when Mr. Lang remarks that to get at

“UNDER THE PERGOLA” BY ETTORE TITO