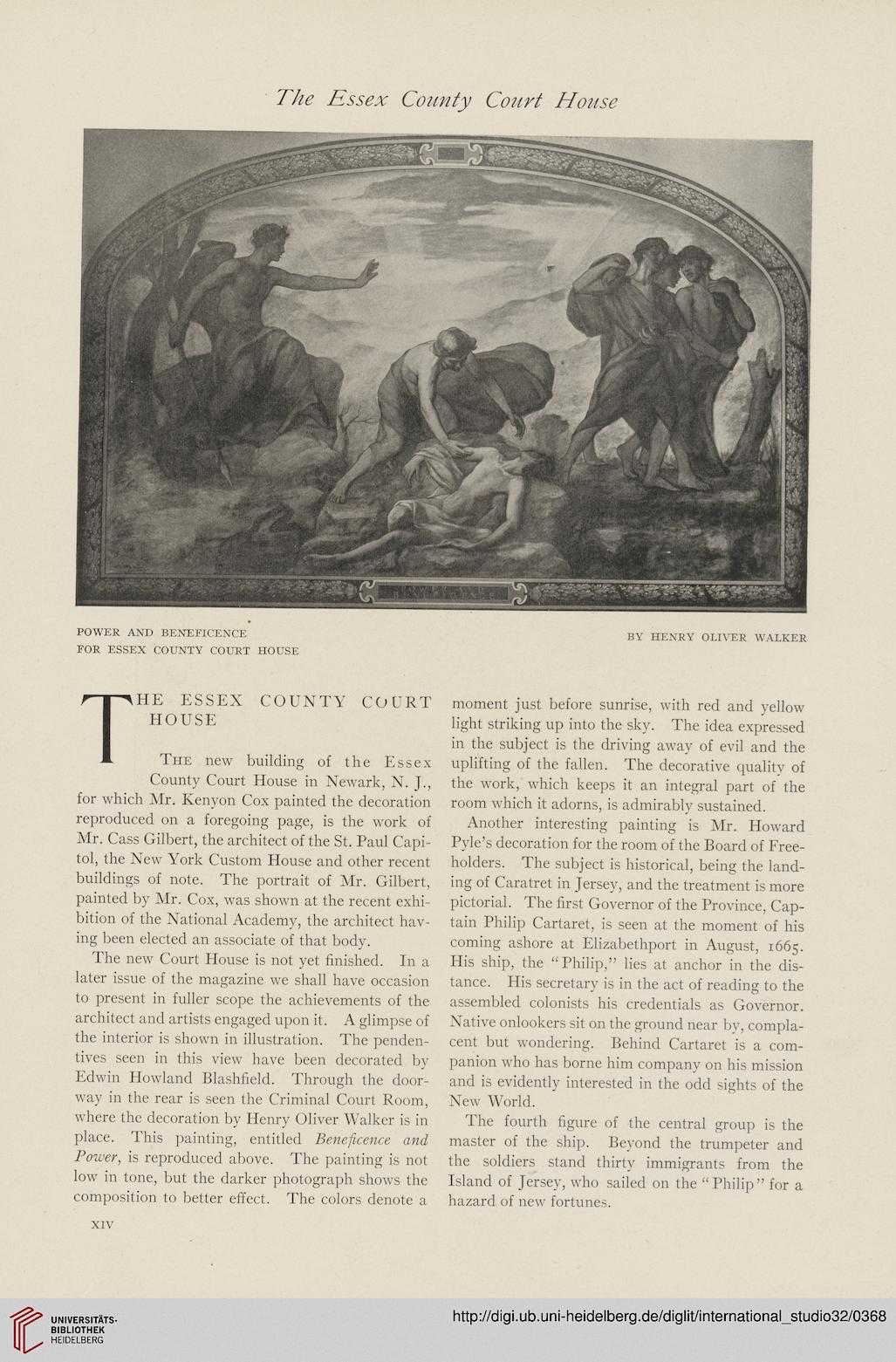 The new building of the Essex
County Court House in Newark, N. J.,
for which Mr. Kenyon Cox painted the decoration
reproduced on a foregoing page, is the work of
Mr. Cass Gilbert, the architect of the St. Paul Capi-
tol, the New York Custom House and other recent
buildings of note. The portrait of Mr. Gilbert,
painted by Mr. Cox, was shown at the recent exhi-
bition of the National Academy, the architect hav-
ing been elected an associate of that body.

The new Court House is not yet finished. In a
later issue of the magazine we shall have occasion
to present in fuller scope the achievements of the
architect and artists engaged upon it. A glimpse of
the interior is shown in illustration. The penden-
tives seen in this view have been decorated by
Edwin Howland Blashfield. Through the door-
way in the rear is seen the Criminal Court Room,
where the decoration by Henry Oliver Walker is in
place. This painting, entitled Beneficence and
Power, is reproduced above. The painting is not
low in tone, but the darker photograph shows the
composition to better effect. The colors denote a

moment just before sunrise, with red and yellow
light striking up into the sky. The idea expressed
in the subject is the driving away of evil and the
uplifting of the fallen. The decorative quality of
the work, which keeps it an integral part of the
room which it adorns, is admirably sustained.

Another interesting painting is Mr. Howard
Pyle’s decoration for the room of the Board of Free-
holders. The subject is historical, being the land-
ing of Caratret in Jersey, and the treatment is more
pictorial. The first Governor of the Province, Cap-
tain Philip Cartaret, is seen at the moment of his
coming ashore at Elizabethport in August, 1665.
His ship, the “Philip,” lies at anchor in the dis-
tance. His secretary is in the act of reading to the
assembled colonists his credentials as Governor.
Native onlookers sit on the ground near by, compla-
cent but wondering. Behind Cartaret is a com-
panion who has borne him company on his mission
and is evidently interested in the odd sights of the
New World.

The fourth figure of the central group is the
master of the ship. Beyond the trumpeter and
the soldiers stand thirty immigrants from the
Island of Jersey, who sailed on the “Philip” for a
hazard of new fortunes.