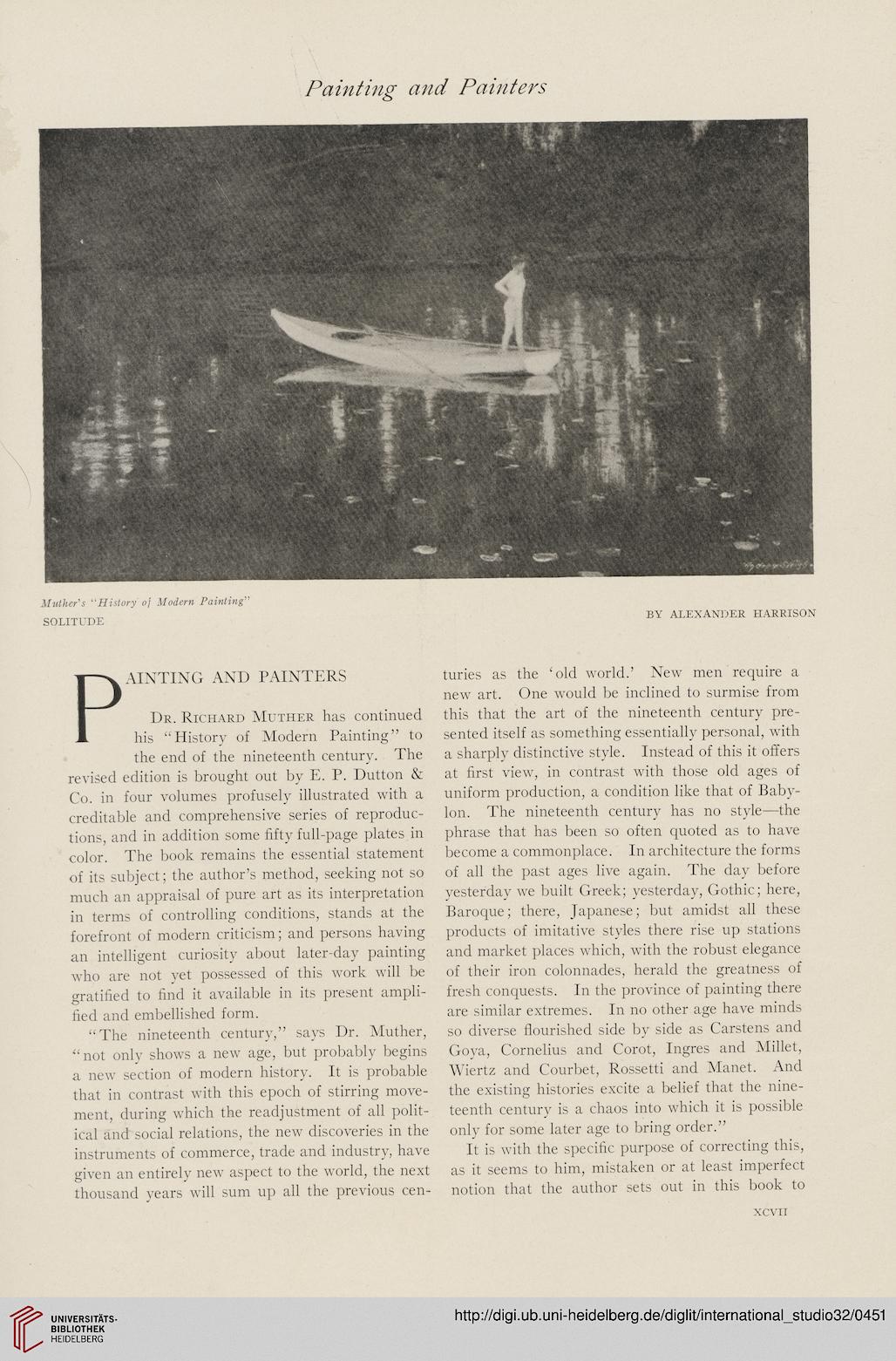 Dr. Richard Muther has continued
his “History of Modern Painting” to
the end of the nineteenth century. The
revised edition is brought out by E. P. Dutton &
Co. in four volumes profusely illustrated with a
creditable and comprehensive series of reproduc-
tions, and in addition some fifty full-page plates in
color. The book remains the essential statement
of its subject; the author’s method, seeking not so
much an appraisal of pure art as its interpretation
in terms of controlling conditions, stands at the
forefront of modern criticism; and persons having
an intelligent curiosity about later-day painting
who are not yet possessed of this work will be
gratified to find it available in its present ampli-
fied and embellished form.

“The nineteenth century,” says Dr. Muther,
“not only shows a new age, but probably begins
a new section of modern history. It is probable
that in contrast with this epoch of stirring move-
ment, during which the readjustment of all polit-
ical and social relations, the new discoveries in the
instruments of commerce, trade and industry, have
given an entirely new aspect to the world, the next
thousand years will sum up all the previous cen-

turies as the ‘old world.’ New men require a
new art. One would be inclined to surmise from
this that the art of the nineteenth century pre-
sented itself as something essentially personal, with
a sharply distinctive style. Instead of this it offers
at first view, in contrast with those old ages of
uniform production, a condition like that of Baby-
lon. The nineteenth century has no style—the
phrase that has been so often quoted as to have
become a commonplace. In architecture the forms
of all the past ages live again. The day before
yesterday we built Greek; yesterday, Gothic; here,
Baroque; there, Japanese; but amidst all these
products of imitative styles there rise up stations
and market places which, with the robust elegance
of their iron colonnades, herald the greatness of
fresh conquests. In the province of painting there
are similar extremes. In no other age have minds
so diverse flourished side by side as Carstens and
Goya, Cornelius and Corot, Ingres and Millet,
Wiertz and Courbet, Rossetti and Manet. And
the existing histories excite a belief that the nine-
teenth century is a chaos into which it is possible
only for some later age to bring order.”

It is with the specific purpose of correcting this,
as it seems to him, mistaken or at least imperfect
notion that the author sets out in this book to