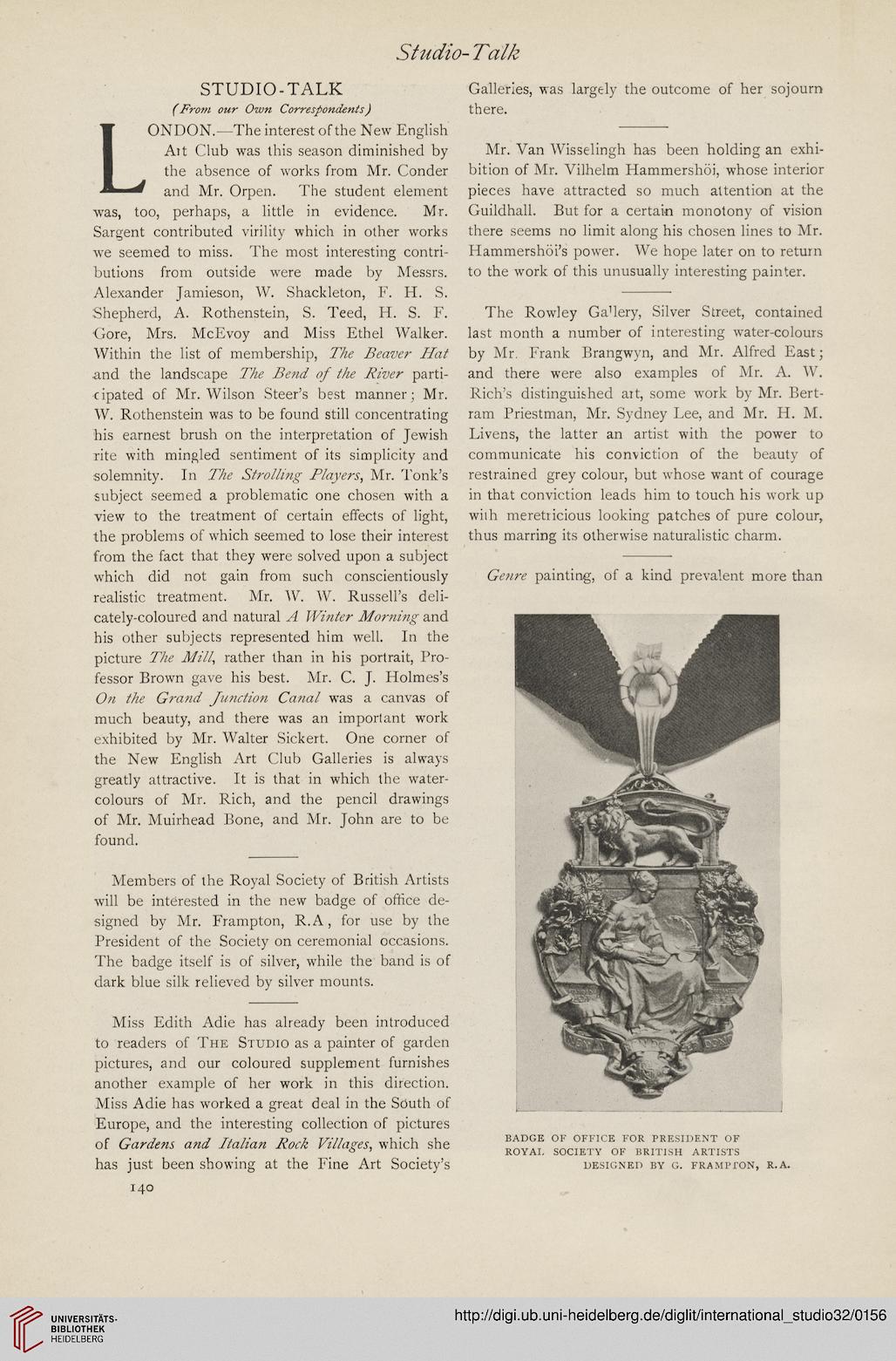 LONDON.—The interest of the New English
Ait Club was this season diminished by
the absence of works from Mr. Conder
and Mr. Orpen. The student element
was, too, perhaps, a little in evidence. Mr.
Sargent contributed virility which in other works
we seemed to miss. The most interesting contri-
butions from outside were made by Messrs.
Alexander Jamieson, W. Shackleton, F. H. S.
Shepherd, A. Rothenstein, S. Teed, H. S. F.
Gore, Mrs. McEvoy and Miss Ethel Walker.
Within the list of membership, The Beaver Hat
and the landscape The Bend of the River parti-
cipated of Mr. Wilson Steer’s best manner; Mr.
W. Rothenstein was to be found still concentrating
his earnest brush on the interpretation of Jewish
rite with mingled sentiment of its simplicity and
solemnity. In The Strolling Players, Mr. Tonk’s
subject seemed a problematic one chosen with a
view to the treatment of certain effects of light,
the problems of which seemed to lose their interest
from the fact that they were solved upon a subject
which did not gain from such conscientiously
realistic treatment. Mr. W. W. Russell’s deli-
cately-coloured and natural A Winter Morning and
his other subjects represented him well. In the
picture The Mill, rather than in his portrait, Pro-
fessor Brown gave his best. Mr. C. J. Holmes’s
On the Grand Junction Canal was a canvas of
much beauty, and there was an important work
exhibited by Mr. Walter Sickert. One corner of
the New English Art Club Galleries is always
greatly attractive. It is that in which the water-
colours of Mr. Rich, and the pencil drawings
of Mr. Muirhead Bone, and Mr. John are to be
found.

Members of the Royal Society of British Artists
will be interested in the new badge of office de-
signed by Mr. Frampton, R.A, for use by the
President of the Society on ceremonial occasions.
The badge itself is of silver, while the band is of
dark blue silk relieved by silver mounts.

Miss Edith Adie has already been introduced
to readers of The Studio as a painter of garden
pictures, and our coloured supplement furnishes
another example of her work in this direction.
Miss Adie has worked a great deal in the South of
Europe, and the interesting collection of pictures
of Gardens and Italian Rock Villages, which she
has just been showing at the Fine Art Society’s

Galleries, was largely the outcome of her sojourn
there.

Mr. Van Wisselingh has been holding an exhi-
bition of Mr. Vilhelm Hammershoi, whose interior
pieces have attracted so much attention at the
Guildhall. But for a certain monotony of vision
there seems no limit along his chosen lines to Mr.
Hammershoi’s power. We hope later on to return
to the work of this unusually interesting painter.

The Rowley Ga'lery, Silver Street, contained
last month a number of interesting water-colours
by Mr. Frank Brangwyn, and Mr. Alfred East;
and there were also examples of Mr. A. W.
Rich’s distinguished ait, some work by Mr. Bert-
ram Priestman, Mr. Sydney Lee, and Mr. H. M.
Livens, the latter an artist with the power to
communicate his conviction of the beauty of
restrained grey colour, but whose want of courage
in that conviction leads him to touch his work up
wiih meretricious looking patches of pure colour,
thus marring its otherwise naturalistic charm.

Getire painting, of a kind prevalent more than

BADGE OF OFFICE FOR PRESIDENT OF
ROYAI. SOCIETY OF BRITISH ARTISTS