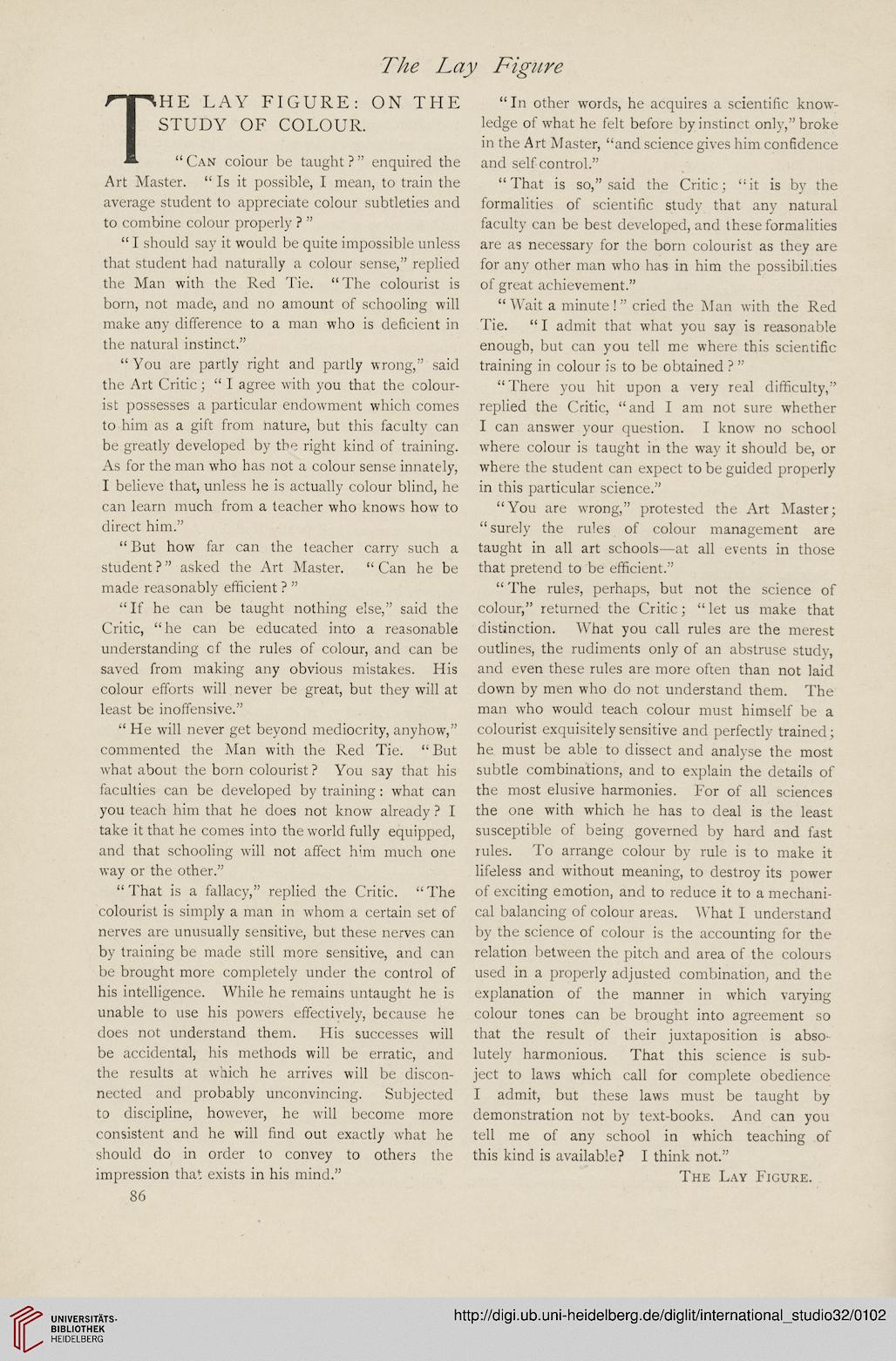 THE LAY FIGURE: ON THE
STUDY OF COLOUR.

“ Can colour be taught ? ” enquired the
Art Master. “ Is it possible, I mean, to train the
average student to appreciate colour subtleties and
to combine colour properly ? ”

“ I should say it would be quite impossible unless
that student had naturally a colour sense,” replied
the Man with the Red Tie. “The colourist is
born, not made, and no amount of schooling will
make any difference to a man who is deficient in
the natural instinct.”

“ You are partly right and partly wrong,” said
the Art Critic; “ I agree with you that the colour-
ist possesses a particular endowment which comes
to him as a gift from nature, but this faculty can
be greatly developed by the right kind of training.
As for the man who has not a colour sense innately,
I believe that, unless he is actually colour blind, he
can learn much from a teacher who knows how to
direct him.”

“ But how far can the teacher carry such a
student ? ” asked the Art Master. “ Can he be
made reasonably efficient ? ”

“If he can be taught nothing else,” said the
Critic, “ he can be educated into a reasonable
understanding of the rules of colour, and can be
saved from making any obvious mistakes. His
colour efforts will never be great, but they will at
least be inoffensive.”

“ He will never get beyond mediocrity, anyhow,”
commented the Man with the Red Tie. “But
what about the born colourist? You say that his
faculties can be developed by training: what can
you teach him that he does not know already ? I
take it that he comes into the world fully equipped,
and that schooling will not affect him much one
way or the other.”

“ That is a fallacy,” replied the Critic. “ The
colourist is simply a man in whom a certain set of
nerves are unusually sensitive, but these nerves can
by training be made still more sensitive, and can
be brought more completely under the control of
his intelligence. While he remains untaught he is
unable to use his powers effectively, because he
does not understand them. His successes will
be accidental, his methods will be erratic, and
the results at which he arrives will be discon-
nected and probably unconvincing. Subjected
to discipline, however, he will become more
consistent and he will find out exactly what he
should do in order to convey to others the
impression that exists in his mind.”

“ In other words, he acquires a scientific know-
ledge of what he felt before by instinct only,” broke
in the Art Master, “and science gives him confidence
and self control.”

“That is so,” said the Critic; “it is by the
formalities of scientific study that any natural
faculty can be best developed, and these formalities
are as necessary for the born colourist as they are
for any other man who has in him the possibilities
of great achievement.”

“ Wait a minute! ” cried the Man with the Red
Tie. “ I admit that what you say is reasonable
enough, but can you tell me where this scientific
training in colour is to be obtained ? ”

“There you hit upon a very real difficulty,”
replied the Critic, “and I am not sure whether
I can answer your question. I know no school
where colour is taught in the way it should be, or
where the student can expect to be guided properly
in this particular science.”

“You are wrong,” protested the Art Master;
“surely the rules of colour management are
taught in all art schools—at all events in those
that pretend to be efficient.”

“ The rules, perhaps, but not the science of
colour,” returned the Critic; “ let us make that
distinction. What you call rules are the merest
outlines, the rudiments only of an abstruse study,
and even these rules are more often than not laid
down by men who do not understand them. The
man who would teach colour must himself be a
colourist exquisitely sensitive and perfectly trained;
he must be able to dissect and analyse the most
subtle combinations, and to explain the details of
the most elusive harmonies. For of all sciences
the one with which he has to deal is the least
susceptible of being governed by hard and fast
rules. To arrange colour by rule is to make it
lifeless and without meaning, to destroy its power
of exciting emotion, and to reduce it to a mechani-
cal balancing of colour areas. What I understand
by the science of colour is the accounting for the
relation between the pitch and area of the colours
used in a properly adjusted combination, and the
explanation of the manner in which varying
colour tones can be brought into agreement so
that the result of their juxtaposition is abso-
lutely harmonious. That this science is sub-
ject to laws which call for complete obedience
I admit, but these laws must be taught by
demonstration not by text-books. And can you
tell me of any school in which teaching of
this kind is available? I think not.”