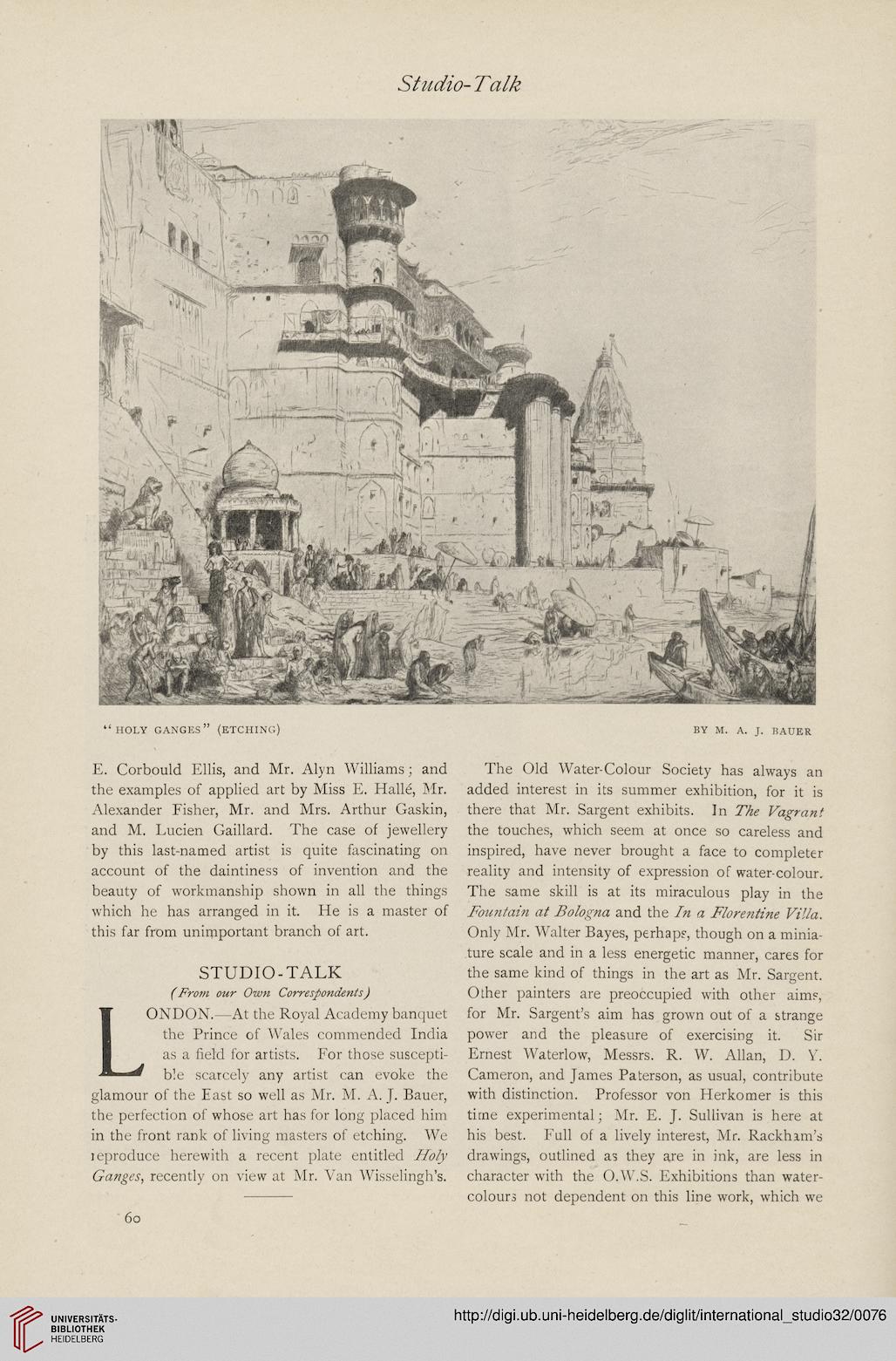 E. Corbould Ellis, and Mr. Alyn Williams; and
the examples of applied art by Miss E. Halid, Mr.
Alexander Fisher, Mr. and Mrs. Arthur Gaskin,
and M. Lucien Gaillard. The case of jewellery
by this last-named artist is quite fascinating on
account of the daintiness of invention and the
beauty of workmanship shown in all the things
which he has arranged in it. He is a master of
this far from unimportant branch of art.

LONDON.—At the Royal Academy banquet
the Prince of Wales commended India
as a field for artists. For those suscepti-
ble scarcely any artist can evoke the
glamour of the East so well as Mr. M. A. J. Bauer,
the perfection of whose art has for long placed him
in the front rank of living masters of etching. We
reproduce herewith a recent plate entitled Holy
Ganges, recently on view at Mr. Van Wisselingh’s.

The Old Water-Colour Society has always an
added interest in its summer exhibition, for it is
there that Mr. Sargent exhibits. In The Vagrant
the touches, which seem at once so careless and
inspired, have never brought a face to completer
reality and intensity of expression of water-colour.
The same skill is at its miraculous play in the
Fountain at Bologna and the In a Florentine Villa.
Only Mr. Walter Bayes, perhaps, though on a minia-
ture scale and in a less energetic manner, cares for
the same kind of things in the art as Mr. Sargent.
Other painters are preoccupied with other aims,
for Mr. Sargent’s aim has grown out of a strange
power and the pleasure of exercising it. Sir
Ernest Waterlow, Messrs. R. W. Allan, D. Y.
Cameron, and James Paterson, as usual, contribute
with distinction. Professor von Herkomer is this
time experimental; Mr. E. J. Sullivan is here at
his best. Full of a lively interest, Mr. Rackham’s
drawings, outlined as they are in ink, are less in
character with the O.W.S. Exhibitions than water-
colours not dependent on this line work, which we