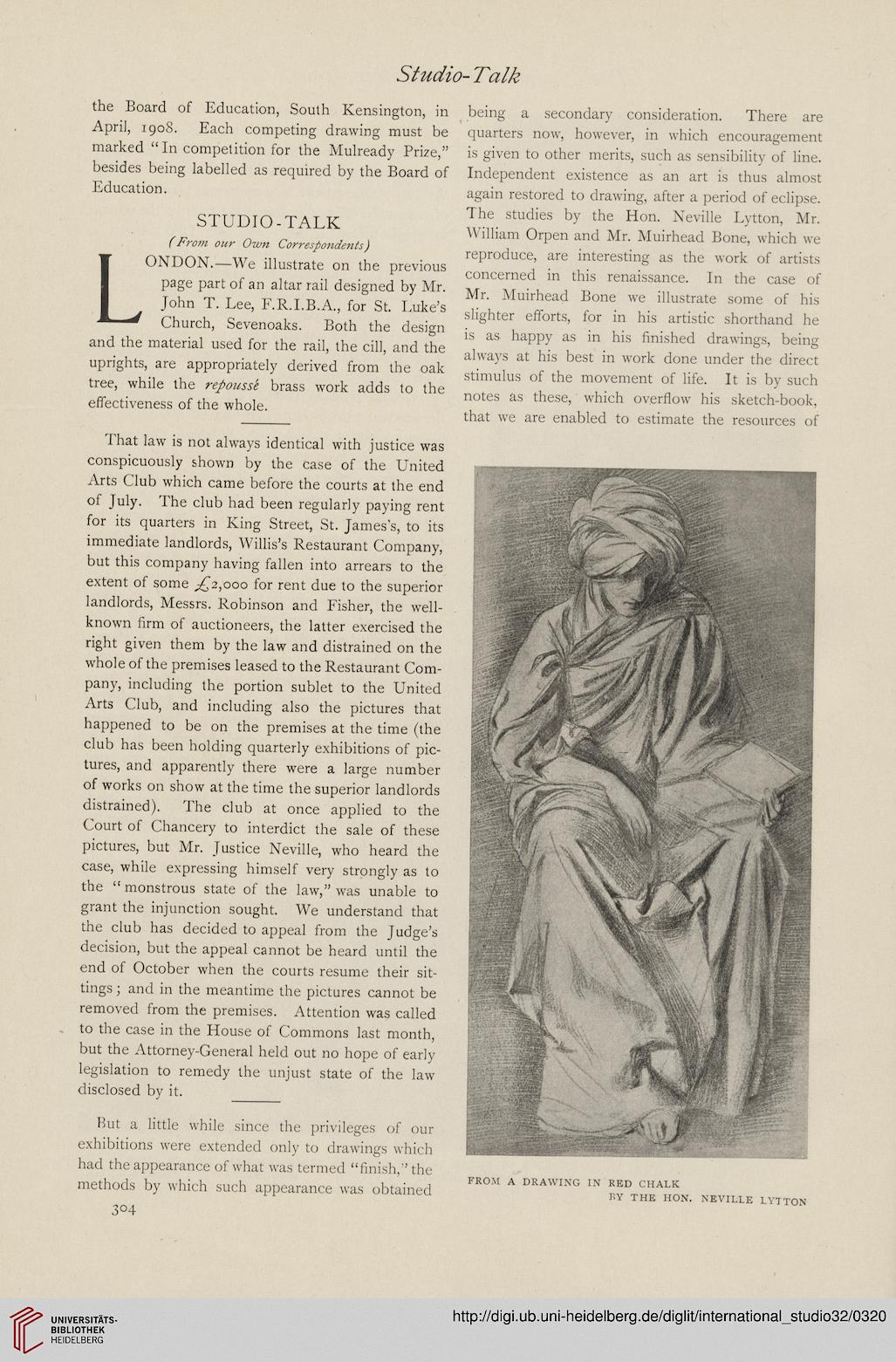 the Board of Education, South Kensington, in
April, 1908. Each competing drawing must be
marked “ In competition for the Mulready Prize,”
besides being labelled as required by the Board of
Education.

LONDON.—We illustrate on the previous
page part of an altar rail designed by Mr.
John T. Lee, F.R.I.B.A., for St. Luke’s
Church, Sevenoaks. Both the design
and the material used for the rail, the cill, and the
uprights, are appropriately derived from the oak
tree, while the repouss'e brass work adds to the
effectiveness of the whole.

That law is not always identical with justice was
conspicuously shown by the case of the United
Arts Club which came before the courts at the end
of July. The club had been regularly paying rent
for its quarters in King Street, St. James’s, to its
immediate landlords, Willis’s Restaurant Company,
but this company having fallen into arrears to the
extent of some J~2,ooo for rent due to the superior
landlords, Messrs. Robinson and Fisher, the well-
known firm of auctioneers, the latter exercised the
right given them by the law and distrained on the
whole of the premises leased to the Restaurant Com-
pany, including the portion sublet to the United
Arts Club, and including also the pictures that
happened to be on the premises at the time (the
club has been holding quarterly exhibitions of pic-
tures, and apparently there were a large number
of works on show at the time the superior landlords
distrained). The club at once applied to the
Court of Chancery to interdict the sale of these
pictures, but Mr. Justice Neville, who heard the
case, while expressing himself very strongly as to
the “ monstrous state of the law,” was unable to
grant the injunction sought. We understand that
the club has decided to appeal from the Judge’s
decision, but the appeal cannot be heard until the
end of October when the courts resume their sit-
tings ; and in the meantime the pictures cannot be
removed from the premises. Attention was called
to the case in the House of Commons last month,
but the Attorney-General held out no hope of early
legislation to remedy the unjust state of the law
disclosed by it. _

But a little while since the privileges of our
exhibitions were extended only to drawings which
had the appearance of what was termed “finish,” the
methods by which such appearance was obtained
3°4

being a secondary consideration. There are
quarters now, however, in which encouragement
is given to other merits, such as sensibility of line.
Independent existence as an art is thus almost
again restored to drawing, after a period of eclipse.
The studies by the Hon. Neville Lytton, Mr.
William Orpen and Mr. Muirhead Bone, which we
reproduce, are interesting as the work of artists
concerned in this renaissance. In the case of
Mr. Muirhead Bone we illustrate some of his
slighter efforts, for in his artistic shorthand he
is as happy as in his finished drawings, being
always at his best in work done under the direct
stimulus of the movement of life. It is by such
notes as these, which overflow his sketch-book,
that we are enabled to estimate the resources of

FROM A DRAWING IN RED CHALK