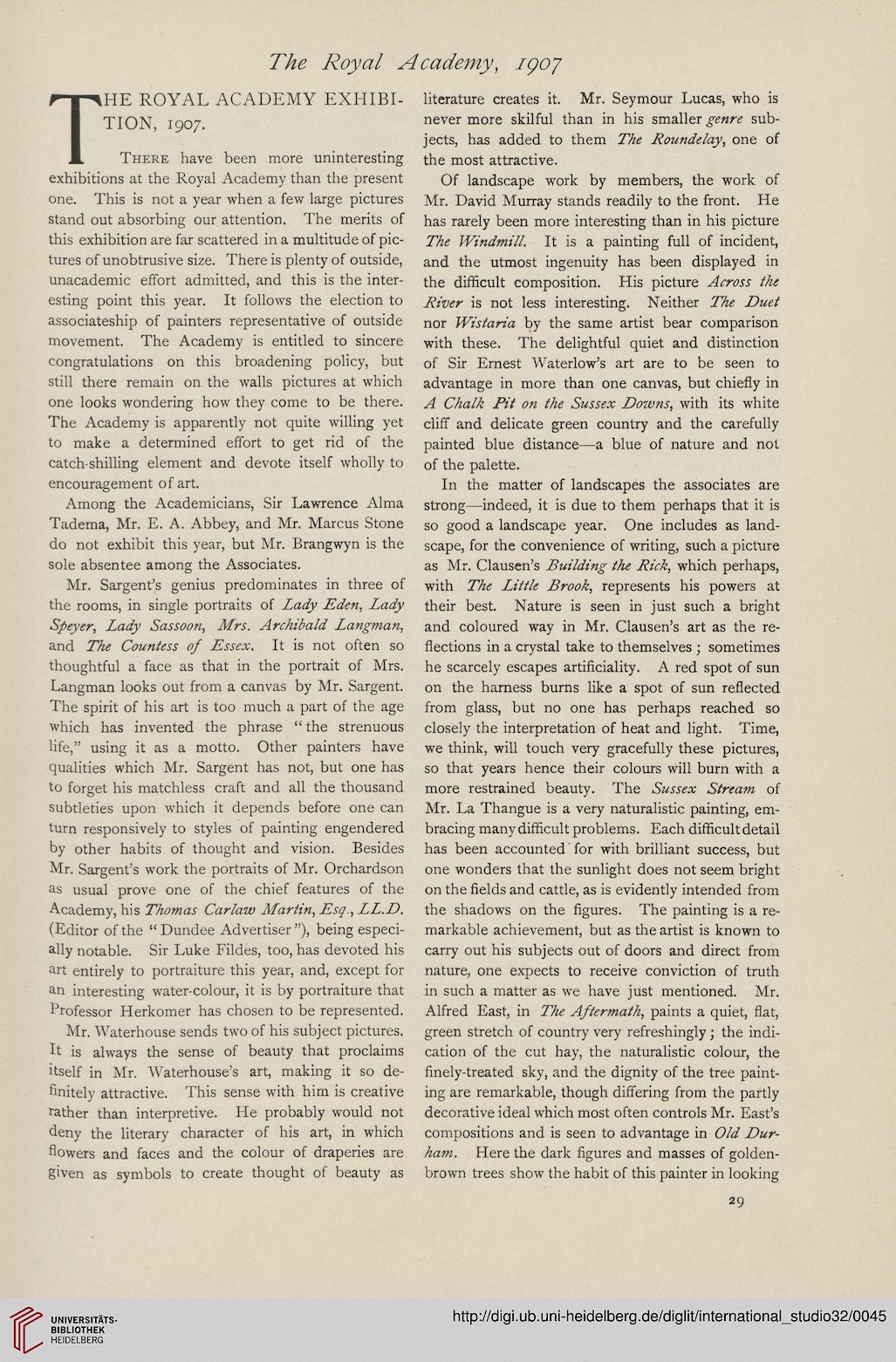 There have been more uninteresting
exhibitions at the Royal Academy than the present
one. This is not a year when a few large pictures
stand out absorbing our attention. The merits of
this exhibition are far scattered in a multitude of pic-
tures of unobtrusive size. There is plenty of outside,
unacademic effort admitted, and this is the inter-
esting point this year. It follows the election to
associateship of painters representative of outside
movement. The Academy is entitled to sincere
congratulations on this broadening policy, but
still there remain on the walls pictures at which
one looks wondering how they come to be there.
The Academy is apparently not quite willing yet
to make a determined effort to get rid of the
catch-shilling element and devote itself wholly to
encouragement of art.

Among the Academicians, Sir Lawrence Alma
Tadema, Mr. E. A. Abbey, and Mr. Marcus Stone
do not exhibit this year, but Mr. Brangwyn is the
sole absentee among the Associates.

Mr. Sargent’s genius predominates in three of
the rooms, in single portraits of Lady Eden, Lady
Speyer, Lady Sassoon, Mrs. Archibald Langman,
and The Countess of Essex. It is not often so
thoughtful a face as that in the portrait of Mrs.
Langman looks out from a canvas by Mr. Sargent.
The spirit of his art is too much a part of the age
which has invented the phrase “ the strenuous
life,” using it as a motto. Other painters have
qualities which Mr. Sargent has not, but one has
to forget his matchless craft and all the thousand
subtleties upon which it depends before one can
turn responsively to styles of painting engendered
by other habits of thought and vision. Besides
Mr. Sargent’s work the portraits of Mr. Orchardson
as usual prove one of the chief features of the
Academy, his Thomas Carlaw Martin, Esq., LL.D.
(Editor of the “ Dundee Advertiser ”), being especi-
ally notable. Sir Luke Fildes, too, has devoted his
art entirely to portraiture this year, and, except for
an interesting water-colour, it is by portraiture that
Professor Herkomer has chosen to be represented.

Mr. Waterhouse sends two of his subject pictures.
It is always the sense of beauty that proclaims
itself in Mr. Waterhouse’s art, making it so de-
finitely attractive. This sense with him is creative
rather than interpretive. He probably would not
deny the literary character of his art, in which
flowers and faces and the colour of draperies are
given as symbols to create thought of beauty as

literature creates it. Mr. Seymour Lucas, who is
never more skilful than in his smaller genre sub-
jects, has added to them The Roundelay, one of
the most attractive.

Of landscape work by members, the work of
Mr. David Murray stands readily to the front. He
has rarely been more interesting than in his picture
The Windmill. It is a painting full of incident,
and the utmost ingenuity has been displayed in
the difficult composition. His picture Across the
River is not less interesting. Neither The Duet
nor Wistaria by the same artist bear comparison
with these. The delightful quiet and distinction
of Sir Ernest Waterlow’s art are to be seen to
advantage in more than one canvas, but chiefly in
A Chalk Pit on the Sussex Downs, with its white
cliff and delicate green country and the carefully
painted blue distance—a blue of nature and not
of the palette.

In the matter of landscapes the associates are
strong—indeed, it is due to them perhaps that it is
so good a landscape year. One includes as land-
scape, for the convenience of writing, such a picture
as Mr. Clausen’s Building the Rick, which perhaps,
with The Little Brook, represents his powers at
their best. Nature is seen in just such a bright
and coloured way in Mr. Clausen’s art as the re-
flections in a crystal take to themselves ; sometimes
he scarcely escapes artificiality. A red spot of sun
on the harness burns like a spot of sun reflected
from glass, but no one has perhaps reached so
closely the interpretation of heat and light. Time,
we think, will touch very gracefully these pictures,
so that years hence their colours will burn with a
more restrained beauty. The Sussex Stream of
Mr. La Thangue is a very naturalistic painting, em-
bracing many difficult problems. Each difficult detail
has been accounted for with brilliant success, but
one wonders that the sunlight does not seem bright
on the fields and cattle, as is evidently intended from
the shadows on the figures. The painting is a re-
markable achievement, but as the artist is known to
carry out his subjects out of doors and direct from
nature, one expects to receive conviction of truth
in such a matter as we have just mentioned. Mr.
Alfred East, in The Aftermath, paints a quiet, flat,
green stretch of country very refreshingly; the indi-
cation of the cut hay, the naturalistic colour, the
finely-treated sky, and the dignity of the tree paint-
ing are remarkable, though differing from the partly
decorative ideal which most often controls Mr. East’s
compositions and is seen to advantage in Old Dur-
ham. Here the dark figures and masses of golden-
brown trees show the habit of this painter in looking