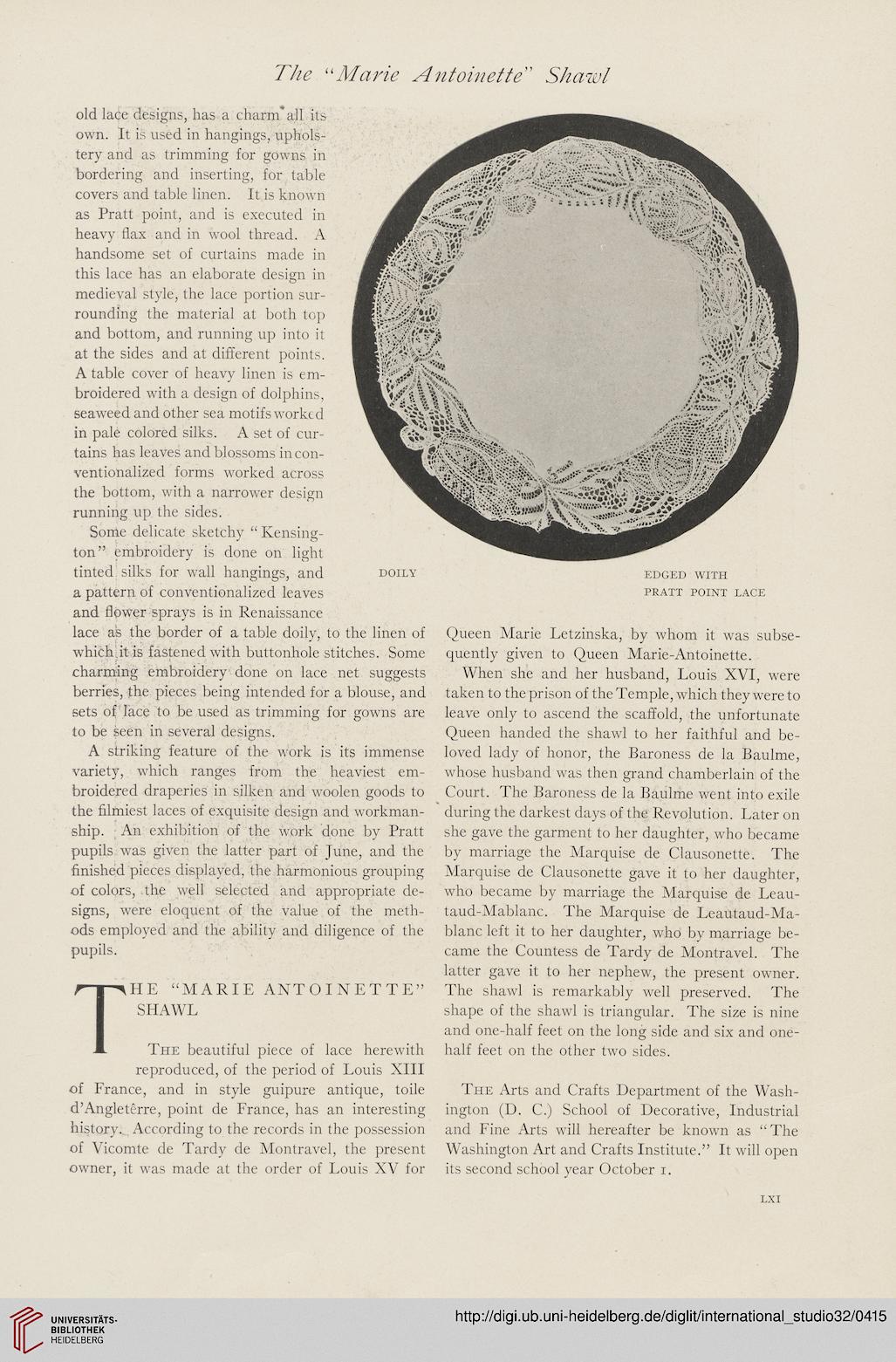 Queen Marie Letzinska, by whom it was subse-
quently given to Queen Marie-Antoinette.

When she and her husband, Louis XVI, were
taken to the prison of the Temple, which they were to
leave only to ascend the scaffold, the unfortunate
Queen handed the shawl to her faithful and be-
loved lady of honor, the Baroness de la Baulme,
whose husband was then grand chamberlain of the
Court. The Baroness de la Baulme went into exile
during the darkest days of the Revolution. Later on
she gave the garment to her daughter, who became
by marriage the Marquise de Clausonette. The
Marquise de Clausonette gave it to her daughter,
who became by marriage the Marquise de Leau-
taud-Mablanc. The Marquise de Leautaud-Ma-
blanc left it to her daughter, who by marriage be-
came the Countess de Tardy de Montravel. The
latter gave it to her nephew, the present owner.
The shawl is remarkably well preserved. The
shape of the shawl is triangular. The size is nine
and one-half feet on the long side and six and one-
half feet on the other two sides.

The Arts and Crafts Department of the Wash-
ington (D. C.) School of Decorative, Industrial
and Fine Arts will hereafter be known as “The
Washington Art and Crafts Institute.” It will open
its second school year October i.

The beautiful piece of lace herewith
reproduced, of the period of Louis XIII
of France, and in style guipure antique, toile
d’Angleterre, point de France, has an interesting
history. According to the records in the possession
of Vicomte de Tardy de Montravel, the present
owner, it was made at the order of Louis XV for

old labe designs, has a charm* all its
own. It is used in hangings, uphols-
tery and as trimming for gowns in
bordering and inserting, for table
covers and table linen. It is known
as Pratt point, and is executed in
heavy flax and in wool thread. A
handsome set of curtains made in
this lace has an elaborate design in
medieval style, the lace portion sur-
rounding the material at both top
and bottom, and running up into it
at the sides and at different points.

A table cover of heavy linen is em-
broidered with a design of dolphins,
seaweed and other sea motifs worked
in pale colored silks. A set of cur-
tains has leaves and blossoms in con-
ventionalized forms worked across
the bottom, with a narrower design
running up the sides.

a pattern of conventionalized leaves
and flower sprays is in Renaissance
lace as the border of a table doily, to the linen of
which it is fastened with buttonhole stitches. Some
charming embroidery done on lace net suggests
berries, the pieces being intended for a blouse, and
sets of lace to be used as trimming for gowns are
to be seen in several designs.

A striking feature of the work is its immense
variety, which ranges from the heaviest em-
broidered draperies in silken and woolen goods to
the filmiest laces of exquisite design and workman-
ship. An exhibition of the work done by Pratt
pupils was given the latter part of June, and the
finished pieces displayed, the harmonious grouping
of colors, the well selected and appropriate de-
signs, were eloquent of the value of the meth-
ods employed and the ability and diligence of the
pupils.