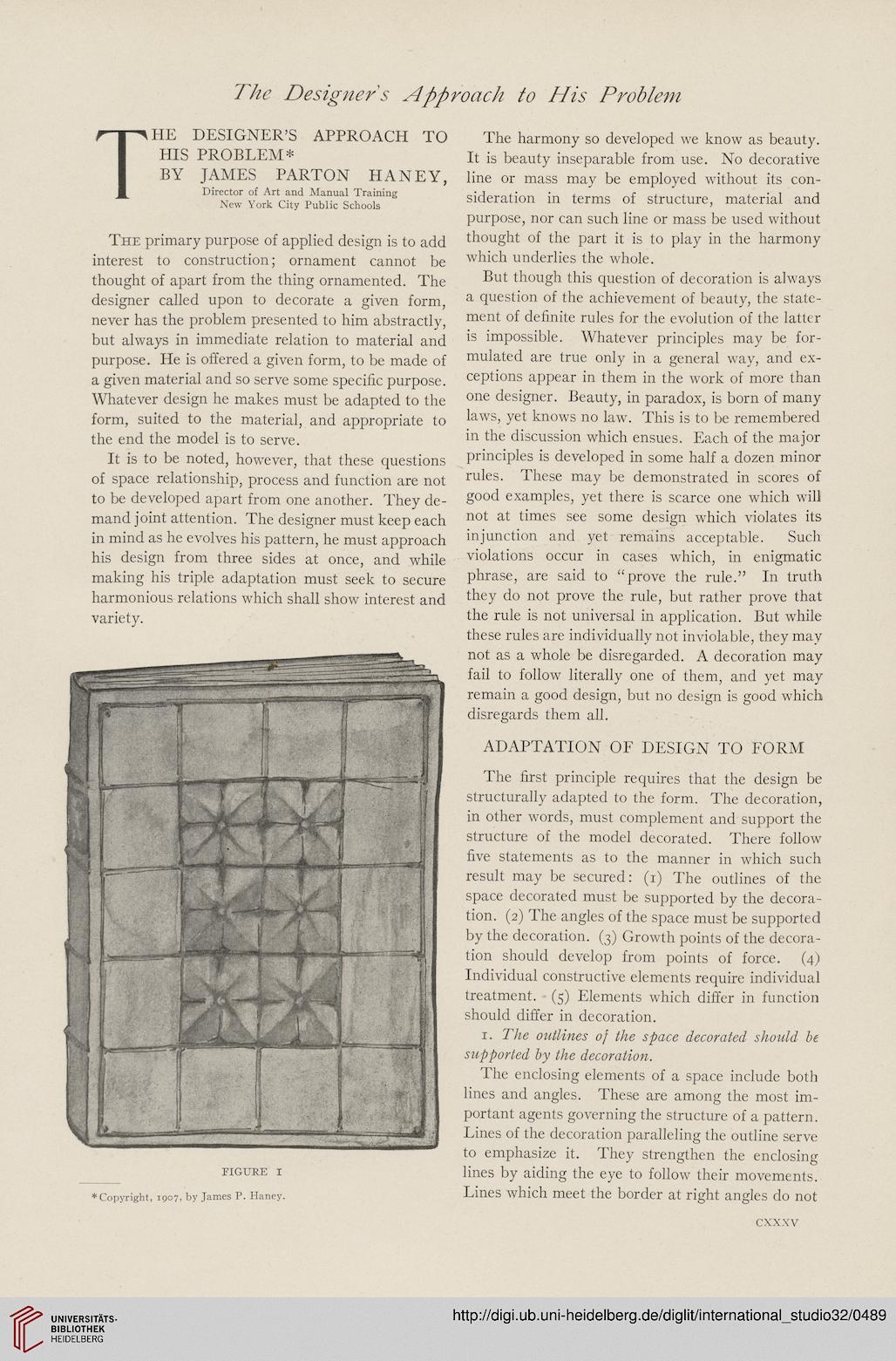 Information about OCR text
The Designer s Approach to His Problem

HE DESIGNER’S APPROACH TO
HIS PROBLEM*

The primary purpose of applied design is to add
interest to construction; ornament cannot be
thought of apart from the thing ornamented. The
designer called upon to decorate a given form,
never has the problem presented to him abstractly,
but always in immediate relation to material and
purpose. He is offered a given form, to be made of
a given material and so serve some specific purpose.
Whatever design he makes must be adapted to the
form, suited to the material, and appropriate to
the end the model is to serve.

It is to be noted, however, that these questions
of space relationship, process and function are not
to be developed apart from one another. They de-
mand joint attention. The designer must keep each
in mind as he evolves his pattern, he must approach
his design from three sides at once, and while
making his triple adaptation must seek to secure
harmonious relations which shall show interest and
variety.

The harmony so developed we know as beauty.
It is beauty inseparable from use. No decorative
line or mass may be employed without its con-
sideration in terms of structure, material and
purpose, nor can such line or mass be used without
thought of the part it is to play in the harmony
which underlies the whole.

But though this question of decoration is always
a question of the achievement of beauty, the state-
ment of definite rules for the evolution of the latter
is impossible. Whatever principles may be for-
mulated are true only in a general way, and ex-
ceptions appear in them in the work of more than
one designer. Beauty, in paradox, is born of many
laws, yet knows no law. This is to be remembered
in the discussion which ensues. Each of the major
principles is developed in some half a dozen minor
rules. These may be demonstrated in scores of
good examples, yet there is scarce one which will
not at times see some design which violates its
injunction and yet remains acceptable. Such
violations occur in cases which, in enigmatic
phrase, are said to “prove the rule.” In truth
they do not prove the rule, but rather prove that
the rule is not universal in application. But while
these rules are individually not inviolable, they may
not as a whole be disregarded. A decoration may
fail to follow literally one of them, and yet may
remain a good design, but no design is good which
disregards them all.

ADAPTATION OF DESIGN TO FORM

The first principle requires that the design be
structurally adapted to the form. The decoration,
in other words, must complement and support the
structure of the model decorated. There follow
five statements as to the manner in which such
result may be secured: (i) The outlines of the
space decorated must be supported by the decora-
tion. (2) The angles of the space must be supported
by the decoration. (3) Growth points of the decora-
tion should develop from points of force. (4)
Individual constructive elements require individual
treatment. (5) Elements which differ in function
should differ in decoration.

1. The outlines of the space decorated should be
supported by the decoration.

The enclosing elements of a space include both
lines and angles. These are among the most im-
portant agents governing the structure of a pattern.
Lines of the decoration paralleling the outline serve
to emphasize it. They strengthen the enclosing
lines by aiding the eye to follow their movements.
Lines which meet the border at right angles do not