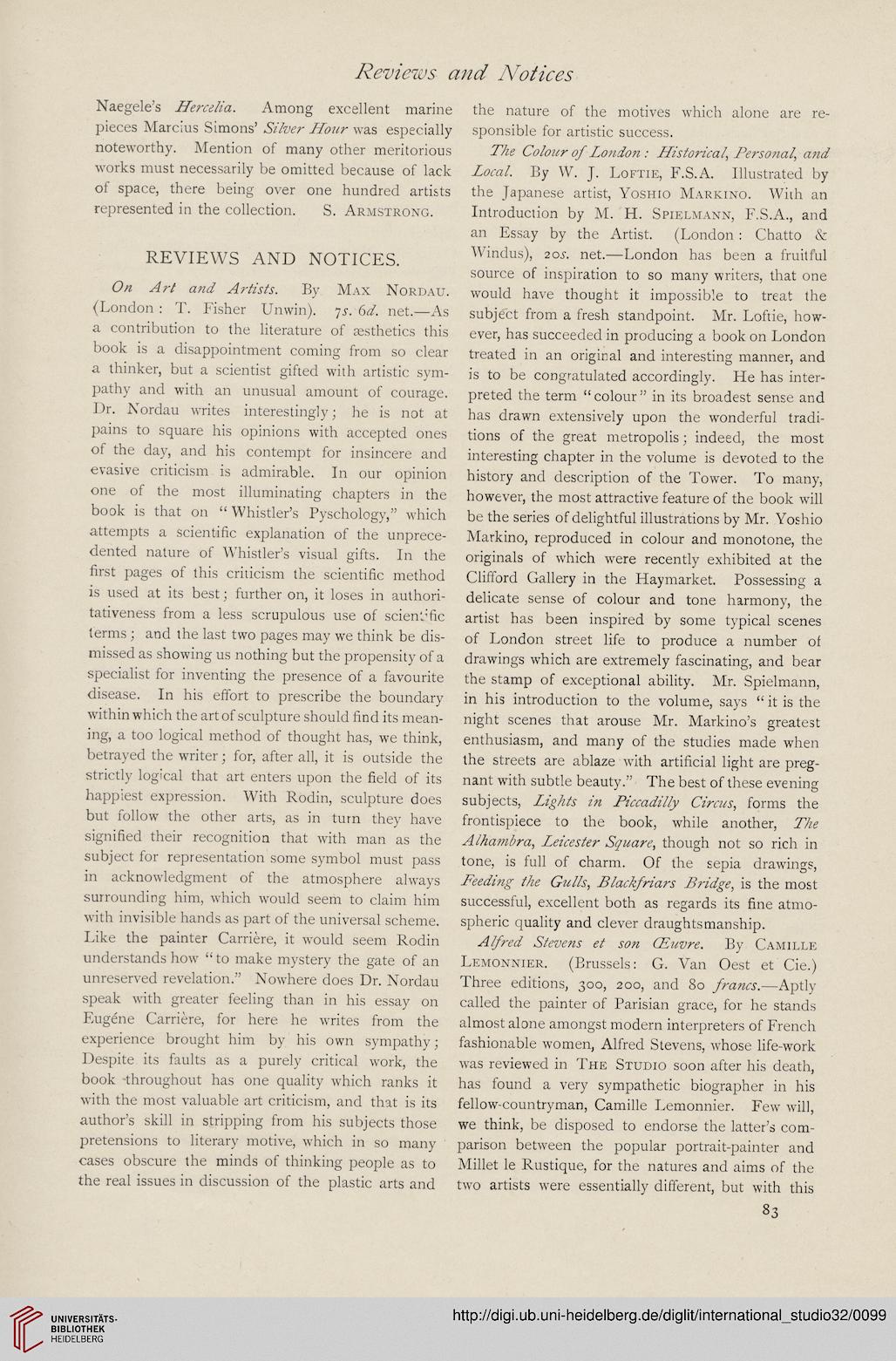 Naegele’s Hercelia. Among excellent marine
pieces Marcius Simons’ Silver Hour was especially
noteworthy. Mention of many other meritorious
works must necessarily be omitted because of lack
of space, there being over one hundred artists
represented in the collection. S. Armstrong.

On Art and Artists. By Max Nordau.
(London : T. Fisher Unwin). 7s. 6d. net.—As
a contribution to the literature of aesthetics this
book is a disappointment coming from so clear
a thinker, but a scientist gifted with artistic sym-
pathy and with an unusual amount of courage.
Dr. Nordau writes interestingly; he is not at
pains to square his opinions with accepted ones
of the day, and his contempt for insincere and
evasive criticism is admirable. In our opinion
one of the most illuminating chapters in the
book is that on “ Whistler’s Pyschology,” which
attempts a scientific explanation of the unprece-
dented nature of Whistler’s visual gifts. In the
first pages of this criticism the scientific method
is used at its best; further on, it loses in authori-
tativeness from a less scrupulous use of scientific
terms ; and the last two pages may we think be dis-
missed as showing us nothing but the propensity of a
specialist for inventing the presence of a favourite
disease. In his effort to prescribe the boundary
within which the art of sculpture should find its mean-
ing, a too logical method of thought has, we think,
betrayed the writer; for, after all, it is outside the
strictly logical that art enters upon the field of its
happiest expression. With Rodin, sculpture does
but follow the other arts, as in turn they have
signified their recognition that with man as the
subject for representation some symbol must pass
in acknowledgment of the atmosphere always
surrounding him, which would seem to claim him
with invisible hands as part of the universal scheme.
Like the painter Carriere, it would seem Rodin
understands how “ to make mystery the gate of an
unreserved revelation.” Nowhere does Dr. Nordau
speak with greater feeling than in his essay on
Eugene Carriere, for here he writes from the
experience brought him by his own sympathy;
Despite its faults as a purely critical work, the
book throughout has one quality which ranks it
with the most valuable art criticism, and that is its
author’s skill in stripping from his subjects those
pretensions to literary motive, which in so many
cases obscure the minds of thinking people as to
the real issues in discussion of the plastic arts and

the nature of the motives which alone are re-
sponsible for artistic success.

The Colour of London : Historical, Personal\ and
Local. By W. J. Loftie, F.S.A. Illustrated by
the Japanese artist, Yoshio Markino. With an
Introduction by M. H. Spielmann, F.S.A., and
an Essay by the Artist. (London: Chatto &
Windus), 20s. net.—London has been a fruitful
source of inspiration to so many writers, that one
would have thought it impossible to treat the
subject from a fresh standpoint. Mr. Loftie, how-
ever, has succeeded in producing a book on London
treated in an original and interesting manner, and
is to be congratulated accordingly. He has inter-
preted the term “colour” in its broadest sense and
has drawn extensively upon the wonderful tradi-
tions of the great metropolis; indeed, the most
interesting chapter in the volume is devoted to the
history and description of the Tower. To many,
however, the most attractive feature of the book will
be the series of delightful illustrations by Mr. Yoshio
Markino, reproduced in colour and monotone, the
originals of which were recently exhibited at the
Clifford Gallery in the Haymarket. Possessing a
delicate sense of colour and tone harmony, the
artist has been inspired by some typical scenes
of London street life to produce a number of
drawings which are extremely fascinating, and bear
the stamp of exceptional ability. Mr. Spielmann,
in his introduction to the volume, says “ it is the
night scenes that arouse Mr. Markino’s greatest
enthusiasm, and many of the studies made when
the streets are ablaze with artificial light are preg-
nant with subtle beauty.” The best of these evening
subjects, Lights in Piccadilly Circus, forms the
frontispiece to the book, while another, The
Alhambra, Leicester Square, though not so rich in
tone, is full of charm. Of the sepia drawings,
Feeding the Gulls, Blackfriars Bridge, is the most
successful, excellent both as regards its fine atmo-
spheric quality and clever draughtsmanship.

Alfred Stevens et son CEuvre. By Camille
Lemonnier. (Brussels: G. Van Oest et Cie.)
Three editions, 300, 200, and 80 francs.—Aptly
called the painter of Parisian grace, for he stands
almost alone amongst modern interpreters of French
fashionable women, Alfred Stevens, whose life-work
was reviewed in The Studio soon after his death,
has found a very sympathetic biographer in his
fellow-countryman, Camille Lemonnier. Few will,
we think, be disposed to endorse the latter’s com-
parison between the popular portrait-painter and
Millet le Rustique, for the natures and aims of the
two artists were essentially different, but with this