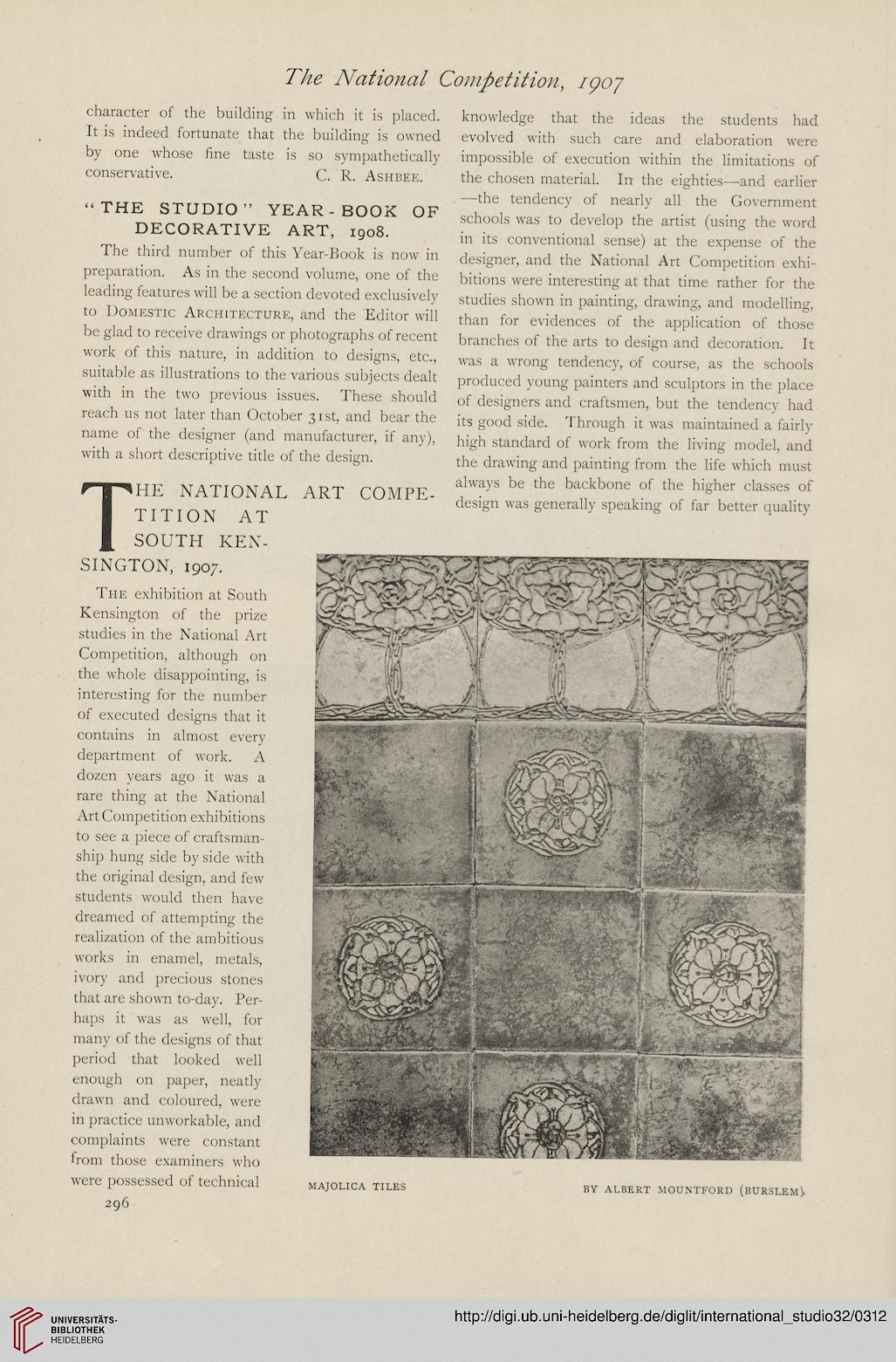 character of the building in which it is placed.
It is indeed fortunate that the building is owned
by one whose fine taste is so sympathetically
conservative. C. R. Ashbee.

The third number of this Year-Book is now in
preparation. As in the second volume, one of the
leading features will be a section devoted exclusively
to Domestic Architecture, and the Editor will
be glad to receive drawings or photographs of recent
work of this nature, in addition to designs, etc.,
suitable as illustrations to the various subjects dealt
with in the two previous issues. These should
reach us not later than October 31st, and bear the
name of the designer (and manufacturer, if any),
with a short descriptive title of the design.

The exhibition at South
Kensington of the prize
studies in the National Art
Competition, although on
the whole disappointing, is
interesting for the number
of executed designs that it
contains in almost every
department of work. A
dozen years ago it was a
rare thing at the National
Art Competition exhibitions
to see a piece of craftsman-
ship hung side by side with
the original design, and few
students would then have
dreamed of attempting the
realization of the ambitious
works in enamel, metals,
ivory and precious stones
that are shown to-day. Per-
haps it was as well, for
many of the designs of that
period that looked well
enough on paper, neatly
drawn and coloured, were
in practice unworkable, and
complaints were constant
from those examiners who
were possessed of technical
296

knowledge that the ideas the students had
evolved with such care and elaboration were
impossible of execution within the limitations of
the chosen material. In the eighties—and earlier
—the tendency of nearly all the Government
schools was to develop the artist (using the word
in its conventional sense) at the expense of the
designer, and the National Art Competition exhi-
bitions were interesting at that time rather for the
studies shown in painting, drawing, and modelling,
than for evidences of the application of those
branches of the arts to design and decoration. It
was a wrong tendency, of course, as the schools
produced young painters and sculptors in the place
of designers and craftsmen, but the tendency had
its good side. Through it was maintained a fairly
high standard of work from the living model, and
the drawing and painting from the life which must
always be the backbone of the higher classes of
design was generally speaking of far better quality