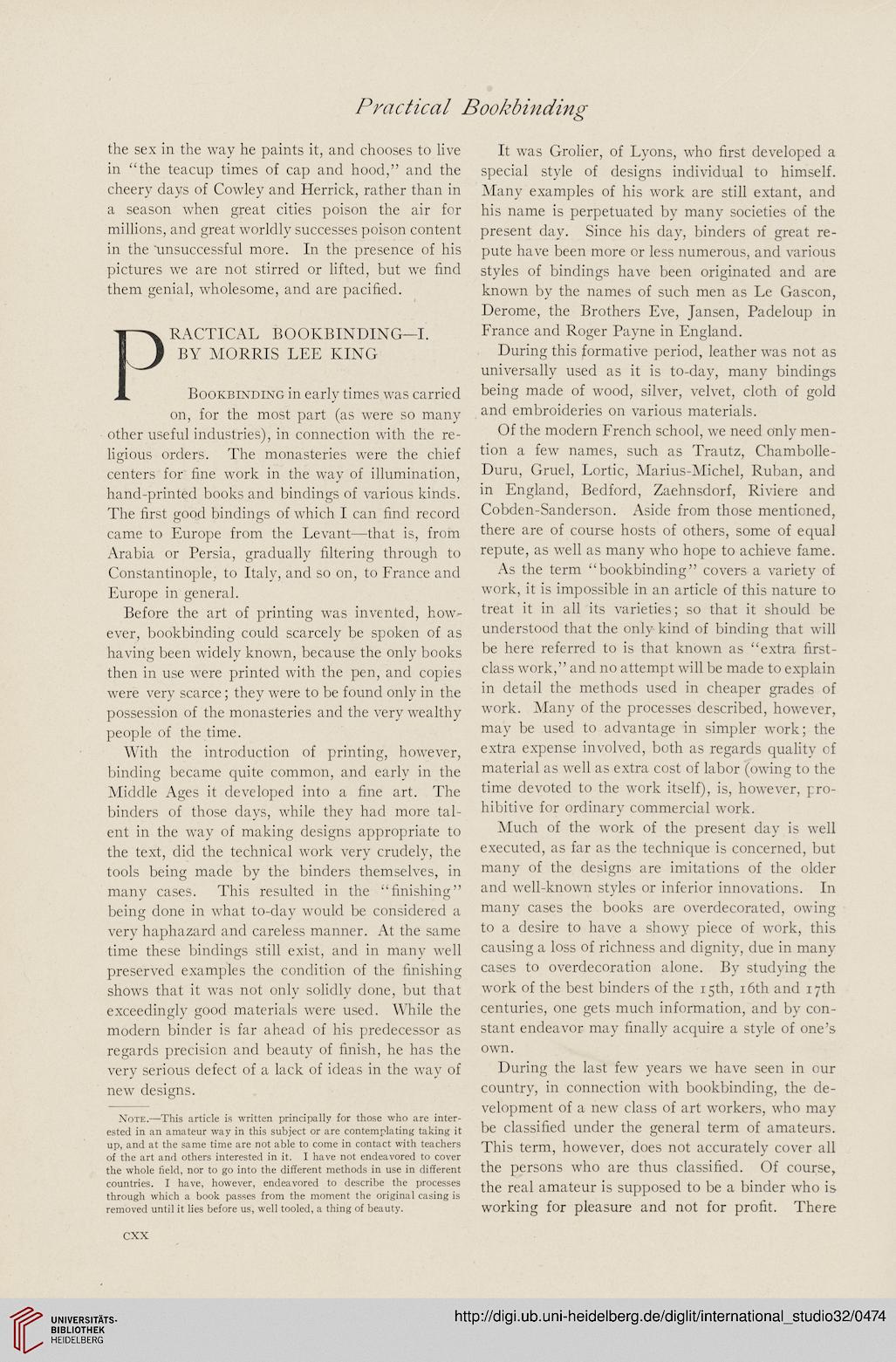 the sex in the way he paints it, and chooses to live
in “the teacup times of cap and hood,” and the
cheery days of Cowley and Herrick, rather than in
a season when great cities poison the air for
millions, and great worldly successes poison content
in the 'unsuccessful more. In the presence of his
pictures we are not stirred or lifted, but we find
them genial, wholesome, and are pacified.

Bookbinding in early times was carried
on, for the most part (as were so many
other useful industries), in connection with the re-
ligious orders. The monasteries were the chief
centers for fine work in the way of illumination,
hand-printed books and bindings of various kinds.
The first good bindings of which I can find record
came to Europe from the Levant—that is, from
Arabia or Persia, gradually filtering through to
Constantinople, to Italy, and so on, to France and
Europe in general.

Before the art of printing was invented, how-
ever, bookbinding could scarcely be spoken of as
having been widely known, because the only books
then in use were printed with the pen, and copies
were very scarce; they were to be found only in the
possession of the monasteries and the very wealthy
people of the time.

With the introduction of printing, however,
binding became quite common, and early in the
Middle Ages it developed into a fine art. The
binders of those days, while they had more tal-
ent in the way of making designs appropriate to
the text, did the technical work very crudely, the
tools being made by the binders themselves, in
many cases. This resulted in the “finishing”
being done in what to-day would be considered a
very haphazard and careless manner. At the same
time these bindings still exist, and in many well
preserved examples the condition of the finishing
shows that it was not only solidly done, but that
exceedingly good materials were used. While the
modern binder is far ahead of his predecessor as
regards precision and beauty of finish, he has the
very serious defect of a lack of ideas in the way of
new designs.

Note.—This article is written principally for those who are inter-
ested in an amateur way in this subject or are contemplating taking it
up, and at the same time are not able to come in contact with teachers
of the art and others interested in it. I have not endeavored to cover
the whole field, nor to go into the different methods in use in different
countries. I have, however, endeavored to describe the processes
through which a book passes from the moment the original casing is
removed until it lies before us, well tooled, a thing of beauty.

It was Grolier, of Lyons, who first developed a
special style of designs individual to himself.
Many examples of his work are still extant, and
his name is perpetuated by many societies of the
present day. Since his day, binders of great re-
pute have been more or less numerous, and various
styles of bindings have been originated and are
known by the names of such men as Le Gascon,
Derome, the Brothers Eve, Jansen, Padeloup in
France and Roger Payne in England.

During this formative period, leather was not as
universally used as it is to-day, many bindings
being made of wood, silver, velvet, cloth of gold
and embroideries on various materials.

Of the modern French school, we need Only men-
tion a few names, such as Trautz, Chambolle-
Duru, Gruel, Lortic, Marius-Michel, Ruban, and
in England, Bedford, Zaehnsdorf, Riviere and
Cobden-Sanderson. Aside from those mentioned,
there are of course hosts of others, some of equal
repute, as well as many who hope to achieve fame.

As the term “bookbinding” covers a variety of
work, it is impossible in an article of this nature to
treat it in all its varieties; so that it should be
understood that the only kind of binding that will
be here referred to is that known as “extra first-
class work,” and no attempt will be made to explain
in detail the methods used in cheaper grades of
work. Many of the processes described, however,
may be used to advantage in simpler work; the
extra expense involved, both as regards quality of
material as well as extra cost of labor (owing to the
time devoted to the work itself), is, however, pro-
hibitive for ordinary commercial work.

Much of the work of the present day is well
executed, as far as the technique is concerned, but
many of the designs are imitations of the older
and well-known styles or inferior innovations. In
many cases the books are overdecorated, owing
to a desire to have a showy piece of work, this
causing a loss of richness and dignity, due in many
cases to overdecoration alone. By studying the
work of the best binders of the 15th, 16th and 17th
centuries, one gets much information, and by con-
stant endeavor may finally acquire a style of one’s
own.

During the last few years we have seen in our
country, in connection with bookbinding, the de-
velopment of a new class of art workers, who may
be classified under the general term of amateurs.
This term, however, does not accurately cover all
the persons who are thus classified. Of course,
the real amateur is supposed to be a binder who is
working for pleasure and not for profit. There