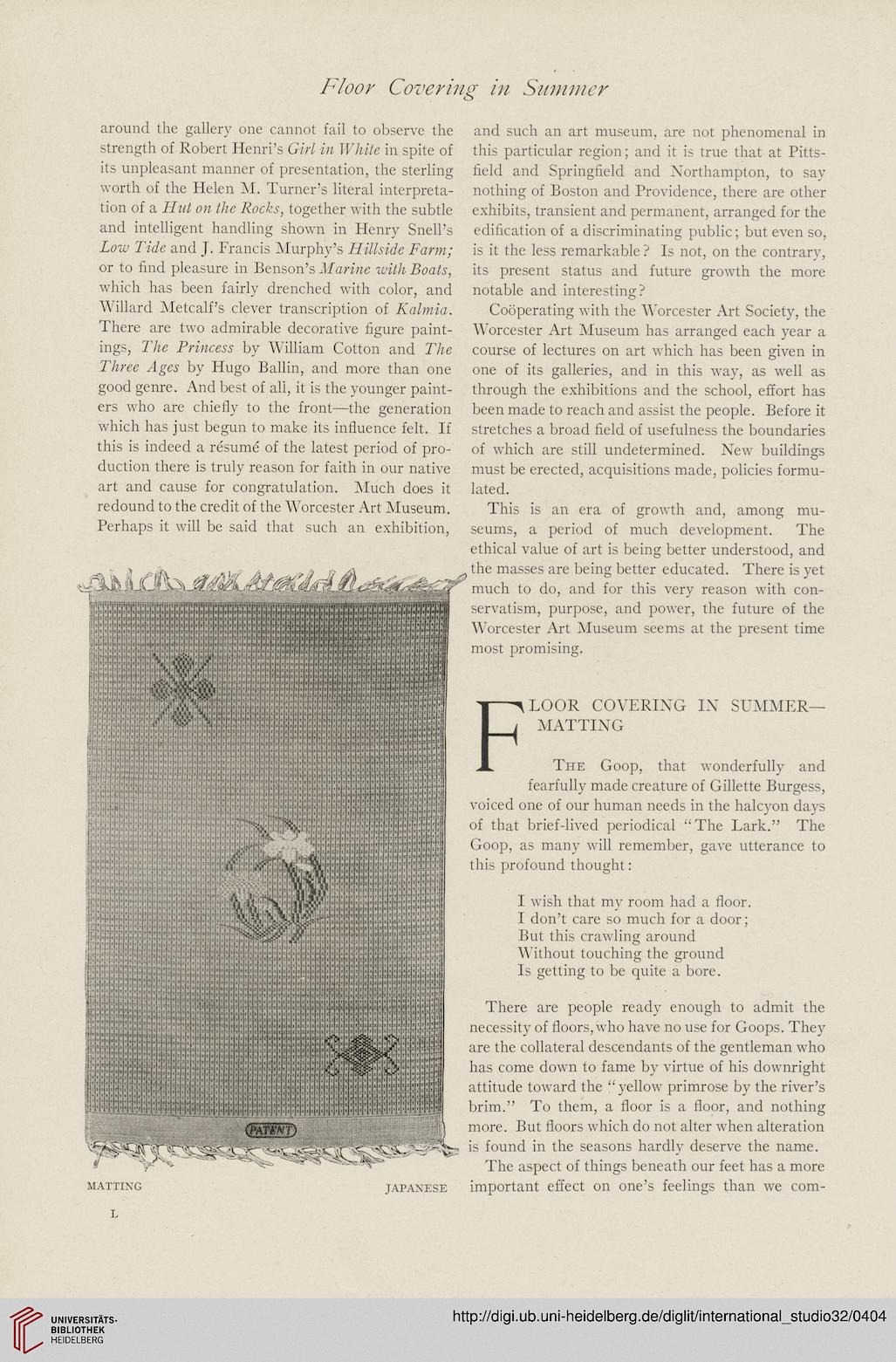 around the gallery one cannot fail to observe the
strength of Robert Henri’s Girl in White in spite of
its unpleasant manner of presentation, the sterling
worth of the Helen M. Turner’s literal interpreta-
tion of a Hut on the Rocks, together with the subtle
and intelligent handling shown in Henry Snell’s
Low Tide and J. Francis Murphy’s Hillside Farm;
or to find pleasure in Benson’s Marine with Boats,
which has been fairly drenched with color, and
Willard Metcalf’s clever transcription of Kalmia.
There are two admirable decorative figure paint-
ings, The Princess by William Cotton and The
Three Ages by Hugo Ballin, and more than one
good genre. And best of all, it is the younger paint-
ers who are chiefly to the front—the generation
which has just begun to make its influence felt. If
this is indeed a resume of the latest period of pro-
duction there is truly reason for faith in our native
art and cause for congratulation. Much does it
redound to the credit of the Worcester Art Museum.
Perhaps it will be said that such an exhibition,

and such an art museum, are not phenomenal in
this particular region; and it is true that at Pitts-
field and Springfield and Northampton, to say
nothing of Boston and Providence, there are other
exhibits, transient and permanent, arranged for the
edification of a discriminating public; but even so,
is it the less remarkable ? Is not, on the contrary,
its present status and future growth the more
notable and interesting?

Cooperating with the Worcester Art Society, the
Worcester Art Museum has arranged each year a
course of lectures on art which has been given in
one of its galleries, and in this way, as well as
through the exhibitions and the school, effort has
been made to reach and assist the people. Before it
stretches a broad field of usefulness the boundaries
of which are still undetermined. New buildings
must be erected, acquisitions made, policies formu-
lated.

This is an era of growth and, among mu-
seums, a period of much development. The
ethical value of art is being better understood, and
the masses are being better educated. There is yet
much to do, and for this very reason with con-
servatism, purpose, and power, the future of the
Worcester Art Museum seems at the present time
most promising.

The Goop, that wonderfully and
fearfully made creature of Gillette Burgess,
voiced one of our human needs in the halcyon days
of that brief-lived periodical “The Lark.” The
Goop, as many will remember, gave utterance to
this profound thought:

I wish that my room had a floor.

I don’t care so much for a door;

But this crawling around
Without touching the ground
Is getting to be quite a bore.

There are people ready enough to admit the
necessity of floors, who have no use for Goops. They
are the collateral descendants of the gentleman who
has come down to fame by virtue of his downright
attitude toward the “yellow primrose by the river’s
brim.” To them, a floor is a floor, and nothing
more. But floors which do not alter when alteration
is found in the seasons hardly deserve the name.