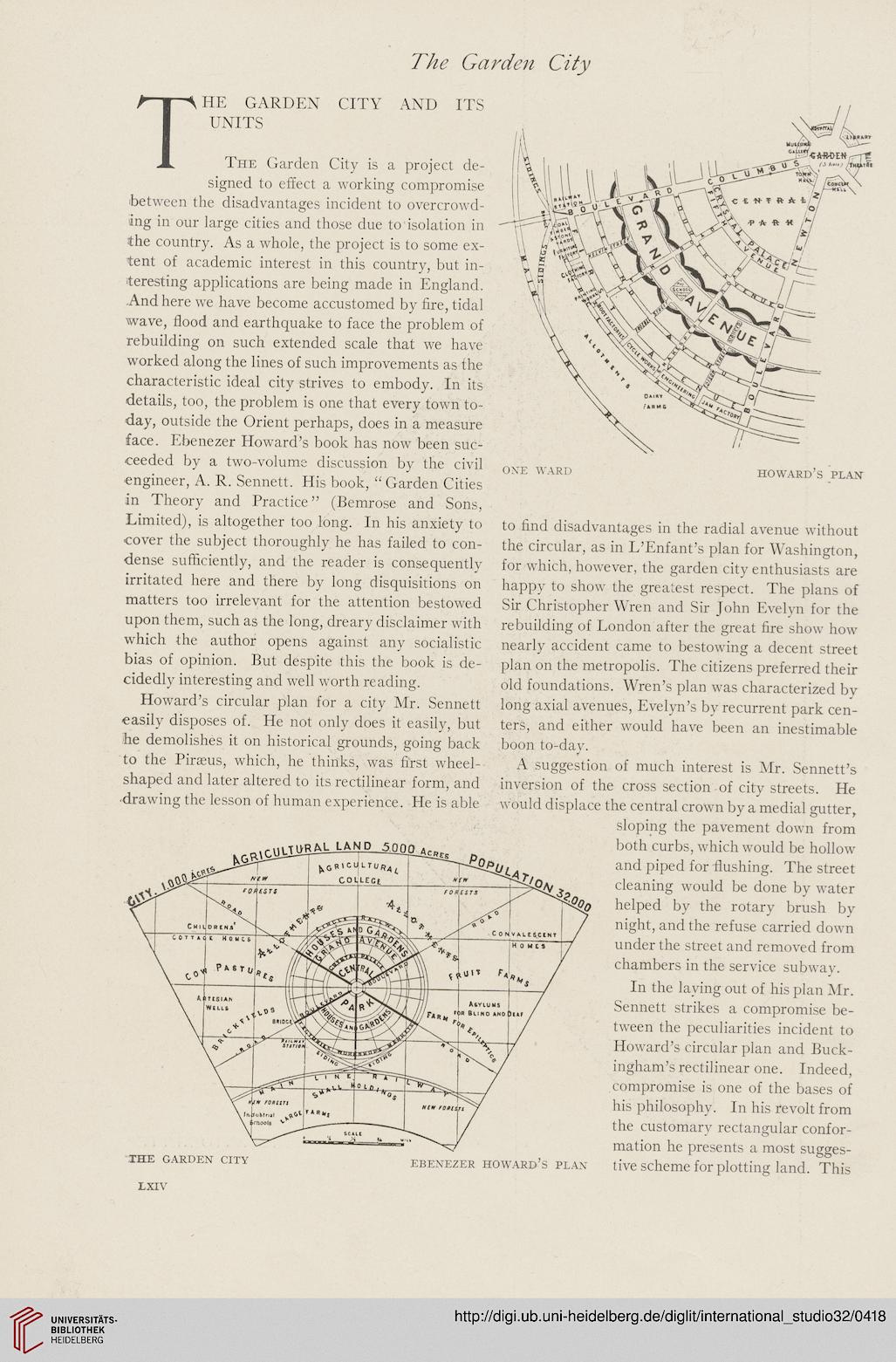 The Garden City is a project de-
signed to effect a working compromise
between the disadvantages incident to overcrowd-
ing in our large cities and those due to isolation in
the country. As a whole, the project is to some ex-
tent of academic interest in this country, but in-
teresting applications are being made in England.
.And here we have become accustomed by fire, tidal
wave, flood and earthquake to face the problem of
rebuilding on such extended scale that we have
worked along the lines of such improvements as the
characteristic ideal city strives to embody. In its
details, too, the problem is one that every town to-
day, outside the Orient perhaps, does in a measure
face. Ebenezer Howard’s book has now been suc-
ceeded by a two-volume discussion by the civil
engineer, A. R. Sennett. His book, “ Garden Cities
in Theory and Practice ” (Bemrose and Sons,
Limited), is altogether too long. In his anxiety to
cover the subject thoroughly he has failed to con-
dense sufficiently, and the reader is consequently
irritated here and there by long disquisitions on
matters too irrelevant for the attention bestowed
upon them, such as the long, dreary disclaimer with
which the author opens against any socialistic
bias of opinion. But despite this the book is de-
cidedly interesting and well worth reading.

Howard’s circular plan for a city Mr. Sennett
easily disposes of. He not only does it easily, but
he demolishes it on historical grounds, going back
to the Piraeus, which, he thinks, was first wheel-
shaped and later altered to its rectilinear form, and
•drawing the lesson of human experience. He is able

to find disadvantages in the radial avenue without
the circular, as in L’Enfant’s plan for Washington,
for which, however, the garden city enthusiasts are
happy to show the greatest respect. The plans of
Sir Christopher Wren and Sir John Evelyn for the
rebuilding of London after the great fire show how
nearly accident came to bestowing a decent street
plan on the metropolis. The citizens preferred their
old foundations. Wren’s plan was characterized by
long axial avenues, Evelyn’s by recurrent park cen-
ters, and either would have been an inestimable
boon to-day.

A suggestion of much interest is Mr. Sennett’s
inversion of the cross section of city streets. He
would displace the central crown by a medial gutter,
sloping the pavement down from
both curbs, which would be hollow
and piped for flushing. The street
cleaning would be done by water
helped by the rotary brush by
night, and the refuse carried down
under the street and removed from
chambers in the service subway.

In the laying out of his plan Mr.
Sennett strikes a compromise be-
tween the peculiarities incident to
Howard’s circular plan and Buck-
ingham’s rectilinear one. Indeed,
compromise is one of the bases of
his philosophy. In his revolt from
the customary rectangular confor-
mation he presents a most sugges-
tive scheme for plotting land. This