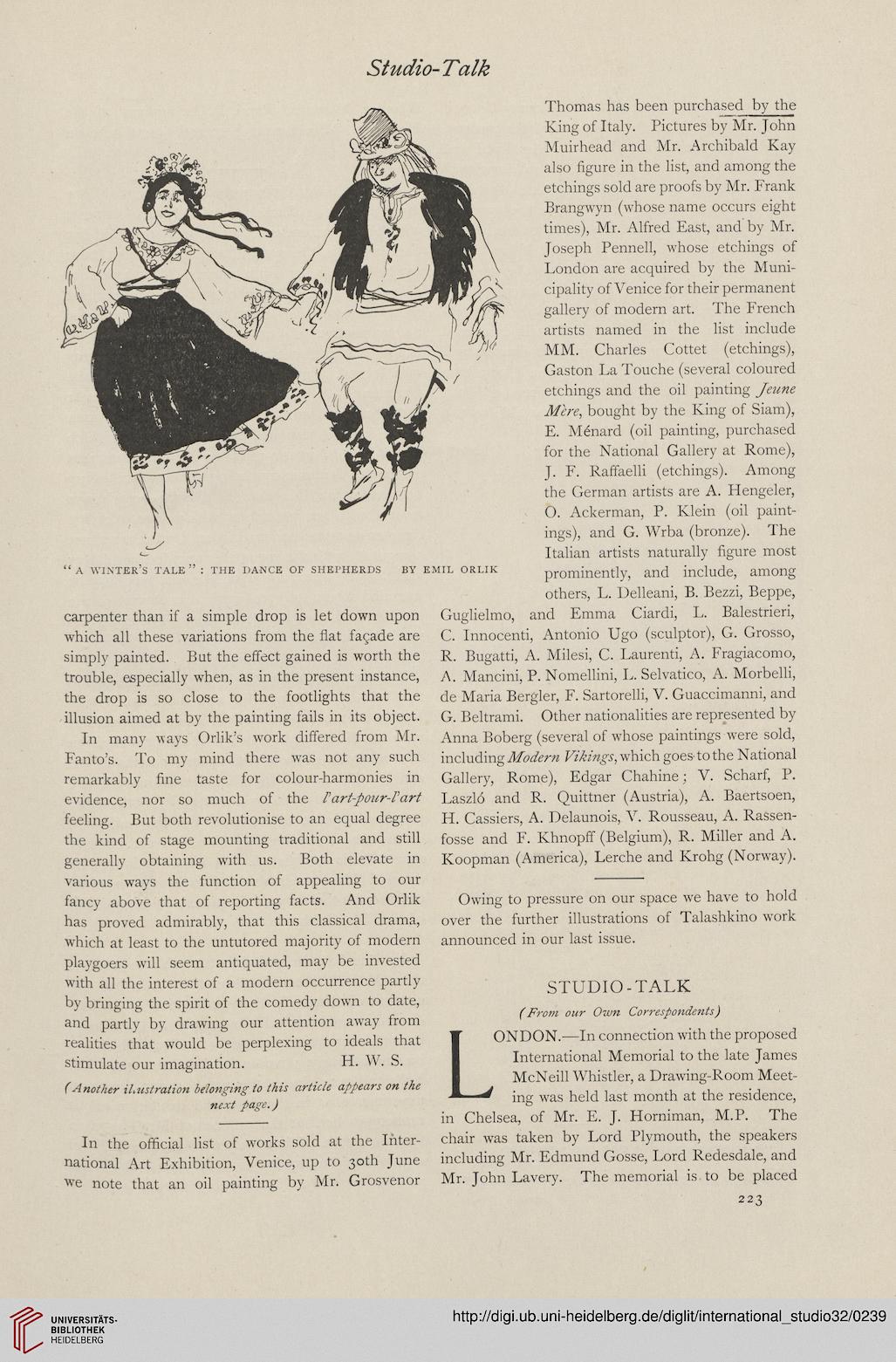 “ A WINTER’S TALE ” : THE DANCE OF SHEPHERDS BY EMIL ORI.IK

carpenter than if a simple drop is let down upon
which all these variations from the flat fagade are
simply painted. But the effect gained is worth the
trouble, especially when, as in the present instance,
the drop is so close to the footlights that the
illusion aimed at by the painting fails in its object.

In many ways Orlik’s work differed from Mr.
Fanto’s. To my mind there was not any such
remarkably fine taste for colour-harmonies in
evidence, nor so much of the P art-pour-l'art
feeling. But both revolutionise to an equal degree
the kind of stage mounting traditional and still
generally obtaining with us. Both elevate in
various ways the function of appealing to our
fancy above that of reporting facts. And Orlik
has proved admirably, that this classical drama,
which at least to the untutored majority of modern
playgoers will seem antiquated, may be invested
with all the interest of a modern occurrence partly
by bringing the spirit of the comedy down to date,
and partly by drawing our attention away from
realities that would be perplexing to ideals that
stimulate our imagination. H. W. S.

(Another illustration belonging to this article appears on the
next page.)

Thomas has been purchased by the
King of Italy. Pictures by Mr. John
Muirhead and Mr. Archibald Kay
also figure in the list, and among the
etchings sold are proofs by Mr. Frank
Brangwyn (whose name occurs eight
times), Mr. Alfred East, and by Mr.
Joseph Pennell, whose etchings of
London are acquired by the Muni-
cipality of Venice for their permanent
gallery of modern art. The French
artists named in the list include
MM. Charles Cottet (etchings),
Gaston La Touche (several coloured
etchings and the oil painting Jeune
Mere, bought by the King of Siam),
E. Menard (oil painting, purchased
for the National Gallery at Rome),
J. F. Raffaelli (etchings). Among
the German artists are A. Hengeler,
O. Ackerman, P. Klein (oil paint-
ings), and G. Wrba (bronze). The
Italian artists naturally figure most
prominently, and include, among
others, L. Uelleani, B. Bezzi, Beppe,
Guglielmo, and Emma Ciardi, L. Balestrieri,
C. Innocenti, Antonio Ugo (sculptor), G. Grosso,
R. Bugatti, A. Milesi, C. Laurenti, A. Fragiacomo,
A. Mancini, P. Nomellini, L. Selvatico, A. Morbelli,
de Maria Bergler, F. Sartorelli, V. Guaccimanni, and

G. Beltrami. Other nationalities are represented by
Anna Boberg (several of whose paintings were sold,
including Modern Vikings, which goes-to the National
Gallery, Rome), Edgar Chahine; V. Scharf, P.
Laszld and R. Quittner (Austria), A. Baertsoen,

In the official list of works sold at the Inter-
national Art Exhibition, Venice, up to 30th June
we note that an oil painting by Mr. Grosvenor

Owing to pressure on our space we have to hold
over the further illustrations of Talashkino work
announced in our last issue.

LONDON.—In connection with the proposed
International Memorial to the late James
McNeill Whistler, a Drawing-Room Meet-
ing was held last month at the residence,
in Chelsea, of Mr. E. J. Horniman, M.P. The
chair was taken by Lord Plymouth, the speakers
including Mr. Edmund Gosse, Lord Redesdale, and
Mr. John Lavery. The memorial is to be placed