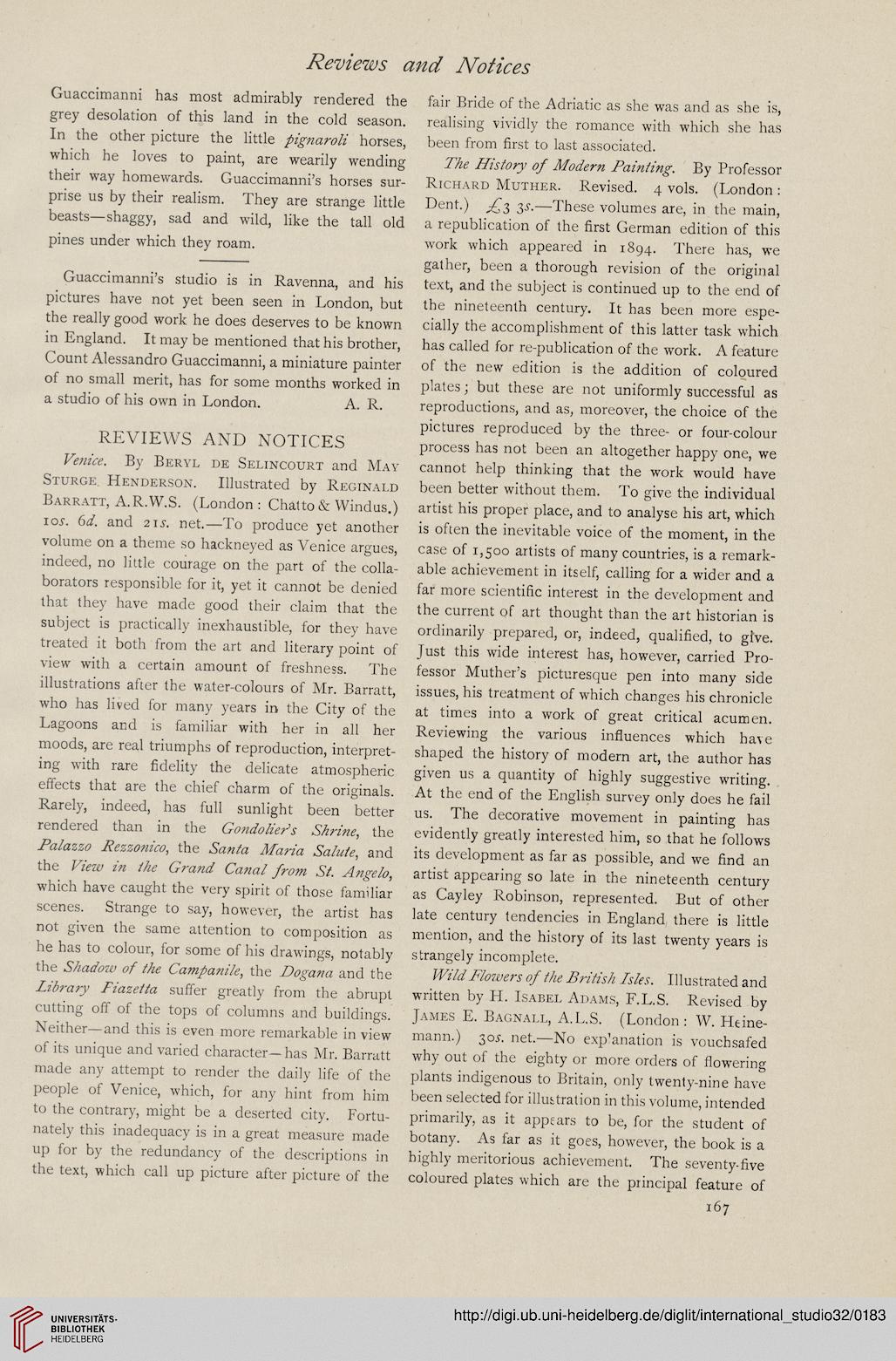 Guaccimanni has most admirably rendered the
grey desolation of this land in the cold season.
In the other picture the little pignaroli horses,
which he loves to paint, are wearily wending
their way homewards. Guaccimanni’s horses sur-
prise us by their realism. They are strange little
beasts—shaggy, sad and wild, like the tall old
pines under which they roam.

Guaccimanni’s studio is in Ravenna, and his
pictures have not yet been seen in London, but
the really good work he does deserves to be known
in England. It may be mentioned that his brother,
Count Alessandro Guaccimanni, a miniature painter
of no small merit, has for some months worked in
a studio of his own in London. A. R.

Venice. By Beryl de Selincourt and May
Sturge Henderson. Illustrated by Reginald
Barratt, A.R.W.S. (London : Chatto& Windus.)
ior. 6d. and 21L net.—To produce yet another
volume on a theme so hackneyed as Venice argues,
indeed, no little courage on the part of the colla-
borators responsible for it, yet it cannot be denied
that they have made good their claim that the
subject is practically inexhaustible, for they have
treated it both from the art and literary point of
view with a certain amount of freshness. The
illustrations after the water-colours of Mr. Barratt,
who has lived for many years in the City of the
Lagoons and is familiar with her in all her
moods, are real triumphs of reproduction, interpret-
ing with rare fidelity the delicate atmospheric
effects that are the chief charm of the originals.
Rarely, indeed, has full sunlight been better
rendered than in the Gondoliers Shrine, the
Palazzo Rezzonico, the Santa Maria Salute, and
the View in the Grand Canal from St. Angelo,
which have caught the very spirit of those familiar
scenes. Strange to say, however, the artist has
not given the same attention to composition as
he has to colour, for some of his drawings, notably
the Shadow of the Campanile, the Dogana and the
Library Fiazetta suffer greatly from the abrupt
cutting off of the tops of columns and buildings.
Neither—and this is even more remarkable in view
of its unique and varied character— has Mr. Barratt
made any attempt to render the daily life of the
people of Venice, which, for any hint from him
to the contrary, might be a deserted city. Fortu-
nately this inadequacy is in a great measure made
up for by the redundancy of the descriptions in
the text, which call up picture after picture of the

fair Bride of the Adriatic as she was and as she is,
realising vividly the romance with which she has
been from first to last associated.

The History of Modern Painting. By Professor
Richard Muther. Revised. 4 vols. (London :
Dent.) ^3 3.L—These volumes are, in the main,
a republication of the first German edition of this
work which appeared in 1894. There has, we
gather, been a thorough revision of the original
text, and the subject is continued up to the end of
the nineteenth century. It has been more espe-
cially the accomplishment of this latter task which
has called for re-publication of the work. A feature
of the new edition is the addition of coloured
plates; but these are not uniformly successful as
reproductions, and as, moreover, the choice of the
pictures reproduced by the three- or four-colour
process has not been an altogether happy one, we
cannot help thinking that the work would have
been better without them. To give the individual
artist his proper place, and to analyse his art, which
is often the inevitable voice of the moment, in the
case of 1,500 artists of many countries, is a remark-
able achievement in itself, calling for a wider and a
far more scientific interest in the development and
the current of art thought than the art historian is
ordinarily prepared, or, indeed, qualified, to give.
Just this wide interest has, however, carried Pro-
fessor Muther’s picturesque pen into many side
issues, his treatment of which changes his chronicle
at times into a work of great critical acumen.
Reviewing the various influences which have
shaped the history of modern art, the author has
given us a quantity of highly suggestive writing.
At the end of the English survey only does he fail
us. The decorative movement in painting has
evidently greatly interested him, so that he follows
its development as far as possible, and we find an
artist appearing so late in the nineteenth century
as Cayley Robinson, represented. But of other
late century tendencies in England there is little
mention, and the history of its last twenty years is
strangely incomplete.

Wild Flowers of the British Isles. Illustrated and
written by H. Isabel Adams, F.L.S. Revised by
James E. Bagnall, A.L.S. (London: W. Heine-
mann.) 30s. net.—No exp'anation is vouchsafed
why out of the eighty or more orders of flowering
plants indigenous to Britain, only twenty-nine have
been selected for illustration in this volume, intended
primarily, as it appears to be, for the student of
botany. As far as it goes, however, the book is a
highly meritorious achievement. The seventy-five
coloured plates which are the principal feature of