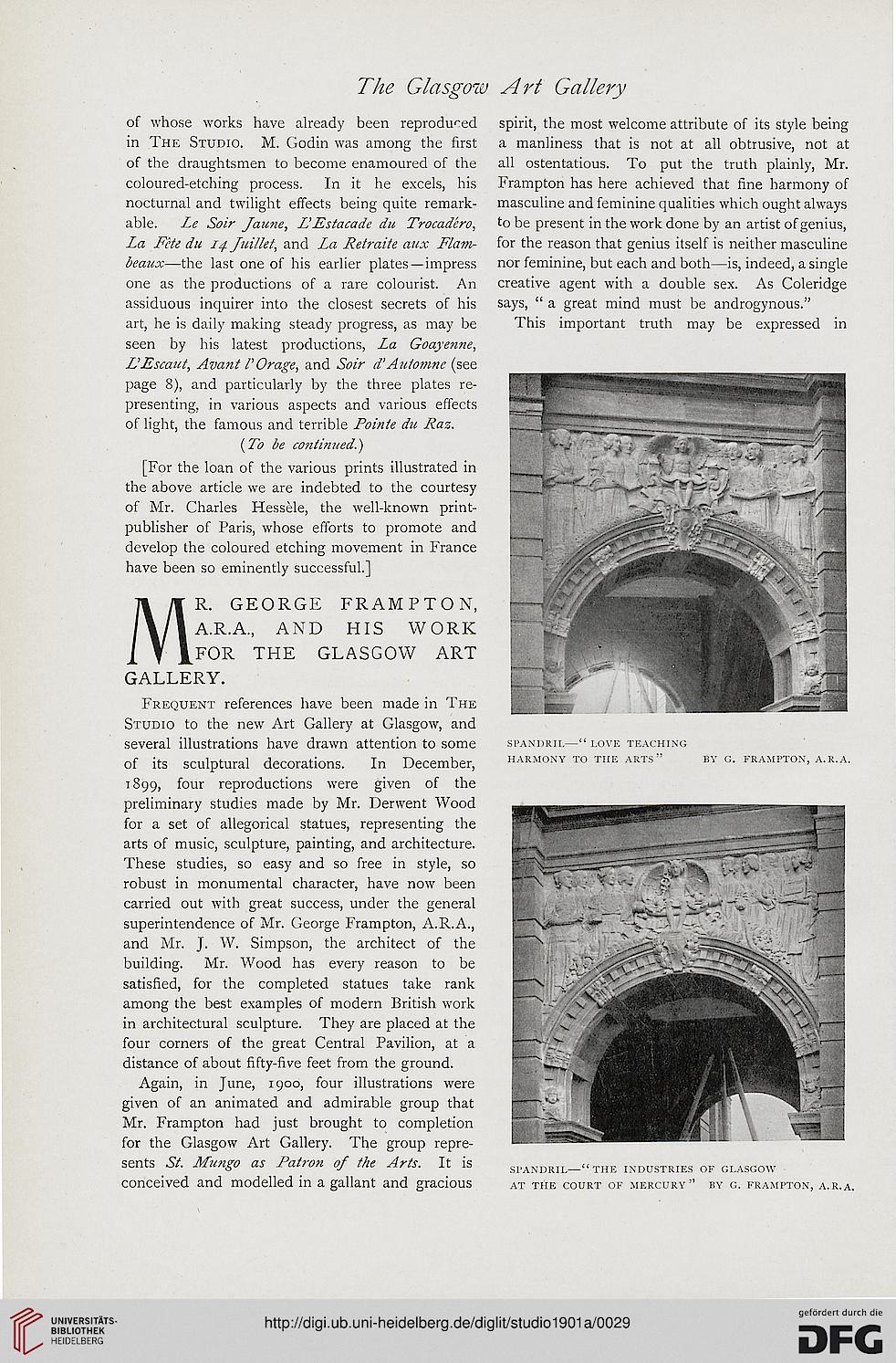 of whose works have already been reproduced
in The Studio. M. Godin was among the first
of the draughtsmen to become enamoured of the
coloured-etching process. In it he excels, his
nocturnal and twilight effects being quite remark-
able. Le Soir Jaune, L'Estacade du Trocadero,
La Fete du 14 Juillet, and La Retraite anx Flam-
beaux—the last one of his earlier plates—impress
one as the productions of a rare colourist. An
assiduous inquirer into the closest secrets of his
art, he is daily making steady progress, as may be
seen by his latest productions, La Goayenne,
L'Escaict, Avant POrage, and Soir d'Aulomne (see
page 8), and particularly by the three plates re-
presenting, in various aspects and various effects
of light, the famous and terrible Pointe du Raz.
(To be continued.)
[For the loan of the various prints illustrated in
the above article we are indebted to the courtesy
of Mr. Charles Hessele, the well-known print-
publisher of Paris, whose efforts to promote and
develop the coloured etching movement in France
have been so eminently successful.]

MR. GEORGE FRAMPTON,
A.R.A., AND HIS WORK
FOR THE GLASGOW ART
GALLERY.

Frequent references have been made in The
Studio to the new Art Gallery at Glasgow, and
several illustrations have drawn attention to some
of its sculptural decorations. In December,
1899, four reproductions were given of the
preliminary studies made by Mr. Derwent Wood
for a set of allegorical statues, representing the
arts of music, sculpture, painting, and architecture.
These studies, so easy and so free in style, so
robust in monumental character, have now been
carried out with great success, under the general
superintendence of Mr. George Frampton, A.R.A.,
and Mr. J. W. Simpson, the architect of the
building. Mr. Wood has every reason to be
satisfied, for the completed statues take rank
among the best examples of modern British work
in architectural sculpture. They are placed at the
four corners of the great Central Pavilion, at a
distance of about fifty-five feet from the ground.

Again, in June, 1900, four illustrations were
given of an animated and admirable group that
Mr. Frampton had just brought to completion
for the Glasgow Art Gallery. The group repre-
sents St. Mungo as L}atron of the Arts. It is
conceived and modelled in a gallant and gracious

spirit, the most welcome attribute of its style being
a manliness that is not at all obtrusive, not at
all ostentatious. To put the truth plainly, Mr.
Frampton has here achieved that fine harmony of
masculine and feminine qualities which ought always
to be present in the work done by an artist of genius,
for the reason that genius itself is neither masculine
nor feminine, but each and both—is, indeed, a single
creative agent with a double sex. As Coleridge
says, " a great mind must be androgynous."
This important truth may be expressed in

AT THE COURT OF MERCURY" BY G. FRAMPTON, A.R.A.