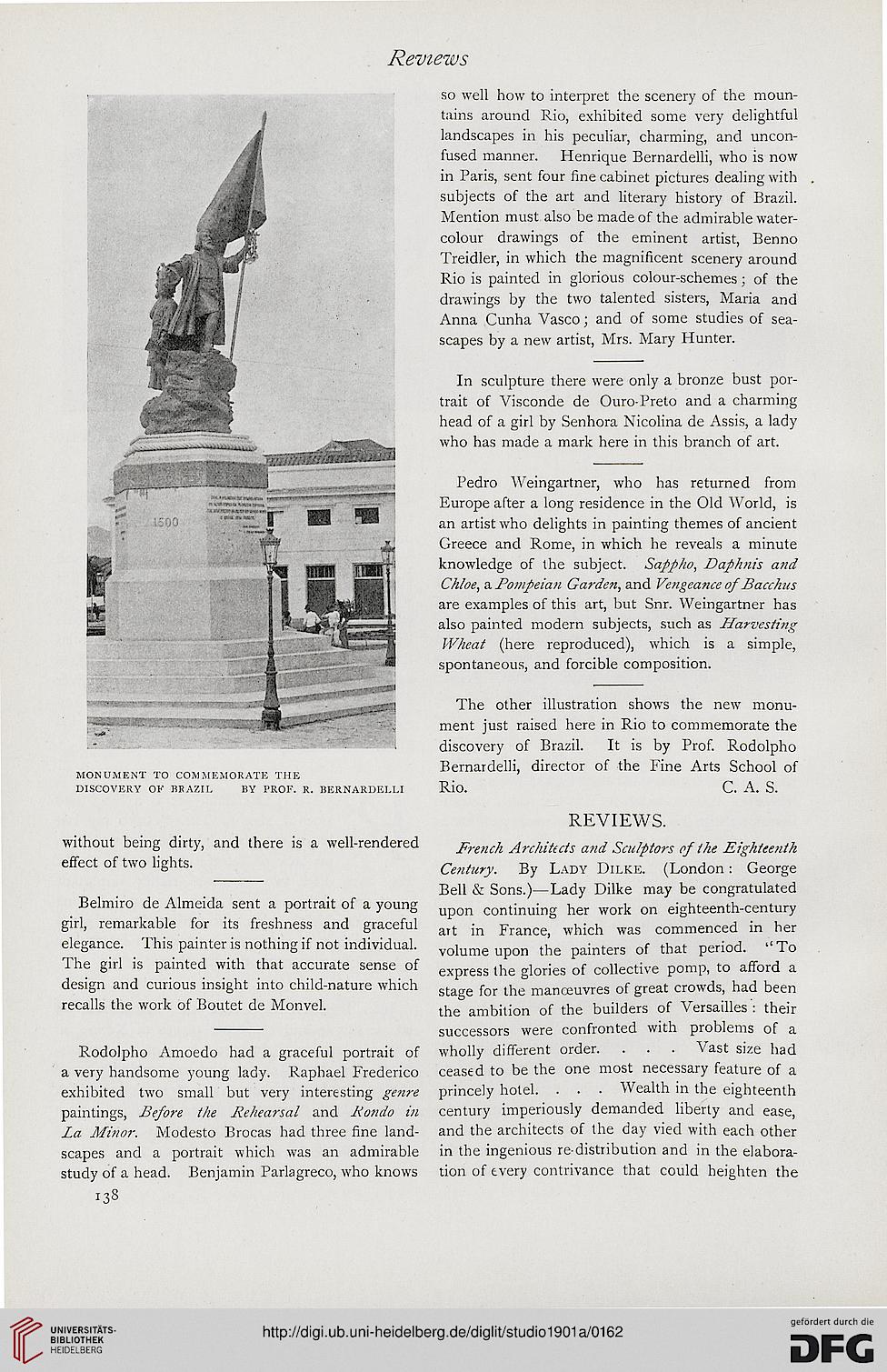 MONUMENT TO COMMEMORATE THE

without being dirty, and there is a well-rendered
effect of two lights.

Belmiro de Almeida sent a portrait of a young
girl, remarkable for its freshness and graceful
elegance. This painter is nothing if not individual.
The girl is painted with that accurate sense of
design and curious insight into child-nature which
recalls the work of Boutet de Monvel.

Rodolpho Amoedo had a graceful portrait of
a very handsome young lady. Raphael Frederico
exhibited two small but very interesting genre
paintings, Before the Rehearsal and Rondo in
La Minor. Modesto Brocas had three fine land-
scapes and a portrait which was an admirable
study of a head. Benjamin Parlagreco, who knows

so well how to interpret the scenery of the moun-
tains around Rio, exhibited some very delightful
landscapes in his peculiar, charming, and uncon-
fused manner. Henrique Bernardelli, who is now
in Paris, sent four fine cabinet pictures dealing with
subjects of the art and literary history of Brazil.
Mention must also be made of the admirable water-
colour drawings of the eminent artist, Benno
Treidler, in which the magnificent scenery around
Rio is painted in glorious colour-schemes; of the
drawings by the two talented sisters, Maria and
Anna Cunha Vasco; and of some studies of sea-
scapes by a new artist, Mrs. Mary Hunter.

In sculpture there were only a bronze bust por-
trait of Visconde de Ouro-Preto and a charming
head of a girl by Senhora Nicolina de Assis, a lady
who has made a mark here in this branch of art.

Pedro Weingartner, who has returned from
Europe after a long residence in the Old World, is
an artist who delights in painting themes of ancient
Greece and Rome, in which he reveals a minute
knowledge of the subject. Sappho, Daphnis and
Chloe, a Potnpeian Garden, and Vengeance of Bacchus
are examples of this art, but Snr. Weingartner has
also painted modern subjects, such as Harvesting
Wheat (here reproduced), which is a simple,
spontaneous, and forcible composition.

The other illustration shows the new monu-
ment just raised here in Rio to commemorate the
discovery of Brazil. It is by Prof. Rodolpho
Bernardelli, director of the Fine Arts School of
Rio. C. A. S.

French Architects and Sculptors of the Eighteenth
Cetitury. By Lady Dilke. (London: George
Bell & Sons.)—Lady Dilke may be congratulated
upon continuing her work on eighteenth-century
art in France, which was commenced in her
volume upon the painters of that period. "To
express the glories of collective pomp, to afford a
stage for the manoeuvres of great crowds, had been
the ambition of the builders of Versailles : their
successors were confronted with problems of a
wholly different order. . . . Vast size had
ceased to be the one most necessary feature of a
princely hotel. . . . Wealth in the eighteenth
century imperiously demanded liberty and ease,
and the architects of the day vied with each other
in the ingenious re-distribution and in the elabora-
tion of every contrivance that could heighten the