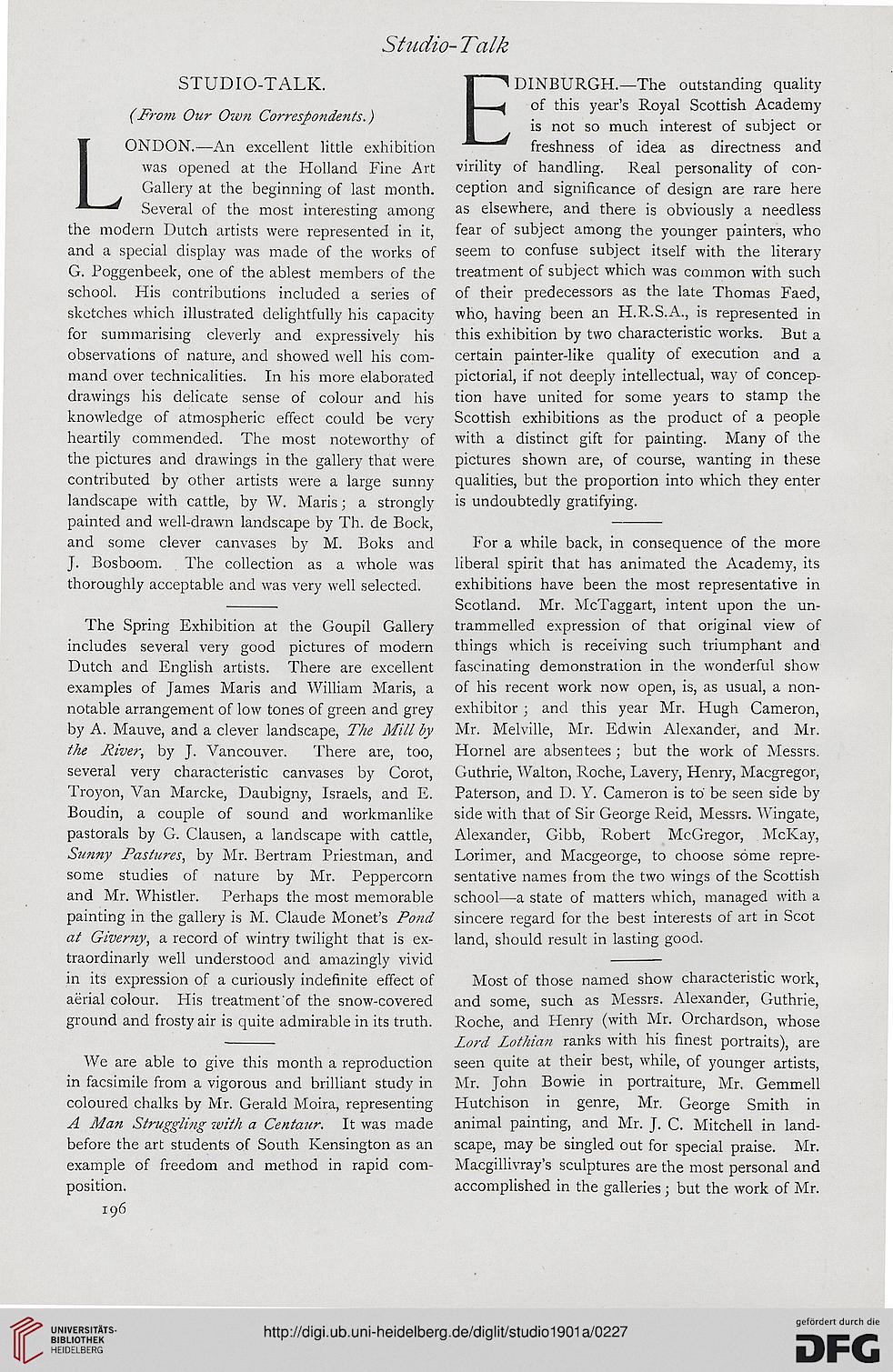 LONDON.—An excellent little exhibition
was opened at the Holland Fine Art
Gallery at the beginning of last month.
Several of the most interesting among
the modern Dutch artists were represented in it,
and a special display was made of the works of
G. Poggenbeek, one of the ablest members of the
school. His contributions included a series of
sketches which illustrated delightfully his capacity
for summarising cleverly and expressively his
observations of nature, and showed well his com-
mand over technicalities. In his more elaborated
drawings his delicate sense of colour and his
knowledge of atmospheric effect could be very
heartily commended. The most noteworthy of
the pictures and drawings in the gallery that were
contributed by other artists were a large sunny
landscape with cattle, by W. Maris; a strongly
painted and well-drawn landscape by Th. de Bock,
and some clever canvases by M. Boks and
J. Bosboom. The collection as a whole was
thoroughly acceptable and was very well selected.

The Spring Exhibition at the Goupil Gallery
includes several very good pictures of modern
Dutch and English artists. There are excellent
examples of James Maris and William Maris, a
notable arrangement of low tones of green and grey
by A. Mauve, and a clever landscape, The Mill by
the River, by J. Vancouver. There are, too,
several very characteristic canvases by Corot,
Troyon, Van Marcke, Daubigny, Israels, and E.
Boudin, a couple of sound and workmanlike
pastorals by G. Clausen, a landscape with cattle,
Sunny Pastures, by Mr. Bertram Priestman, and
some studies of nature by Mr. Peppercorn
and Mr. Whistler. Perhaps the most memorable
painting in the gallery is M. Claude Monet's Pond
at Giverny, a record of wintry twilight that is ex-
traordinary well understood and amazingly vivid
in its expression of a curiously indefinite effect of
aerial colour. His treatment of the snow-covered
ground and frosty air is quite admirable in its truth.

We are able to give this month a reproduction
in facsimile from a vigorous and brilliant study in
coloured chalks by Mr. Gerald Moira, representing
A Man Struggling with a Centaur. It was made
before the art students of South Kensington as an
example of freedom and method in rapid com-
position.
196

EDINBURGH.—The outstanding quality
of this year's Royal Scottish Academy
is not so much interest of subject or
freshness of idea as directness and
virility of handling. Real personality of con-
ception and significance of design are rare here
as elsewhere, and there is obviously a needless
fear of subject among the younger painters, who
seem to confuse subject itself with the literary
treatment of subject which was common with such
of their predecessors as the late Thomas Faed,
who, having been an H.R.S.A., is represented in
this exhibition by two characteristic works. But a
certain painter-like quality of execution and a
pictorial, if not deeply intellectual, way of concep-
tion have united for some years to stamp the
Scottish exhibitions as the product of a people
with a distinct gift for painting. Many of the
pictures shown are, of course, wanting in these
qualities, but the proportion into which they enter
is undoubtedly gratifying.

For a while back, in consequence of the more
liberal spirit that has animated the Academy, its
exhibitions have been the most representative in
Scotland. Mr. McTaggart, intent upon the un-
trammelled expression of that original view of
things which is receiving such triumphant and
fascinating demonstration in the wonderful show
of his recent work now open, is, as usual, a non-
exhibitor ; and this year Mr. Hugh Cameron,
Mr. Melville, Mr. Edwin Alexander, and Mr.
Hornel are absentees; but the work of Messrs.
Guthrie, Walton, Roche, Lavery, Henry, Macgregor,
Paterson, and D. Y. Cameron is to be seen side by
side with that of Sir George Reid, Messrs. Wingate,
Alexander, Gibb, Robert McGregor, McKay,
Lorimer, and Macgeorge, to choose some repre-
sentative names from the two wings of the Scottish
school—a state of matters which, managed with a
sincere regard for the best interests of art in Scot
land, should result in lasting good.

Most of those named show characteristic work,
and some, such as Messrs. Alexander, Guthrie,
Roche, and Henry (with Mr. Orchardson, whose
Lord Lothian ranks with his finest portraits), are
seen quite at their best, while, of younger artists,
Mr. John Bowie in portraiture, Mr. Gemmell
Hutchison in genre, Mr. George Smith in
animal painting, and Mr. J. C. Mitchell in land-
scape, may be singled out for special praise. Mr.
Macgillivray's sculptures are the most personal and
accomplished in the galleries; but the work of Mr.