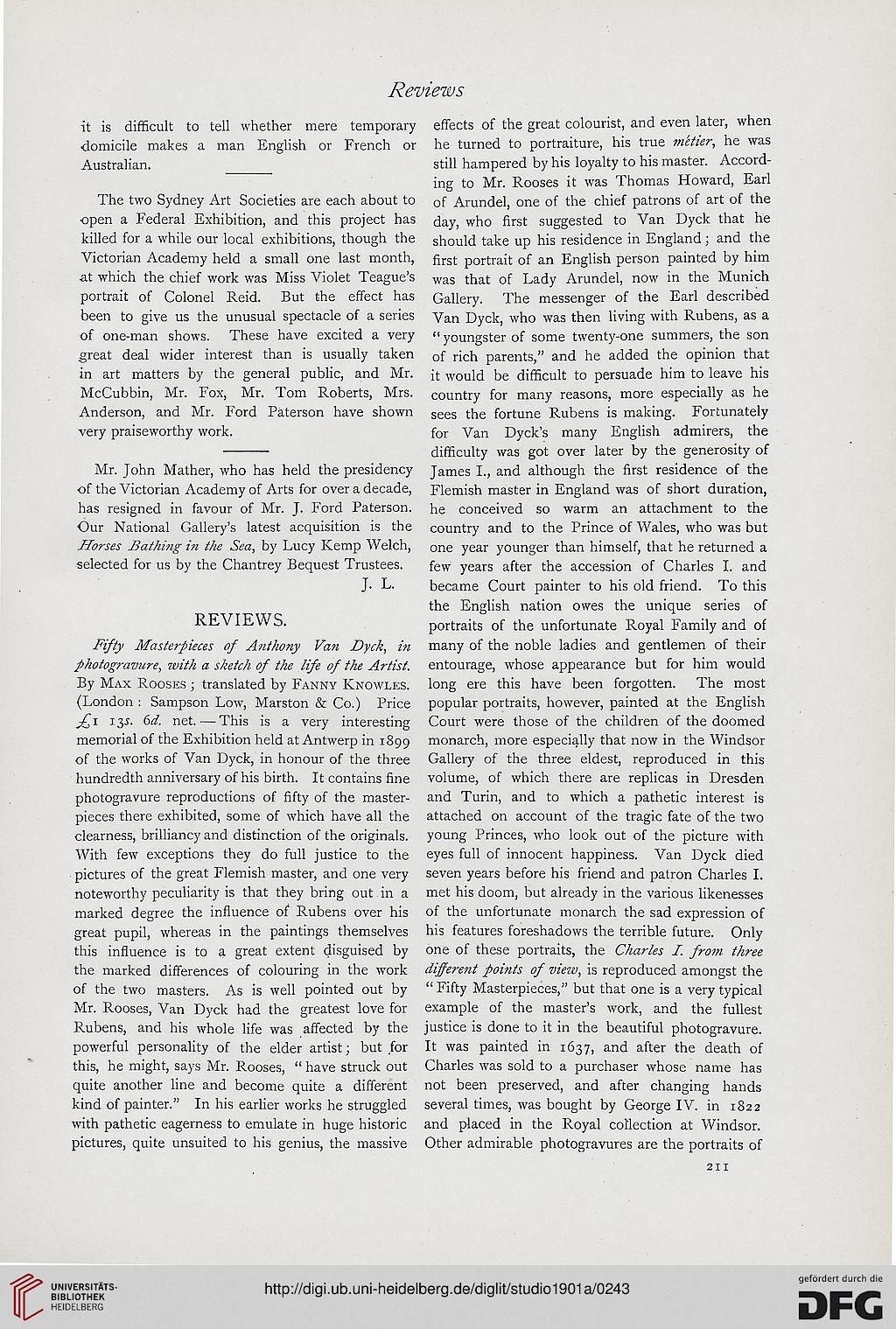 it is difficult to tell whether mere temporary
domicile makes a man English or French or
Australian.

The two Sydney Art Societies are each about to
open a Federal Exhibition, and this project has
killed for a while our local exhibitions, though the
Victorian Academy held a small one last month,
at which the chief work was Miss Violet Teague's
portrait of Colonel Reid. But the effect has
been to give us the unusual spectacle of a series
of one-man shows. These have excited a very
great deal wider interest than is usually taken
in art matters by the general public, and Mr.
McCubbin, Mr. Fox, Mr. Tom Roberts, Mrs.
Anderson, and Mr. P'ord Paterson have shown
very praiseworthy work.

Mr. John Mather, who has held the presidency
of the Victorian Academy of Arts for over a decade,
has resigned in favour of Mr. J. Ford Paterson.
Our National Gallery's latest acquisition is the
Horses Bathing in the Sea, by Lucy Kemp Welch,
selected for us by the Chantrey Bequest Trustees.

Fifty Masterpieces of Anthony Van Dyck, in
photogravure, with a sketch of the life of tlie Artist.
By Max Rooses ; translated by Fanny Knowles.
(London : Sampson Low, Marston & Co.) Price
jQi it,s. 6d. net.—This is a very interesting
memorial of the Exhibition held at Antwerp in 1899
of the works of Van Dyck, in honour of the three
hundredth anniversary of his birth. It contains fine
photogravure reproductions of fifty of the master-
pieces there exhibited, some of which have all the
clearness, brilliancy and distinction of the originals.
With few exceptions they do full justice to the
pictures of the great Flemish master, and one very
noteworthy peculiarity is that they bring out in a
marked degree the influence of Rubens over his
great pupil, whereas in the paintings themselves
this influence is to a great extent disguised by
the marked differences of colouring in the work
of the two masters. As is well pointed out by
Mr. Rooses, Van Dyck had the greatest love for
Rubens, and his whole life was affected by the
powerful personality of the elder artist; but for
this, he might, says Mr. Rooses, " have struck out
quite another line and become quite a different
kind of painter." In his earlier works he struggled
with pathetic eagerness to emulate in huge historic
pictures, quite unsuited to his genius, the massive

effects of the great colourist, and even later, when
he turned to portraiture, his true metier, he was
still hampered by his loyalty to his master. Accord-
ing to Mr. Rooses it was Thomas Howard, Earl
of Arundel, one of the chief patrons of art of the
day, who first suggested to Van Dyck that he
should take up his residence in England; and the
first portrait of an English person painted by him
was that of Lady Arundel, now in the Munich
Gallery. The messenger of the Earl described
Van Dyck, who was then living with Rubens, as a
"youngster of some twenty-one summers, the son
of rich parents," and he added the opinion that
it would be difficult to persuade him to leave his
country for many reasons, more especially as he
sees the fortune Rubens is making. Fortunately
for Van Dyck's many English admirers, the
difficulty was got over later by the generosity of
James I., and although the first residence of the
Flemish master in England was of short duration,
he conceived so warm an attachment to the
country and to the Prince of Wales, who was but
one year younger than himself, that he returned a
few years after the accession of Charles I. and
became Court painter to his old friend. To this
the English nation owes the unique series of
portraits of the unfortunate Royal Family and of
many of the noble ladies and gentlemen of their
entourage, whose appearance but for him would
long ere this have been forgotten. The most
popular portraits, however, painted at the English
Court were those of the children of the doomed
monarch, more especially that now in the Windsor
Gallery of the three eldest, reproduced in this
volume, of which there are replicas in Dresden
and Turin, and to which a pathetic interest is
attached on account of the tragic fate of the two
young Princes, who look out of the picture with
eyes full of innocent happiness. Van Dyck died
seven years before his friend and patron Charles I.
met his doom, but already in the various likenesses
of the unfortunate monarch the sad expression of
his features foreshadows the terrible future. Only
one of these portraits, the Charles I. from three
different points of view, is reproduced amongst the
"Fifty Masterpieces," but that one is a very typical
example of the master's work, and the fullest
justice is done to it in the beautiful photogravure.
It was painted in 1637, and after the death of
Charles was sold to a purchaser whose name has
not been preserved, and after changing hands
several times, was bought by George IV. in 1822
and placed in the Royal collection at Windsor.
Other admirable photogravures are the portraits of