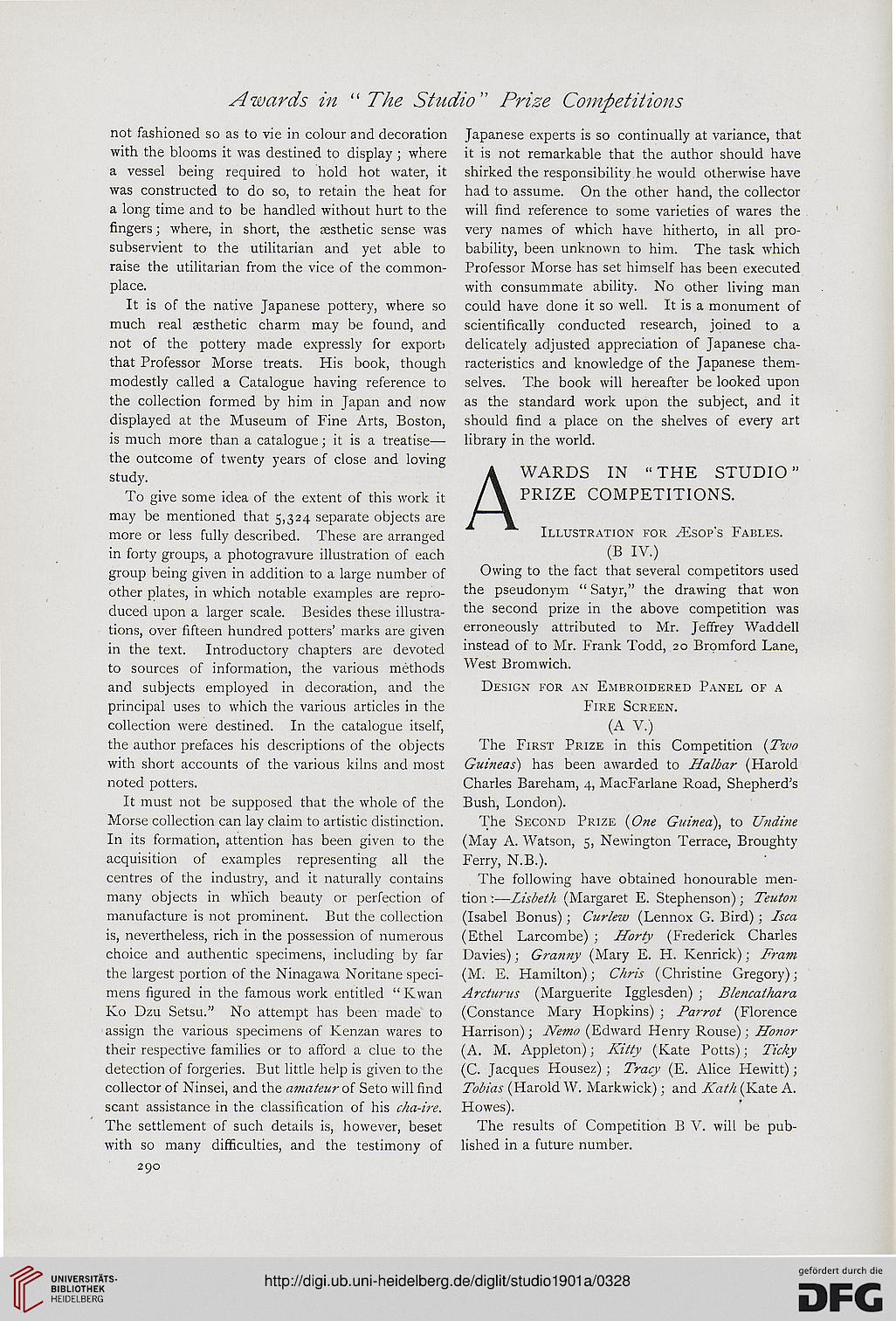 WARDS IN "THE STUDIO

not fashioned so as to vie in colour and decoration Japanese experts is so continually at variance, that
with the blooms it was destined to display ; where it is not remarkable that the author should have
a vessel being required to hold hot water, it shirked the responsibility he would otherwise have
was constructed to do so, to retain the heat for had to assume. On the other hand, the collector
a long time and to be handled without hurt to the will find reference to some varieties of wares the
fingers; where, in short, the aesthetic sense was very names of which have hitherto, in all pro-
subservient to the utilitarian and yet able to bability, been unknown to him. The task which
raise the utilitarian from the vice of the common- Professor Morse has set himself has been executed
place. with consummate ability. No other living man
It is of the native Japanese pottery, where so could have done it so well. It is a monument of
much real aesthetic charm may be found, and scientifically conducted research, joined to a
not of the pottery made expressly for exporb delicately adjusted appreciation of Japanese cha-
that Professor Morse treats. His book, though racteristics and knowledge of the Japanese them-
modestly called a Catalogue having reference to selves. The book will hereafter be looked upon
the collection formed by him in Japan and now as the standard work upon the subject, and it
displayed at the Museum of Fine Arts, Boston, should find a place on the shelves of every art
is much more than a catalogue; it is a treatise— library in the world,
the outcome of twenty years of close and loving
study.

To give some idea of the extent of this work it /\ PRIZE COMPETITIONS.

may be mentioned that 5,324 separate objects are

more or less fully described. These are arranged * *" Illustration for ^sops Fables.
in forty groups, a photogravure illustration of each (B IV.)

other plates, in which notable examples are repro- the pseudonym " Satyr," the drawing that won

duced upon a larger scale. Besides these illustra- the second prize in the above competition was

in the text. Introductory chapters are devoted instead of to Mr. Frank Todd, 20 Bromford Lane,

to sources of information, the various methods West Bromwich.

and subjects employed in decoration, and the Design for an Embroidered Panel of a
principal uses to which the various articles in the Fire Screen.

collection were destined. In the catalogue itself, (A V.)

It must not be supposed that the whole of the Bush, London).
Morse collection can lay claim to artistic distinction. The Second Prize (One Guinea), to Undine

In its formation, attention has been given to the (May A. Watson, 5, Newington Terrace, Broughty

acquisition of examples representing all the Ferry, N.B.).

centres of the industry, and it naturally contains The following have obtained honourable men-
many objects in which beauty or perfection of tion:—Lisbeth (Margaret E. Stephenson); Teuto?i
manufacture is not prominent. But the collection (Isabel Bonus); Curlew (Lennox G. Bird) ; Isca
is, nevertheless, rich in the possession of numerous (Ethel Larcombe) ; Horty (Frederick Charles
choice and authentic specimens, including by far Davies); Granny (Mary E. H. Kenrick); Fram
the largest portion of the Ninagawa Noritane speci- (M. E. Hamilton); Chris (Christine Gregory);
mens figured in the famous work entitled " Kwan Arcturus (Marguerite Igglesden) ; Blencathara
Ko Dzu Setsu." No attempt has been made to (Constance Mary Hopkins) ; Parrot (Florence
assign the various specimens of Kenzan wares to Harrison); Nemo (Edward Henry Rouse); Honor
their respective families or to afford a clue to the (A. M. Appleton); Kitty (Kate Potts); Ticky
detection of forgeries. But little help is given to the (C. Jacques Housez); Tracy (E. Alice Hewitt);
collector of Ninsei, and the amateur o{ Seto will find Tobias (Harold W. Markwick); and Katli (Kate A.
scant assistance in the classification of his cha-ire. Howes).

The settlement of such details is, however, beset The results of Competition B V. will be pub-

with so many difficulties, and the testimony of lished in a future number.
290