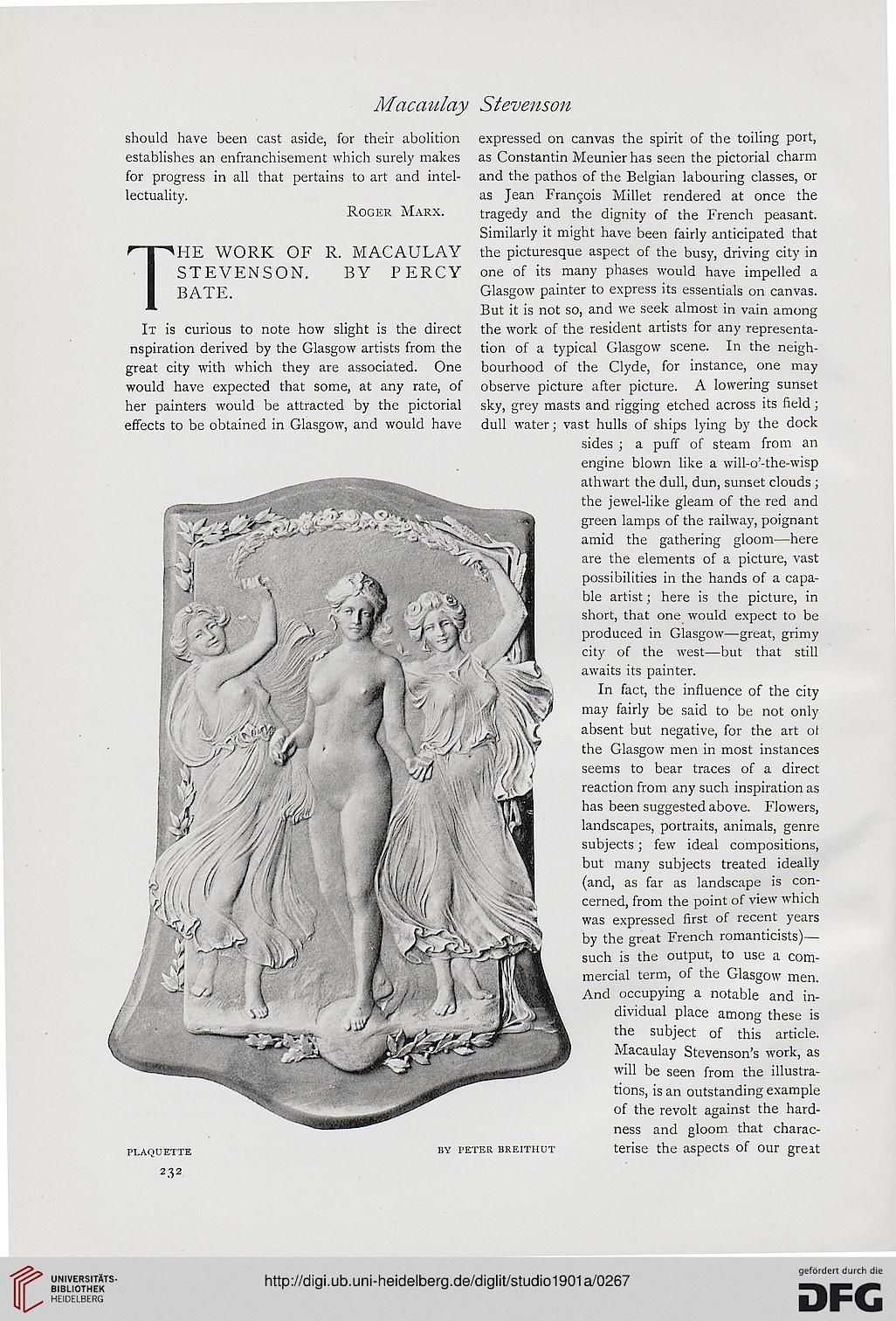 should have been cast aside, for their abolition expressed on canvas the spirit of the toiling port,
establishes an enfranchisement which surely makes as Constantin Meunier has seen the pictorial charm
for progress in all that pertains to art and intel- and the pathos of the Belgian labouring classes, or
lectuality. as Jean Franr^ois Millet rendered at once the

Roger Marx. tragedy and the dignity of the French peasant.

THE WORK OF R. MACAULAY the picturesque aspect of the busy, driving city in
STEVENSON. BY PERCY one of its many phases would have impelled a
BATE. Glasgow painter to express its essentials on canvas.

But it is not so, and we seek almost in vain among
It is curious to note how slight is the direct the work of the resident artists for any representa-
nspiration derived by the Glasgow artists from the tion of a typical Glasgow scene. In the neigh-
great city with which they are associated. One bourhood of the Clyde, for instance, one may
would have expected that some, at any rate, of observe picture after picture. A lowering sunset
her painters would be attracted by the pictorial sky, grey masts and rigging etched across its field;
effects to be obtained in Glasgow, and would have dull water; vast hulls of ships lying by the dock

sides ; a puff of steam from an
engine blown like a will-o'-the-wisp
athwart the dull, dun, sunset clouds ;
the jewel-like gleam of the red and
green lamps of the railway, poignant
amid the gathering gloom—here
are the elements of a picture, vast
possibilities in the hands of a capa-
ble artist; here is the picture, in
short, that one would expect to be
produced in Glasgow—great, grimy
city of the west—but that still
awaits its painter.

In fact, the influence of the city
may fairly be said to be not only
absent but negative, for the art ot
the Glasgow men in most instances
seems to bear traces of a direct
reaction from any such inspiration as
has been suggested above. Flowers,
landscapes, portraits, animals, genre
subjects; few ideal compositions,
but many subjects treated ideally
(and, as far as landscape is con-
cerned, from the point of view which
was expressed first of recent years
by the great French romanticists)—
such is the output, to use a com-
mercial term, of the Glasgow men.
And occupying a notable and in-
dividual place among these is
the subject of this article.
Macaulay Stevenson's work, as
will be seen from the illustra-
tions, is an outstanding example
of the revolt against the hard-
ness and gloom that charac-
plaquette by peter breithut terise the aspects of our greit