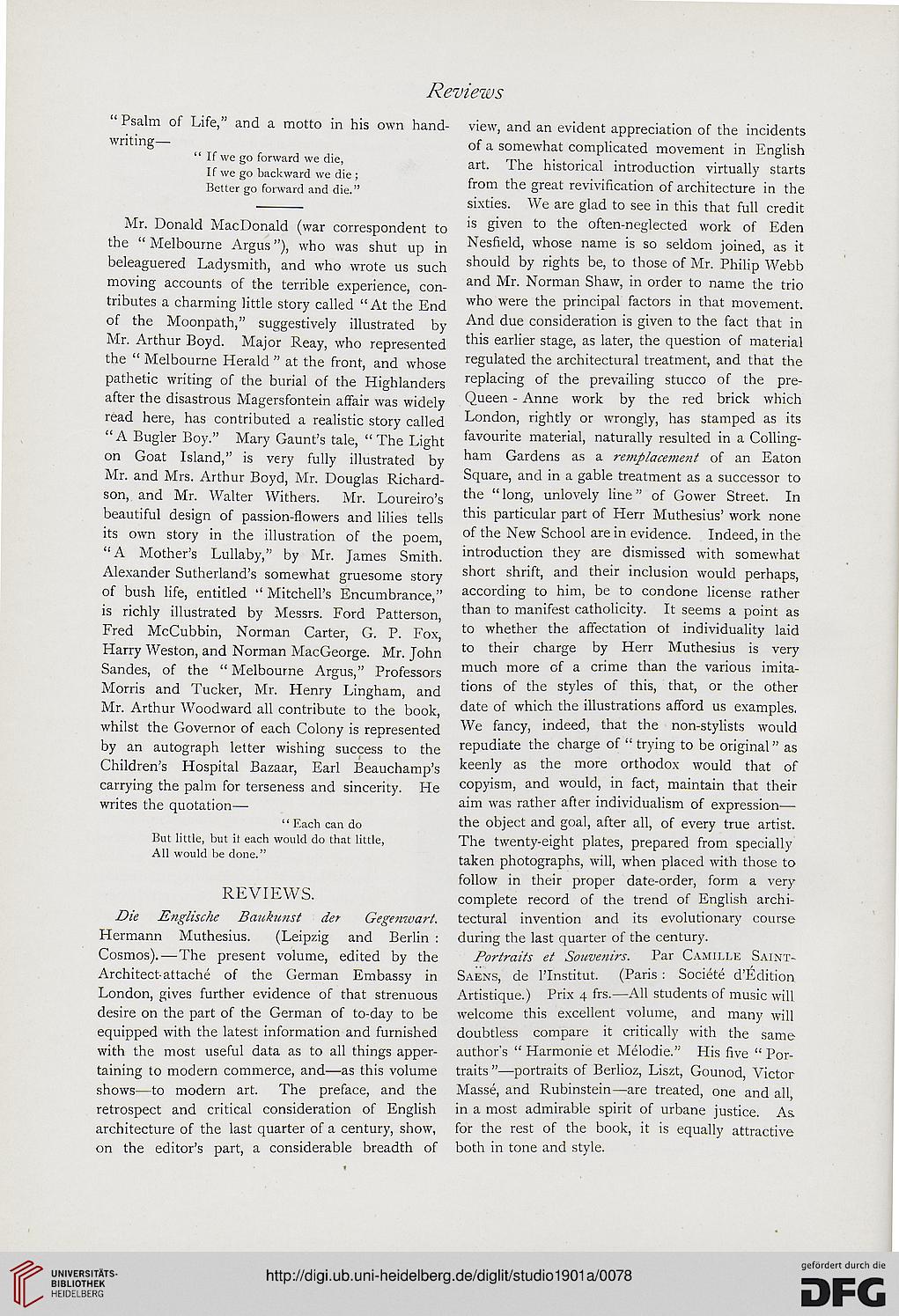 " Psalm of Life," and a motto in his own hand-
writing—

Mr. Donald MacDonald (war correspondent to
the "Melbourne Argus"), who was shut up in
beleaguered Ladysmith, and who wrote us such
moving accounts of the terrible experience, con-
tributes a charming little story called "At the End
of the Moonpath," suggestively illustrated by-
Mr. Arthur Boyd. Major Reay, who represented
the " Melbourne Herald " at the front, and whose
pathetic writing of the burial of the Highlanders
after the disastrous Magersfontein affair was widely
read here, has contributed a realistic story called
"A Bugler Boy." Mary Gaunt's tale, " The Light
on Goat Island," is very fully illustrated by
Mr. and Mrs. Arthur Boyd, Mr. Douglas Richard-
son, and Mr. Walter Withers. Mr. Loureiro's
beautiful design of passion-flowers and lilies tells
its own story in the illustration of the poem,
"A Mother's Lullaby," by Mr. James Smith.
Alexander Sutherland's somewhat gruesome story
of bush life, entitled '' Mitchell's Encumbrance,"
is richly illustrated by Messrs. Ford Patterson,
Fred McCubbin, Norman Carter, G. P. Fox,
Harry Weston, and Norman MacGeorge. Mr. John
Sandes, of the " Melbourne Argus," Professors
Morris and Tucker, Mr. Henry Lingham, and
Mr. Arthur Woodward all contribute to the book,
whilst the Governor of each Colony is represented
by an autograph letter wishing success to the
Children's Hospital Bazaar, Earl Beauchamp's
carrying the palm for terseness and sincerity. He
writes the quotation—

'' Each can do
But little, but it each would do that little,
All would be done."

REVIEWS.
Die Englische Baukunst det Gegenwart.
Hermann Muthesius. (Leipzig and Berlin :
Cosmos).—The present volume, edited by the
Architect attache of the German Embassy in
London, gives further evidence of that strenuous
desire on the part of the German of to-day to be
equipped with the latest information and furnished
with the most useful data as to all things apper-
taining to modern commerce, and—as this volume
shows—to modern art. The preface, and the
retrospect and critical consideration of English
architecture of the last quarter of a century, show,
on the editor's part, a considerable breadth of

view, and an evident appreciation of the incidents
of a somewhat complicated movement in English
art. The historical introduction virtually starts
from the great revivification of architecture in the
sixties. We are glad to see in this that full credit
is given to the often-neglected work of Eden
Nesfield, whose name is so seldom joined, as it
should by rights be, to those of Mr. Philip Webb
and Mr. Norman Shaw, in order to name the trio
who were the principal factors in that movement.
And due consideration is given to the fact that in
this earlier stage, as later, the question of material
regulated the architectural treatment, and that the
replacing of the prevailing stucco of the pre-
Queen - Anne work by the red brick which
London, rightly or wrongly, has stamped as its
favourite material, naturally resulted in a Colling-
ham Gardens as a remplacement of an Eaton
Square, and in a gable treatment as a successor to
the " long, unlovely line" of Gower Street. In
this particular part of Herr Muthesius' work none
of the New School are in evidence. Indeed, in the
introduction they are dismissed with somewhat
short shrift, and their inclusion would perhaps,
according to him, be to condone license rather
than to manifest catholicity. It seems a point as
to whether the affectation ot individuality laid
to their charge by Herr Muthesius is very
much more of a crime than the various imita-
tions of the styles of this, that, or the other
date of which the illustrations afford us examples.
We fancy, indeed, that the non-stylists would
repudiate the charge of " trying to be original" as
keenly as the more orthodox would that of
copyism, and would, in fact, maintain that their
aim was rather after individualism of expression—
the object and goal, after all, of every true artist.
The twenty-eight plates, prepared from specially
taken photographs, will, when placed with those to
follow in their proper date-order, form a very
complete record of the trend of English archi-
tectural invention and its evolutionary course
during the last quarter of the century.

Portraits et Souvenirs. Par Camili.k Saint-
Saens, de l'lnstitut. (Paris : Societe d'Edition
Artistique.) Prix 4 frs.—All students of music will
welcome this excellent volume, and many will
doubtless compare it critically with the same
author's " Harmonie et Melodie." His five " Por-
traits "—portraits of Berlioz, Liszt, Gounod, Victor
Masse, and Rubinstein—are treated, one and all,
in a most admirable spirit of urbane justice. As.
for the rest of the book, it is equally attractive
both in tone and style.