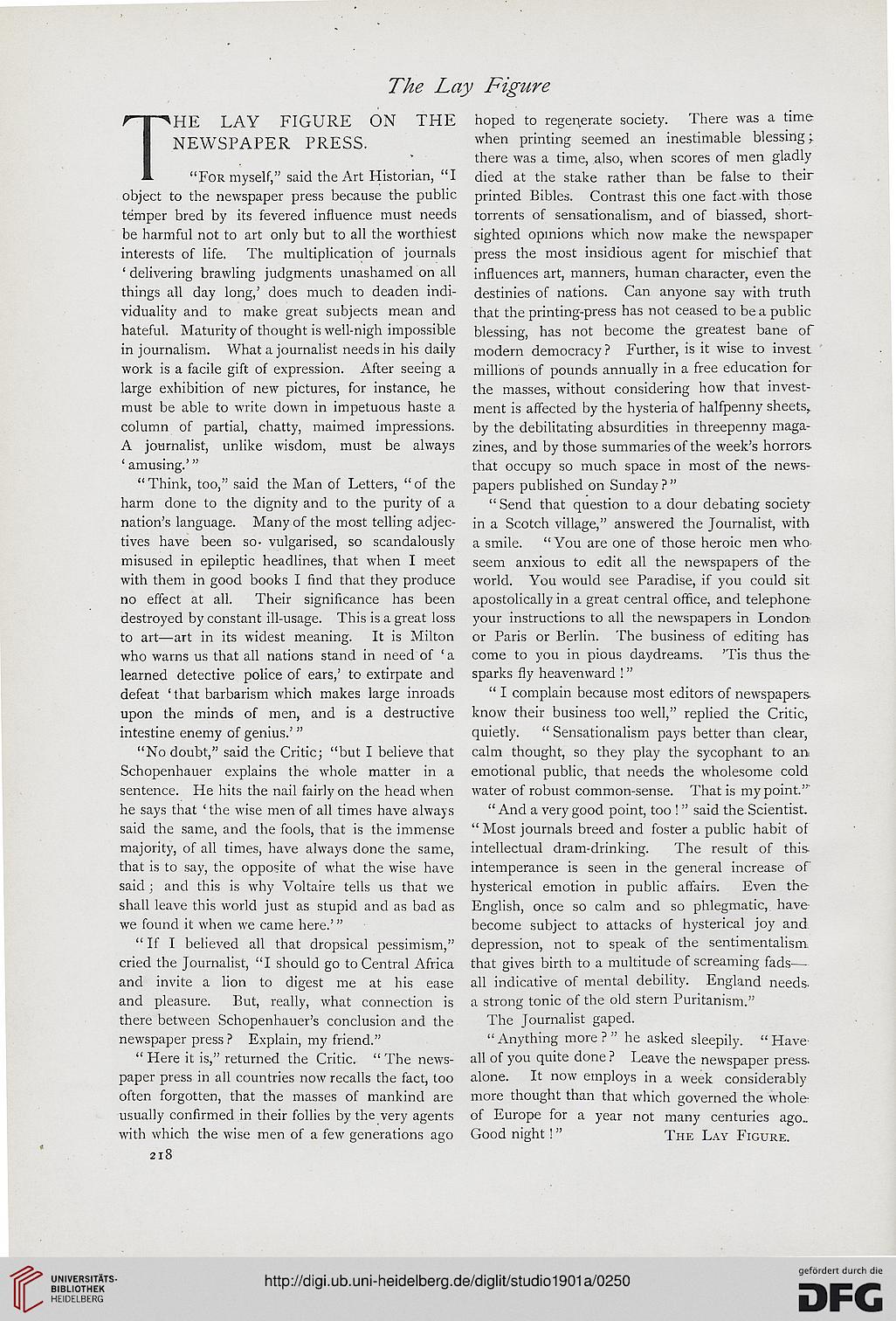 HE LAY FIGURE ON THE
NEWSPAPER PRESS.

"For myself," said the Art Historian, "I

object to the newspaper press because the public
temper bred by its fevered influence must needs
be harmful not to art only but to all the worthiest
interests of life. The multiplication of journals
' delivering brawling judgments unashamed on all
things all day long,' does much to deaden indi-
viduality and to make great subjects mean and
hateful. Maturity of thought is well-nigh impossible
in journalism. What a journalist needs in his daily
work is a facile gift of expression. After seeing a
large exhibition of new pictures, for instance, he
must be able to write down in impetuous haste a
column of partial, chatty, maimed impressions.
A journalist, unlike wisdom, must be always
' amusing.'"

"Think, too," said the Man of Letters, "of the
harm done to the dignity and to the purity of a
nation's language. Many of the most telling adjec-
tives have been so- vulgarised, so scandalously
misused in epileptic headlines, that when I meet
with them in good books I find that they produce
no effect at all. Their significance has been
destroyed by constant ill-usage. This is a great loss
to art—art in its widest meaning. It is Milton
who warns us that all nations stand in need of ' a
learned detective police of ears,' to extirpate and
defeat 'that barbarism which makes large inroads
upon the minds of men, and is a destructive
intestine enemy of genius.' "

"No doubt," said the Critic; "but I believe that
Schopenhauer explains the whole matter in a
sentence. He hits the nail fairly on the head when
he says that 'the wise men of all times have always
said the same, and the fools, that is the immense
majority, of all times, have always done the same,
that is to say, the opposite of what the wise have
said; and this is why A^oltaire tells us that we
shall leave this world just as stupid and as bad as
we found it when we came here.'"

" If I believed all that dropsical pessimism,"
cried the Journalist, "I should go to Central Africa
and invite a lion to digest me at his ease
and pleasure. But, really, what connection is
there between Schopenhauer's conclusion and the
newspaper press ? Explain, my friend."

" Here it is," returned the Critic. " The news-
paper press in all countries now recalls the fact, too
often forgotten, that the masses of mankind are
usually confirmed in their follies by the very agents
with which the wise men of a few generations ago

hoped to regenerate society. There was a time
when printing seemed an inestimable blessing;
there was a time, also, when scores of men gladly
died at the stake rather than be false to their
printed Bibles. Contrast this one fact with those
torrents of sensationalism, and of biassed, short-
sighted opinions which now make the newspaper
press the most insidious agent for mischief that
influences art, manners, human character, even the
destinies of nations. Can anyone say with truth
that the printing-press has not ceased to be a public
blessing, has not become the greatest bane of
modern democracy ? Further, is it wise to invest
millions of pounds annually in a free education for
the masses, without considering how that invest-
ment is affected by the hysteria of halfpenny sheets,
by the debilitating absurdities in threepenny maga-
zines, and by those summaries of the week's horrors.
that occupy so much space in most of the news-
papers published on Sunday ? "

" Send that question to a dour debating society
in a Scotch village," answered the Journalist, with
a smile. "You are one of those heroic men who
seem anxious to edit all the newspapers of the
world. You would see Paradise, if you could sit
apostolically in a great central office, and telephone
your instructions to all the newspapers in London
or Paris or Berlin. The business of editing has
come to you in pious daydreams. 'Tis thus the
sparks fly heavenward ! "

" I complain because most editors of newspapers,
know their business too well," replied the Critic,
quietly. " Sensationalism pays better than clear,
calm thought, so they play the sycophant to an
emotional public, that needs the wholesome cold
water of robust common-sense. That is my point."

" And a very good point, too ! " said the Scientist.
" Most journals breed and foster a public habit of
intellectual dram-drinking. The result of this
intemperance is seen in the general increase of
hysterical emotion in public affairs. Even the
English, once so calm and so phlegmatic, have
become subject to attacks of hysterical joy and.
depression, not to speak of the sentimentalism.
that gives birth to a multitude of screaming fads—
all indicative of mental debility. England needs,
a strong tonic of the old stern Puritanism."

" Anything more ? " he asked sleepily. " Have
all of you quite done ? Leave the newspaper press,
alone. It now employs in a week considerably
more thought than that which governed the whole
of Europe for a year not many centuries ago.
Good night !" The Lay Figure.