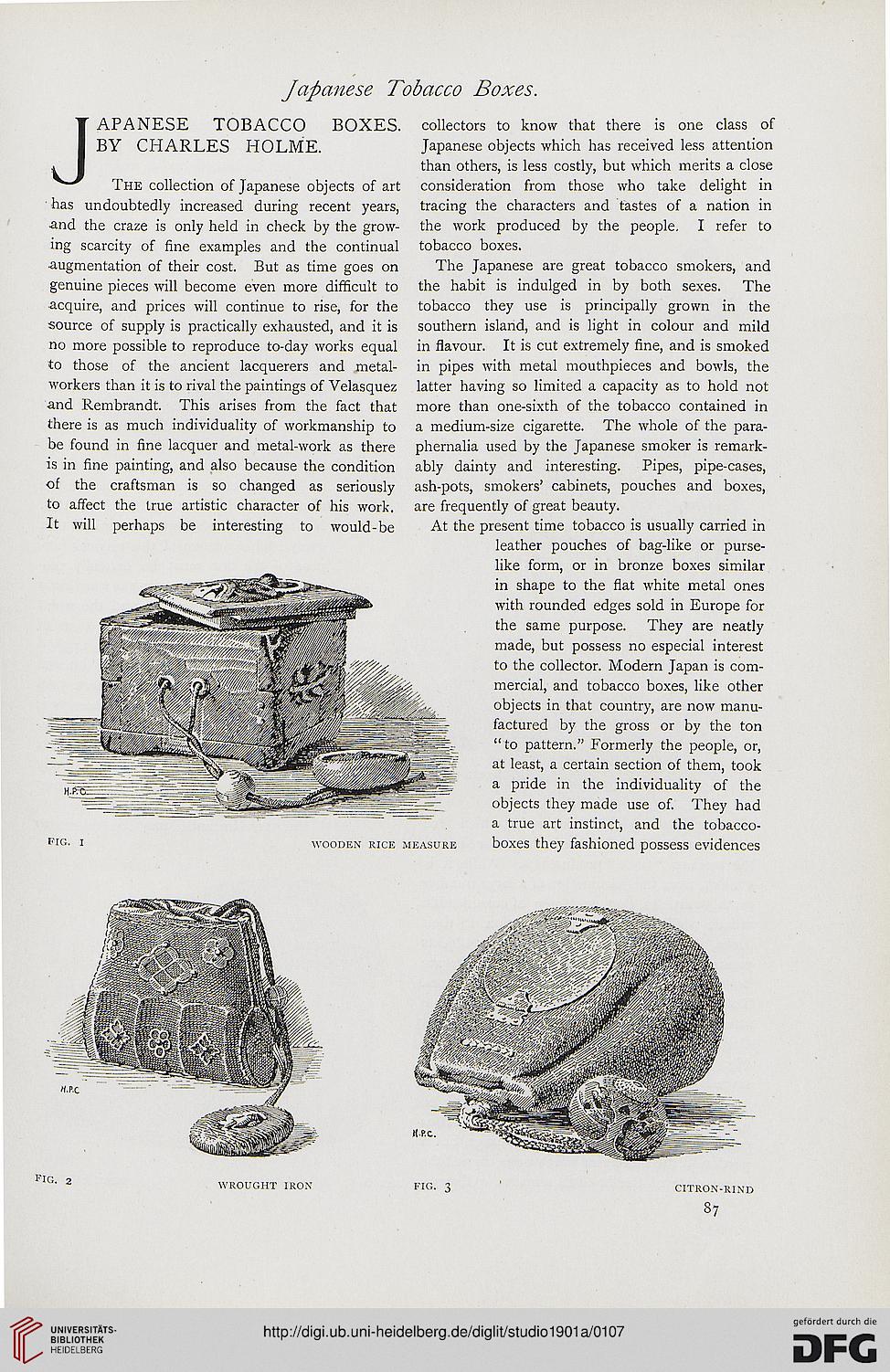 JAPANESE TOBACCO BOXES, collectors to know that there is one class of
BY CHARLES HOLME. Japanese objects which has received less attention

than others, is less costly, but which merits a close
The collection of Japanese objects of art consideration from those who take delight in
has undoubtedly increased during recent years, tracing the characters and tastes of a nation in
and the craze is only held in check by the grow- the work produced by the people. I refer to
ing scarcity of fine examples and the continual tobacco boxes.

•augmentation of their cost. But as time goes on The Japanese are great tobacco smokers, and
genuine pieces will become even more difficult to the habit is indulged in by both sexes. The
acquire, and prices will continue to rise, for the tobacco they use is principally grown in the
source of supply is practically exhausted, and it is southern island, and is light in colour and mild
no more possible to reproduce to-day works equal in flavour. It is cut extremely fine, and is smoked
to those of the ancient lacquerers and metal- in pipes with metal mouthpieces and bowls, the
workers than it is to rival the paintings of Velasquez latter having so limited a capacity as to hold not
and Rembrandt. This arises from the fact that more than one-sixth of the tobacco contained in
there is as much individuality of workmanship to a medium-size cigarette. The whole of the para-
be found in fine lacquer and metal-work as there phernalia used by the Japanese smoker is remark-
is in fine painting, and also because the condition ably dainty and interesting. Pipes, pipe-cases,
of the craftsman is so changed as seriously ash-pots, smokers' cabinets, pouches and boxes,
to affect the true artistic character of his work, are frequently of great beauty.
It will perhaps be interesting to would-be At the present time tobacco is usually carried in

leather pouches of bag-like or purse-
like form, or in bronze boxes similar
in shape to the flat white metal ones
with rounded edges sold in Europe for
the same purpose. They are neatly
made, but possess no especial interest
to the collector. Modern Japan is com-
mercial, and tobacco boxes, like other
objects in that country, are now manu-
factured by the gross or by the ton
" to pattern." Formerly the people, or,
at least, a certain section of them, took
a pride in the individuality of the
objects they made use of. They had
a true art instinct, and the tobacco-
3- i wooden rice measure boxes they fashioned possess evidences