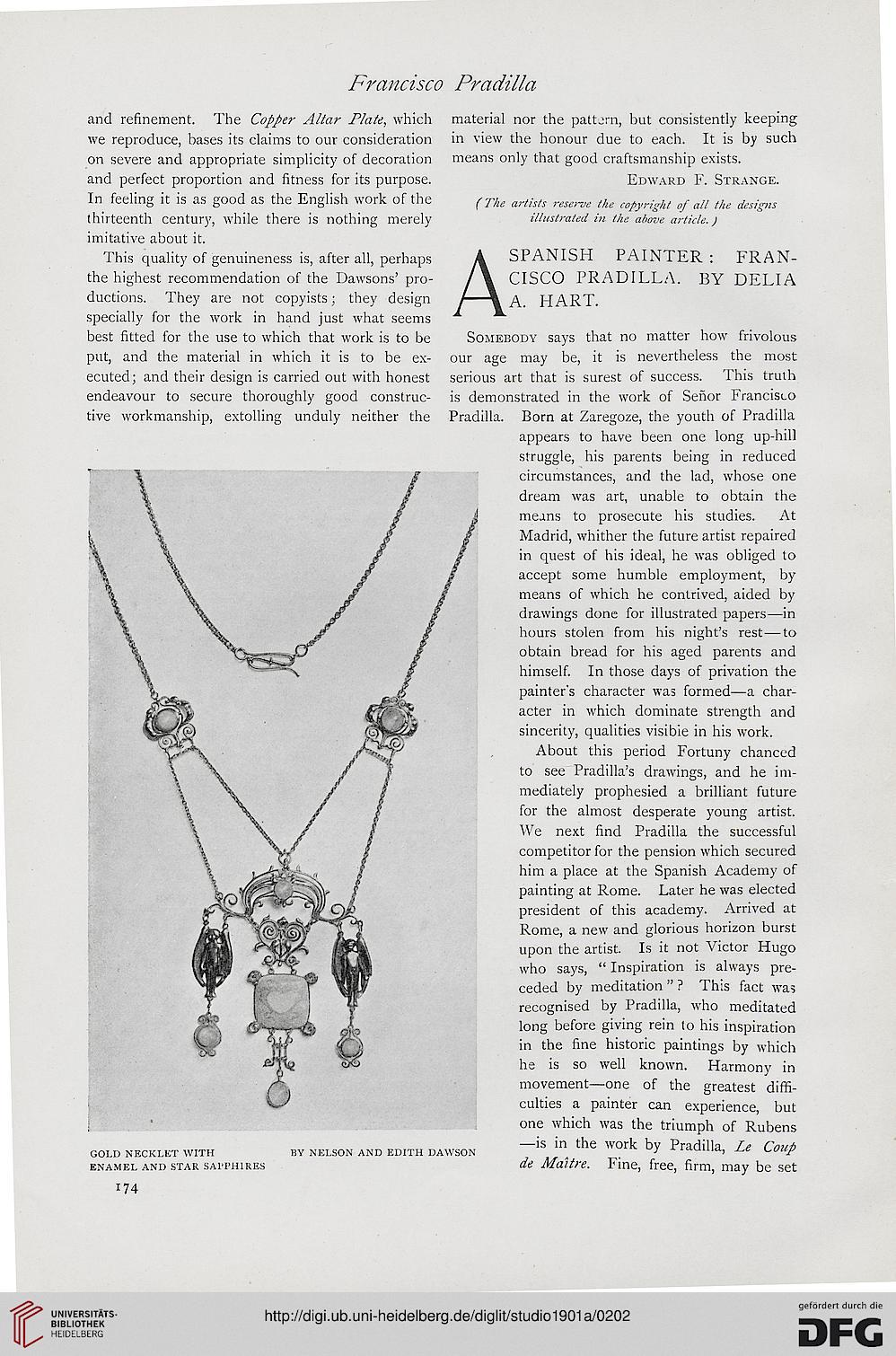 and refinement. The Copper Altar Plate, which material nor the pattern, but consistently keeping
we reproduce, bases its claims to our consideration in view the honour due to each. It is by such
on severe and appropriate simplicity of decoration means only that good craftsmanship exists,
and perfect proportion and fitness for its purpose. Edward F. Strange.

In feeling it is as good as the English work of the (The artists reserve tie copyrigkt of M the designs
thirteenth century, while there is nothing merely illustrated in the above article.)

This quality of genuineness is, after all, perhaps A SPANISH PAINTER: FRAN-
the highest recommendation of the Dawsons' pro- /\ CISCO PRADILLA. BY DELIA
ductions. They are not copyists; they design h—\ A HART,
specially for the work in hand just what seems

best fitted for the use to which that work is to be Somebody says that no matter how frivolous
put, and the material in which it is to be ex- our age may be, it is nevertheless the most
ecuted; and their design is carried out with honest serious art that is surest of success. This truth
endeavour to secure thoroughly good construe- is demonstrated in the work of Senor Francisco
tive workmanship, extolling unduly neither the Pradilla. Born at Zaregoze, the youth of Pradilla

appears to have been one long up-hill
struggle, his parents being in reduced
circumstances, and the lad, whose one
dream was art, unable to obtain the
means to prosecute his studies. At
Madrid, whither the future artist repaired
in quest of his ideal, he was obliged to
accept some humble employment, by
means of which he contrived, aided by
drawings done for illustrated papers—in
hours stolen from his night's rest — to
obtain bread for his aged parents and
himself. In those days of privation the
painters character was formed—a char-
acter in which dominate strength and
sincerity, qualities visible in his work.

About this period Fortuny chanced
to see Pradilla's drawings, and he im-
mediately prophesied a brilliant future
for the almost desperate young artist.
We next find Pradilla the successful
competitor for the pension which secured
him a place at the Spanish Academy of
painting at Rome. Later he was elected
president of this academy. Arrived at
Rome, a new and glorious horizon burst
upon the artist. Is it not Victor Hugo
who says, " Inspiration is always pre-
ceded by meditation " ? This fact was
recognised by Pradilla, who meditated
long before giving rein to his inspiration
in the fine historic paintings by which
he is so well known. Harmony in
movement—one of the greatest diffi-
culties a painter can experience, but
one which was the triumph of Rubens
—is in the work by Pradilla Fe Cout>