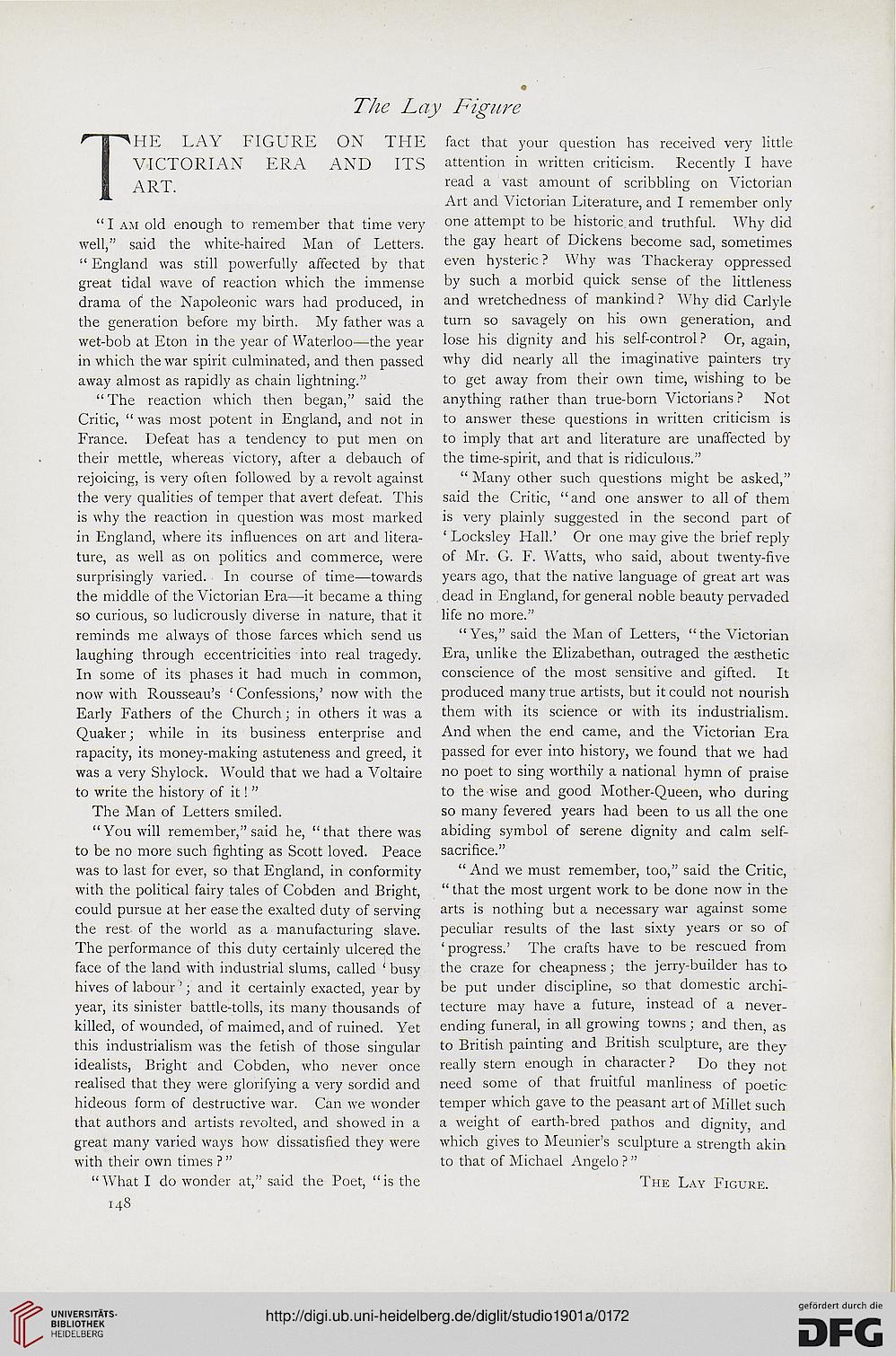 THE LAY FIGURE ON THE
VJCTORIAN ERA AND ITS
ART.

" I am old enough to remember that time very
well," said the white-haired Man of Letters.
" England was still powerfully affected by that
great tidal wave of reaction which the immense
drama of the Napoleonic wars had produced, in
the generation before my birth. My father was a
wet-bob at Eton in the year of Waterloo—the year
in which the war spirit culminated, and then passed
away almost as rapidly as chain lightning."

" The reaction which then began," said the
Critic, " was most potent in England, and not in
France. Defeat has a tendency to put men on
their mettle, whereas victory, after a debauch of
rejoicing, is very often followed by a revolt against
the very qualities of temper that avert defeat. This
is why the reaction in question was most marked
in England, where its influences on art and litera-
ture, as well as on politics and commerce, were
surprisingly varied. In course of time—towards
the middle of the Victorian Era—it became a thing
so curious, so ludicrously diverse in nature, that it
reminds me always of those farces which send us
laughing through eccentricities into real tragedy.
In some of its phases it had much in common,
now with Rousseau's 'Confessions,' now with the
Early Fathers of the Church; in others it was a
Quaker; while in its business enterprise and
rapacity, its money-making astuteness and greed, it
was a very Shylock. Would that we had a Voltaire
to write the history of it! "

The Man of Letters smiled.

" You will remember," said he, " that there was
to be no more such fighting as Scott loved. Peace
was to last for ever, so that England, in conformity
with the political fairy tales of Cobden and Bright,
could pursue at her ease the exalted duty of serving
the rest of the world as a manufacturing slave.
The performance of this duty certainly ulcered the
face of the land with industrial slums, called ' busy
hives of labour '; and it certainly exacted, year by
year, its sinister battle-tolls, its many thousands of
killed, of wounded, of maimed, and of ruined. Yet
this industrialism was the fetish of those singular
idealists, Bright and Cobden, who never once
realised that they were glorifying a very sordid and
hideous form of destructive war. Can we wonder
that authors and artists revolted, and showed in a
great many varied ways how dissatisfied they were
with their own times ? "

fact that your question has received very little
attention in written criticism. Recently I have
read a vast amount of scribbling on Victorian
Art and Victorian Literature, and I remember only
one attempt to be historic and truthful. Why did
the gay heart of Dickens become sad, sometimes
even hysteric ? Why was Thackeray oppressed
by such a morbid quick sense of the littleness
and wretchedness of mankind ? Why did Carlyle
turn so savagely on his own generation, and
lose his dignity and his self-control ? Or, again,
why did nearly all the imaginative painters try
to get away from their own time, wishing to be
anything rather than true-born Victorians? Not
to answer these questions in written criticism is
to imply that art and literature are unaffected by
the time-spirit, and that is ridiculous."

" Many other such questions might be asked,"
said the Critic, "and one answer to all of them
is very plainly suggested in the second part of
' Locksley Hall' Or one may give the brief reply
of Mr. G. F. Watts, who said, about twenty-five
years ago, that the native language of great art was
dead in England, for general noble beauty pervaded
life no more."

"Yes," said the Man of Letters, "the Victorian
Era, unlike the Elizabethan, outraged the esthetic
conscience of the most sensitive and gifted. It
produced many true artists, but it could not nourish
them with its science or with its industrialism.
And when the end came, and the Victorian Era
passed for ever into history, we found that we had
no poet to sing worthily a national hymn of praise
to the wise and good Mother-Queen, who during
so many fevered years had been to us all the one
abiding symbol of serene dignity and calm self-
sacrifice."

"And we must remember, too," said the Critic,
" that the most urgent work to be done now in the
arts is nothing but a necessary war against some
peculiar results of the last sixty years or so of
'progress.' The crafts have to be rescued from
the craze for cheapness ; the jerry-builder has to
be put under discipline, so that domestic archi-
tecture may have a future, instead of a never-
ending funeral, in all growing towns ; and then, as
to British painting and British sculpture, are they
really stern enough in character? Do they not
need some of that fruitful manliness of poetic
temper which gave to the peasant art of Millet such
a weight of earth-bred pathos and dignity, and
which gives to Meunier's sculpture a strength akin
to that of Michael Angelo ? "