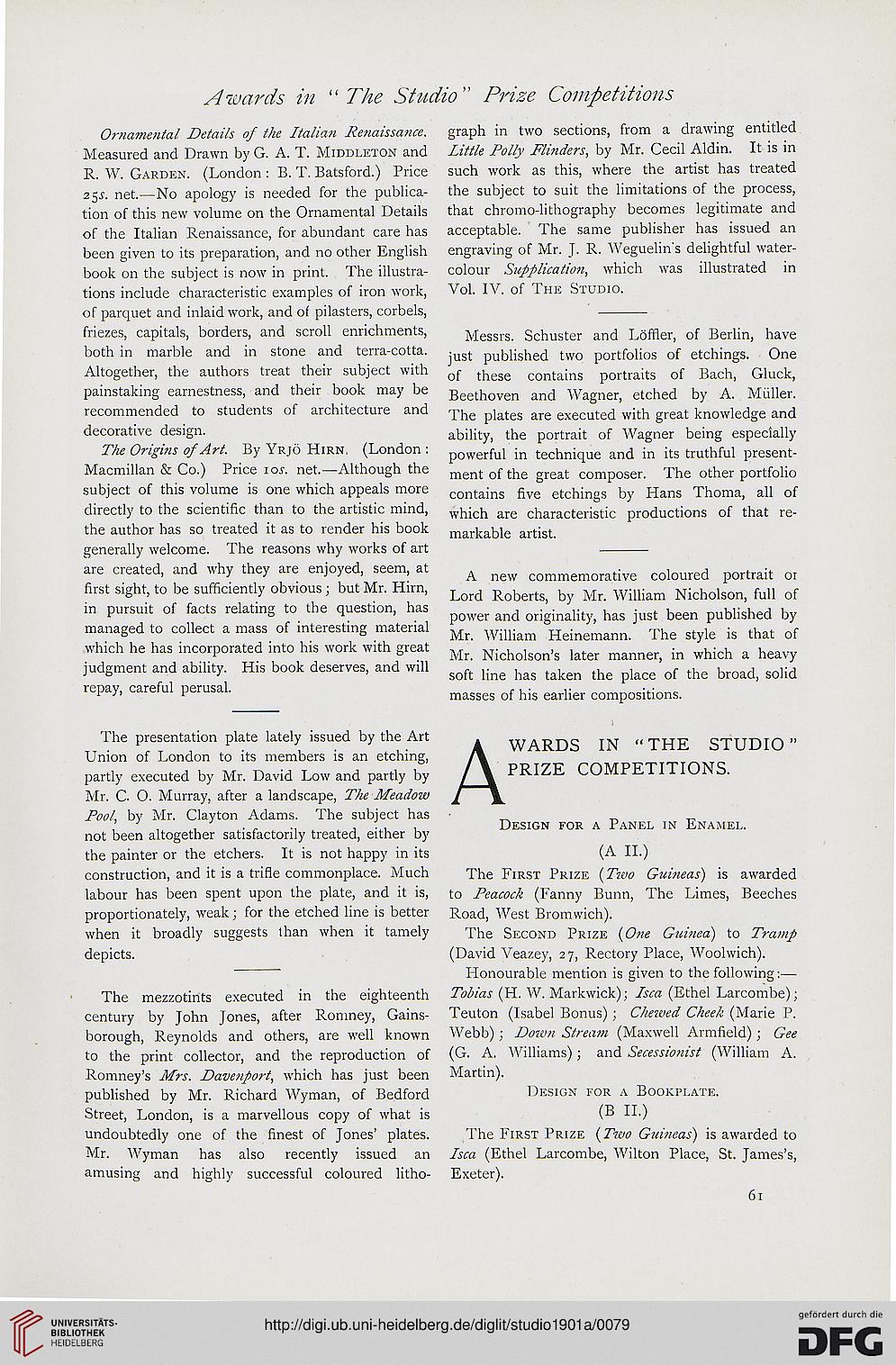 Ornamental Details of the Italian Renaissance.
Measured and Drawn by G. A. T. Middleton and
R. W. Garden. (London : B. T. Batsford.) Price
25^. net.—No apology is needed for the publica-
tion of this new volume on the Ornamental Details
of the Italian Renaissance, for abundant care has
been given to its preparation, and no other English
book on the subject is now in print. The illustra-
tions include characteristic examples of iron work,
of parquet and inlaid work, and of pilasters, corbels,
friezes, capitals, borders, and scroll enrichments,
both in marble and in stone and terra-cotta.
Altogether, the authors treat their subject with
painstaking earnestness, and their book may be
recommended to students of architecture and
decorative design.

The Origins of Art. By Yrjo Hirn, (London :
Macmillan & Co.) Price 10s. net.—Although the
subject of this volume is one which appeals more
directly to the scientific than to the artistic mind,
the author has so treated it as to render his book
generally welcome. The reasons why works of art
are created, and why they are enjoyed, seem, at
first sight, to be sufficiently obvious ; but Mr. Hirn,
in pursuit of facts relating to the question, has
managed to collect a mass of interesting material
which he has incorporated into his work with great
judgment and ability. His book deserves, and will
repay, careful perusal.

The presentation plate lately issued by the Art
Union of London to its members is an etching,
partly executed by Mr. David Low and partly by
Mr. C. O. Murray, after a landscape, Tlie Meadow
Pool, by Mr. Clayton Adams. The subject has
not been altogether satisfactorily treated, either by
the painter or the etchers. It is not happy in its
construction, and it is a trifle commonplace. Much
labour has been spent upon the plate, and it is,
proportionately, weak; for the etched line is better
when it broadly suggests than when it tamely
depicts.

The mezzotints executed in the eighteenth
century by John Jones, after Romney, Gains-
borough, Reynolds and others, are well known
to the print collector, and the reproduction of
Romney's Mrs. Davenport, which has just been
published by Mr. Richard Wyman, of Bedford
Street, London, is a marvellous copy of what is
undoubtedly one of the finest of Jones' plates.
Mr. Wyman has also recently issued an
amusing and highly successful coloured litho-

graph in two sections, from a drawing entitled
Little Polly Flinders, by Mr. Cecil Aldin. It is in
such work as this, where the artist has treated
the subject to suit the limitations of the process,
that chromo-lithography becomes legitimate and
acceptable. The same publisher has issued an
engraving of Mr. J. R. Weguelin's delightful water-
colour Supplication, which was illustrated in
Vol. IV. of The Studio.

Messrs. Schuster and Loffler, of Berlin, have
just published two portfolios of etchings. One
of these contains portraits of Bach, Gluck,
Beethoven and Wagner, etched by A. Midler.
The plates are executed with great knowledge and
ability, the portrait of Wagner being especially
powerful in technique and in its truthful present-
ment of the great composer. The other portfolio
contains five etchings by Hans Thoma, all of
which are characteristic productions of that re-
markable artist.

A new commemorative coloured portrait 01
Lord Roberts, by Mr. William Nicholson, full of
power and originality, has just been published by
Mr. William Heinemann. The style is that of
Mr. Nicholson's later manner, in which a heavy
soft line has taken the place of the broad, solid
masses of his earlier compositions.

AWARDS IN "THE STUDIO"
PRIZE COMPETITIONS.

Design for a Panel in Enamel.
(A II.)

Design for a Bookplate.
(B II.)