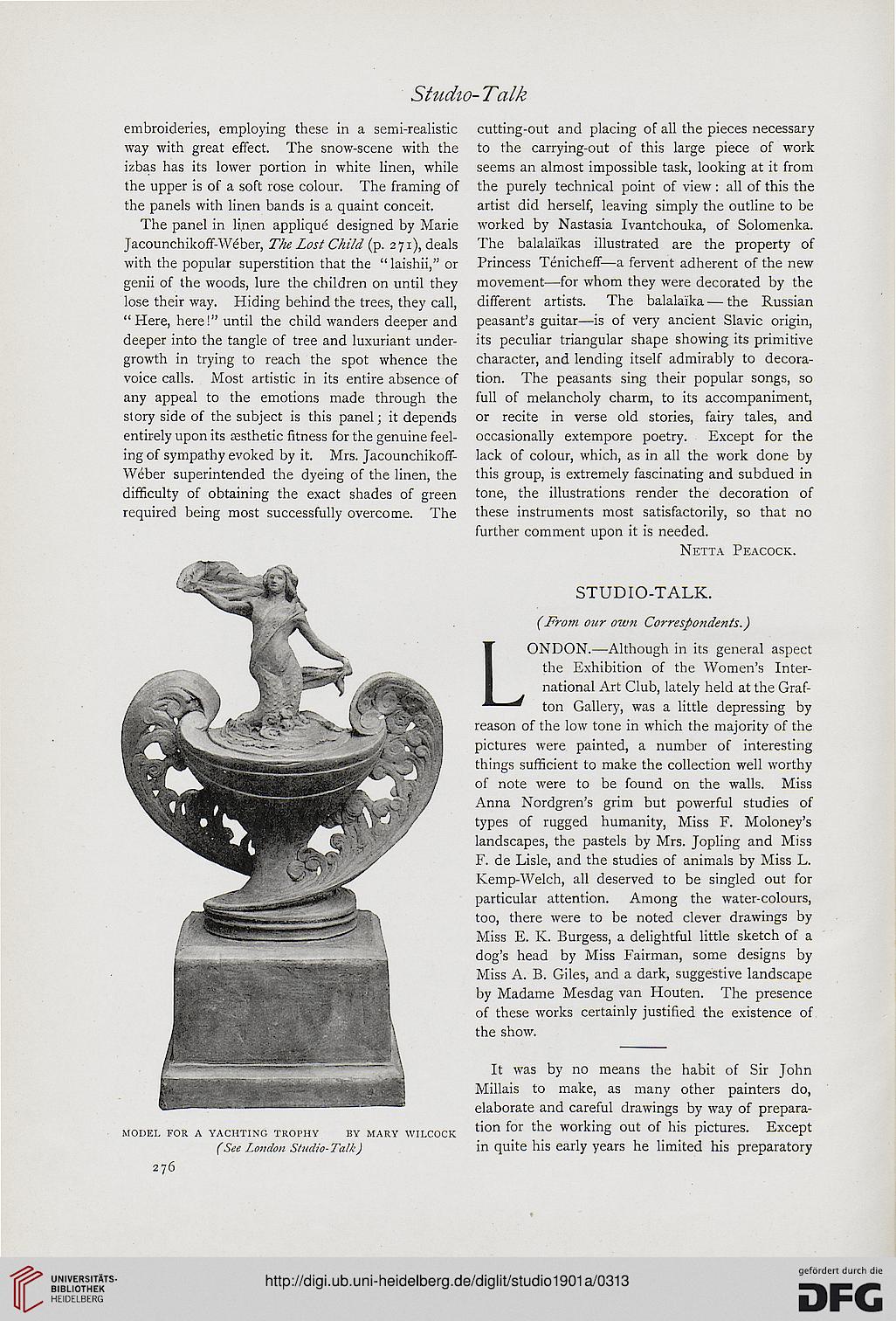 embroideries, employing these in a semi-realistic
way with great effect. The snow-scene with the
izbas has its lower portion in white linen, while
the upper is of a soft rose colour. The framing of
the panels with linen bands is a quaint conceit.

The panel in linen applique designed by Marie
Jacounchikoff-Weber, The LostChild (p. 271), deals
with the popular superstition that the "laishii," or
genii of the woods, lure the children on until they
lose their way. Hiding behind the trees, they call,
"Here, here!" until the child wanders deeper and
deeper into the tangle of tree and luxuriant under-
growth in trying to reach the spot whence the
voice calls. Most artistic in its entire absence of
any appeal to the emotions made through the
story side of the subject is this panel; it depends
entirely upon its aesthetic fitness for the genuine feel-
ing of sympathy evoked by it. Mrs. Jacounchikoff-
Weber superintended the dyeing of the linen, the
difficulty of obtaining the exact shades of green
required being most successfully overcome. The

cutting-out and placing of all the pieces necessary
to the carrying-out of this large piece of work
seems an almost impossible task, looking at it from
the purely technical point of view: all of this the
artist did herself, leaving simply the outline to be
worked by Nastasia Ivantchouka, of Solomenka.
The balalaikas illustrated are the property of
Princess Tenicheff—a fervent adherent of the new
movement—for whom they were decorated by the
different artists. The balalaika—the Russian
peasant's guitar—is of very ancient Slavic origin,
its peculiar triangular shape showing its primitive
character, and lending itself admirably to decora-
tion. The peasants sing their popular songs, so
full of melancholy charm, to its accompaniment,
or recite in verse old stories, fairy tales, and
occasionally extempore poetry. Except for the
lack of colour, which, as in all the work done by
this group, is extremely fascinating and subdued in
tone, the illustrations render the decoration of
these instruments most satisfactorily, so that no
further comment upon it is needed.

LONDON.—Although in its general aspect
the Exhibition of the Women's Inter-
national Art Club, lately held at the Graf-
ton Gallery, was a little depressing by
reason of the low tone in which the majority of the
pictures were painted, a number of interesting
things sufficient to make the collection well worthy
of note were to be found on the walls. Miss
Anna Nordgren's grim but powerful studies of
types of rugged humanity, Miss F. Moloney's
landscapes, the pastels by Mrs. Jopling and Miss
F. de Lisle, and the studies of animals by Miss L.
Kemp-Welch, all deserved to be singled out for
particular attention. Among the water-colours,
too, there were to be noted clever drawings by
Miss E. K. Burgess, a delightful little sketch of a
dog's head by Miss Fairman, some designs by
Miss A. B. Giles, and a dark, suggestive landscape
by Madame Mesdag van Houten. The presence
of these works certainly justified the existence of
the show.

It was by no means the habit of Sir John
Millais to make, as many other painters do,
elaborate and careful drawings by way of prepara-
tion for the working out of his pictures. Except
in quite his early years he limited his preparatory