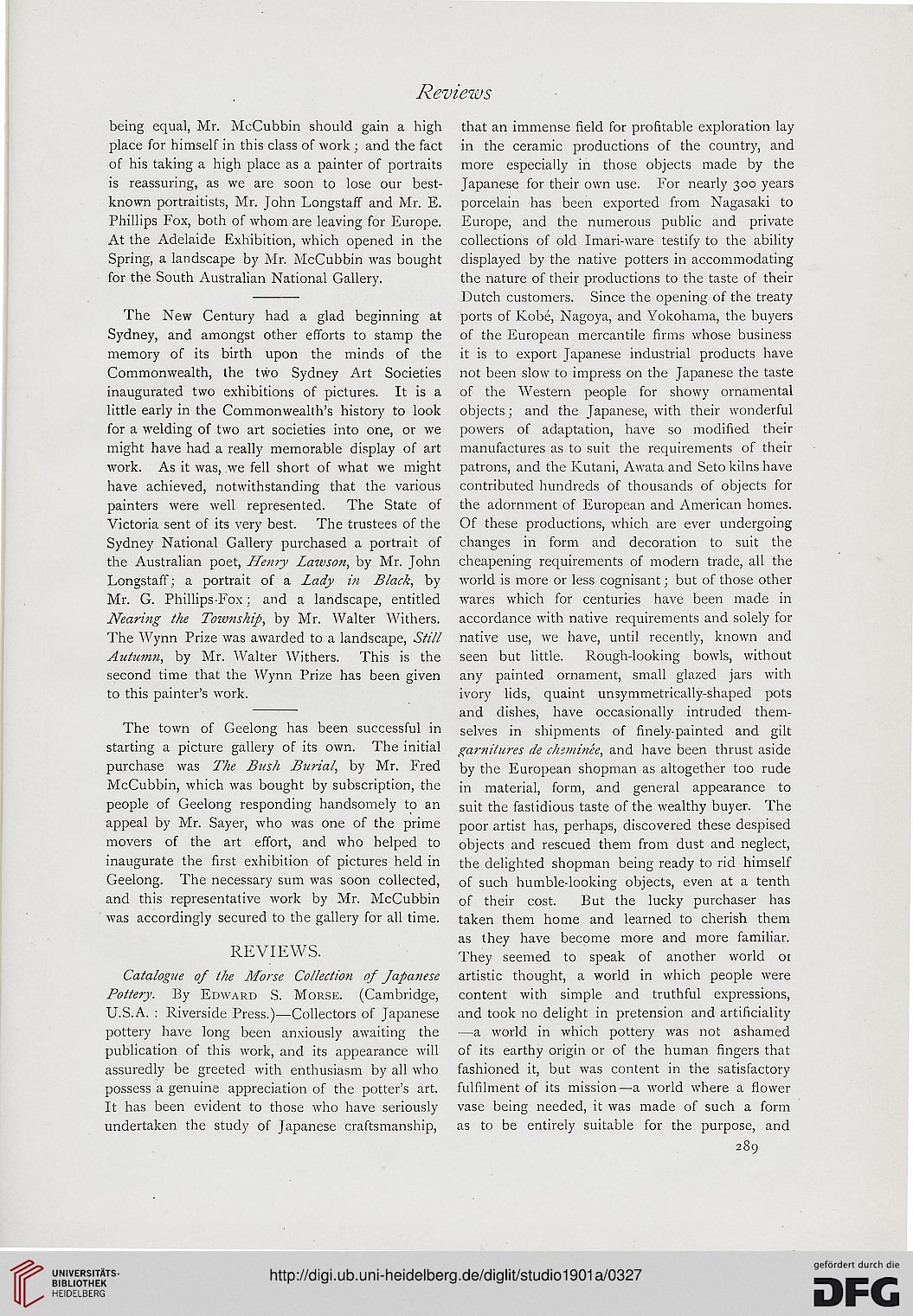 being equal, Mr. McCubbin should gain a high
place for himself in this class of work ; and the fact
of his taking a high place as a painter of portraits
is reassuring, as we are soon to lose our best-
known portraitists, Mr. John Longstaff and Mr. E.
Phillips Fox, both of whom are leaving for Europe.
At the Adelaide Exhibition, which opened in the
Spring, a landscape by Mr. McCubbin was bought
for the South Australian National Gallery.

The New Century had a glad beginning at
Sydney, and amongst other efforts to stamp the
memory of its birth upon the minds of the
Commonwealth, the two Sydney Art Societies
inaugurated two exhibitions of pictures. It is a
little early in the Commonwealth's history to look
for a welding of two art societies into one, or we
might have had a really memorable display of art
work. As it was, .we fell short of what we might
have achieved, notwithstanding that the various
painters were well represented. The State of
Victoria sent of its very best. The trustees of the
Sydney National Gallery purchased a portrait of
the Australian poet, Henry Lawson, by Mr. John
Longstaff; a portrait of a Lady in Black, by
Mr. G. Phillips-Fox ; and a landscape, entitled
Nearing the Township, by Mr. Walter Withers.
The Wynn Prize was awarded to a landscape, Still
Autumn, by Mr. Walter Withers. This is the
second time that the Wynn Prize has been given
to this painter's work.

The town of Geelong has been successful in
starting a picture gallery of its own. The initial
purchase was The Bush Burial, by Mr. Fred
McCubbin, which was bought by subscription, the
people of Geelong responding handsomely to an
appeal by Mr. Sayer, who was one of the prime
movers of the art effort, and who helped to
inaugurate the first exhibition of pictures held in
Geelong. The necessary sum was soon collected,
and this representative work by Mr. McCubbin
was accordingly secured to the gallery for all time.

Catalogue of the Morse Collection of Japanese
Pottery. By Edward S. Morse. (Cambridge,
U.S.A. : Riverside Press.)—Collectors of Japanese
pottery have long been anxiously awaiting the
publication of this work, and its appearance will
assuredly be greeted with enthusiasm by all who
possess a genuine appreciation of the potter's art.
It has been evident to those who have seriously
undertaken the study of Japanese craftsmanship,

that an immense field for profitable exploration lay
in the ceramic productions of the country, and
more especially in those objects made by the
Japanese for their own use. For nearly 300 years
porcelain has been exported from Nagasaki to
Europe, and the numerous public and private
collections of old Imari-ware testify to the ability
displayed by the native potters in accommodating
the nature of their productions to the taste of their
Dutch customers. Since the opening of the treaty
ports of Kobe, Nagoya, and Yokohama, the buyers
of the European mercantile firms whose business
it is to export Japanese industrial products have
not been slow to impress on the Japanese the taste
of the Western people for showy ornamental
objects; and the Japanese, with their wonderful
powers of adaptation, have so modified their
manufactures as to suit the requirements of their
patrons, and the Kutani, Awata and Seto kilns have
contributed hundreds of thousands of objects for
the adornment of European and American homes.
Of these productions, which are ever undergoing
changes in form and decoration to suit the
cheapening requirements of modern trade, all the
world is more or less cognisant; but of those other
wares which for centuries have been made in
accordance with native requirements and solely for
native use, we have, until recently, known and
seen but little. Rough-looking bowls, without
any painted ornament, small glazed jars with
ivory lids, quaint unsymmetrically-shaped pots
and dishes, have occasionally intruded them-
selves in shipments of finely-painted and gilt
garnitures de chstninie, and have been thrust aside
by the European shopman as altogether too rude
in material, form, and general appearance to
suit the fastidious taste of the wealthy buyer. The
poor artist has, perhaps, discovered these despised
objects and rescued them from dust and neglect,
the delighted shopman being ready to rid himself
of such humble-looking objects, even at a tenth
of their cost. But the lucky purchaser has
taken them home and learned to cherish them
as they have become more and more familiar.
They seemed to speak of another world or
artistic thought, a world in which people were
content with simple and truthful expressions,
and took no delight in pretension and artificiality
—a world in which pottery was not ashamed
of its earthy origin or of the human fingers that
fashioned it, but was content in the satisfactory
fulfilment of its mission—a world where a flower
vase being needed, it was made of such a form
as to be entirely suitable for the purpose, and