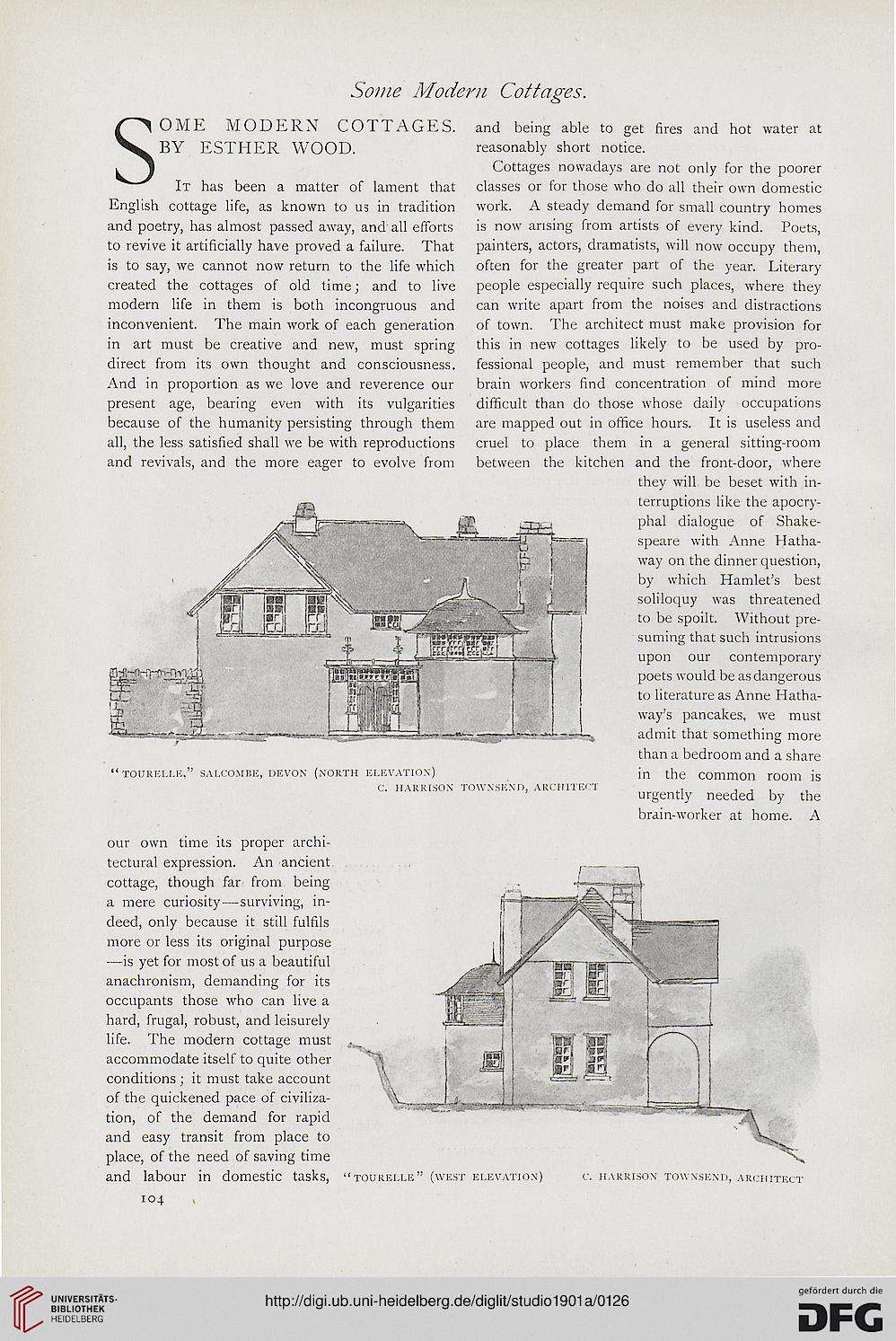 SOME MODERN COTTAGES, and being able to get fires and hot water at
BY ESTHER WOOD. reasonably short notice.

Cottages nowadays are not only for the poorer
It has been a matter of lament that classes or for those who do all their own domestic
English cottage life, as known to us in tradition work. A steady demand for small country homes
and poetry, has almost passed away, and all efforts is now arising from artists of every kind. Poets,
to revive it artificially have proved a failure. That painters, actors, dramatists, will now occupy them,
is to say, we cannot now return to the life which often for the greater part of the year. Literary
created the cottages of old time; and to live people especially require such places, where they
modern life in them is both incongruous and can write apart from the noises and distractions
inconvenient. The main work of each generation of town. The architect must make provision for
in art must be creative and new, must spring this in new cottages likely to be used by pro-
direct from its own thought and consciousness, fessional people, and must remember that such
And in proportion as we love and reverence our brain workers find concentration of mind more
present age, bearing even with its vulgarities difficult than do those whose daily occupations
because of the humanity persisting through them are mapped out in office hours. It is useless and
all, the less satisfied shall we be with reproductions cruel to place them in a general sitting-room
and revivals, and the more eager to evolve from between the kitchen and the front-door, where

they will be beset with in-
terruptions like the apocry-
phal dialogue of Shake-
speare with Anne Hatha-
way on the dinner question,
by which Hamlet's best
soliloquy was threatened
to be spoilt. Without pre-
suming that such intrusions
upon our contemporary

- ——3 admit that something more
than a bedroom and a share

salcombe, devon (north elevation) in the common room is

urgently needed by the
brain-worker at home. A

our own time its proper archi-
tectural expression. An ancient,
cottage, though far from being
a mere curiosity—surviving, in-
deed, only because it still fulfils
more or less its original purpose
—is yet for most of us a beautiful
anachronism, demanding for its
occupants those who can live a
hard, frugal, robust, and leisurely
life. The modern cottage must -
accommodate itself to quite other
conditions ; it must take account
of the quickened pace of civiliza-
tion, of the demand for rapid
and easy transit from place to
place, of the need of saving time
and labour in domestic tasks, "tourelle" (west elevation) c. Harrison1 townsend, architect
104 t