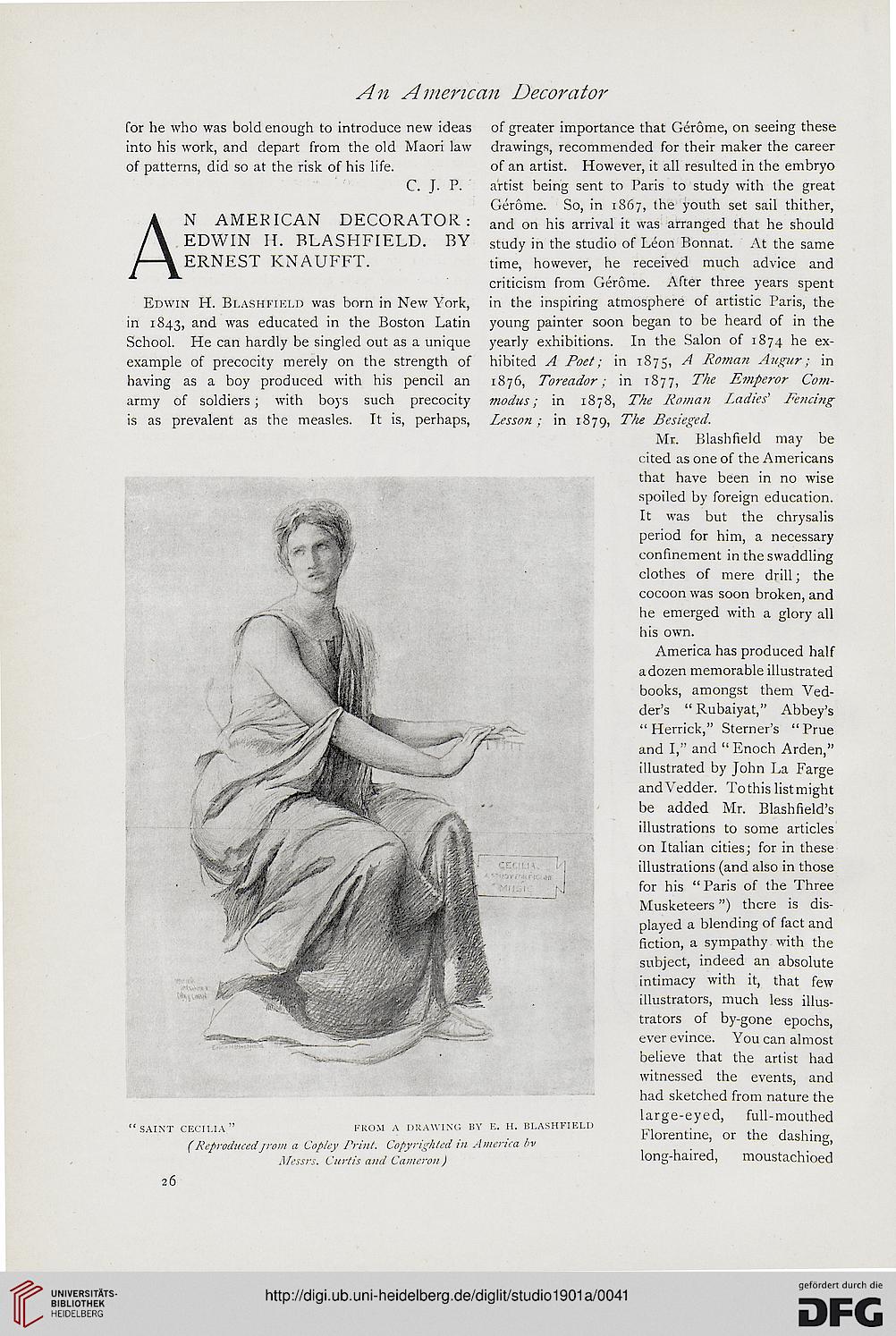 for he who was bold enough to introduce new ideas of greater importance that Gerome, on seeing these
into his work, and depart from the old Maori law drawings, recommended for their maker the career
of patterns, did so at the risk of his life. of an artist. However, it all resulted in the embryo

C. J. P. artist being sent to Paris to study with the great
Gerome. So, in 1867, the youth set sail thither,

AN AMERICAN DECORATOR : and on his arrival it was arranged that he should
EDWIN H. BLASHFIELD. BY study in the studio of Leon Bonnat. At the same
ERNEST KNAUFFT. time, however, he received much advice and

criticism from Gerome. After three years spent
Edwin H. BLASHFIELD was born in New York, in the inspiring atmosphere of artistic Paris, the
in 1843, and was educated in the Boston Latin young painter soon began to be heard of in the
School. He can hardly be singled out as a unique yearly exhibitions. In the Salon of 1874 he ex-
example of precocity merely on the strength of hibited A Poet; in 1875, ^ Roman Augur; in
having as a boy produced with his pencil an 1876, Toreador; in 1877, The Emperor Com-
army of soldiers; with boys such precocity modus; in 1878, The Roman Ladies' Fencing
is as prevalent as the measles. It is, perhaps, Lesson; in 1879, The Besieged.

Mr. Blashfield may be
cited as one of the Americans
that have been in no wise
spoiled by foreign education.
It was but the chrysalis
period for him, a necessary
confinement in the swaddling
clothes of mere drill; the
cocoon was soon broken, and
he emerged with a glory all
his own.

America has produced half
adozen memorable illustrated
books, amongst them Ved-
der's "Rubaiyat," Abbey's
" Herrick," Sterner's " Prue
and I," and " Enoch Arden,"
illustrated by John La Large
andYedder. To this list might
be added Mr. Blash field's
illustrations to some articles
on Italian cities; for in these
illustrations (and also in those
for his "Paris of the Three
Musketeers") there is dis-
played a blending of fact and
fiction, a sympathy with the
subject, indeed an absolute
intimacy with it, that few
illustrators, much less illus-
trators of by-gone epochs,
ever evince. You can almost
believe that the artist had
witnessed the events, and
had sketched from nature the
large-eyed, full-mouthed