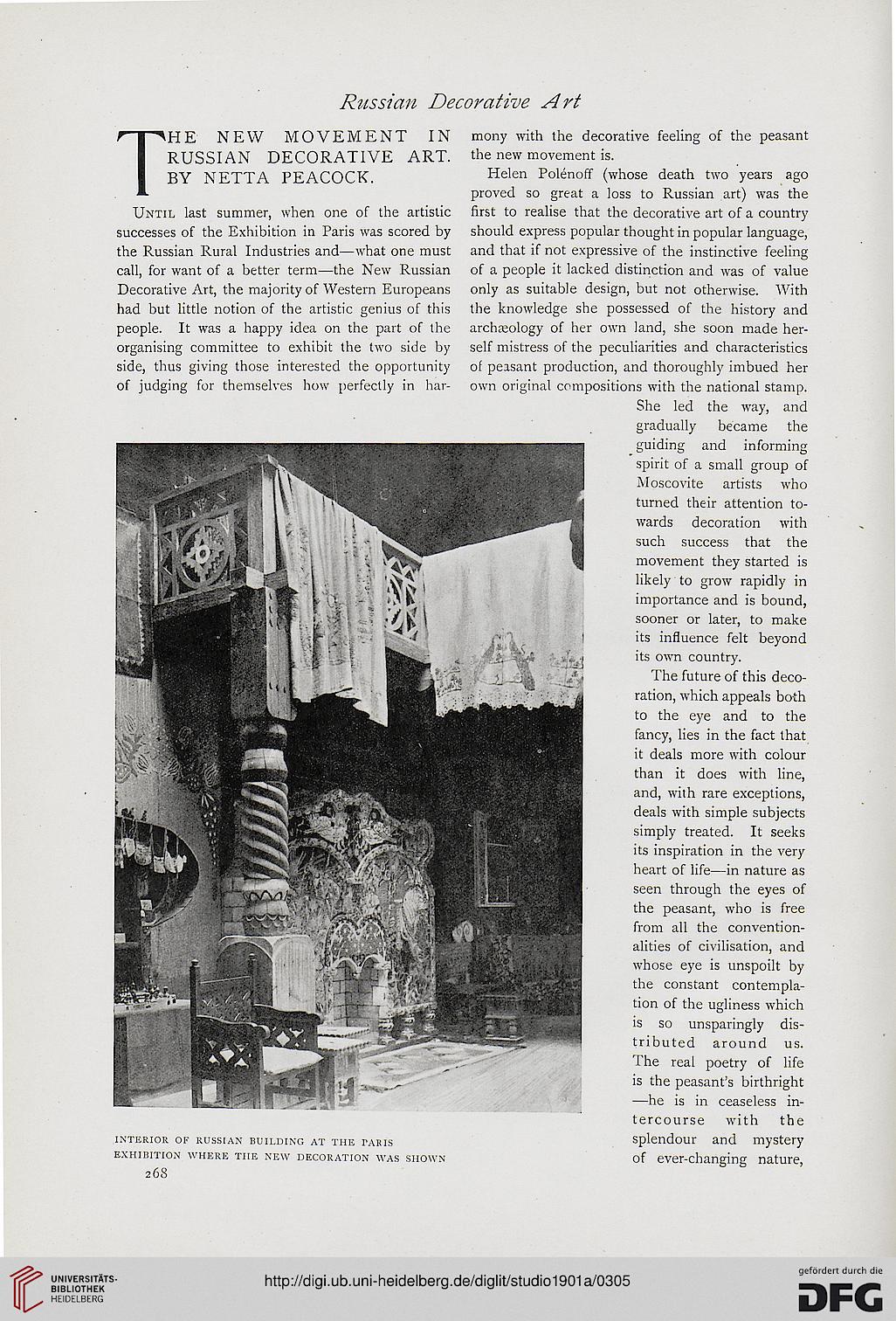 THE NEW MOVEMENT IN mony with the decorative feeling of the peasant
RUSSIAN DECORATIVE ART. the new movement is.
BY NETTA PEACOCK. Helen Polenoff (whose death two years ago

proved so great a loss to Russian art) was the
Until last summer, when one of the artistic first to realise that the decorative art of a country
successes of the Exhibition in Paris was scored by should express popular thought in popular language,
the Russian Rural Industries and—what one must and that if not expressive of the instinctive feeling
call, for want of a better term—the New Russian of a people it lacked distinction and was of value
Decorative Art, the majority of Western Europeans only as suitable design, but not otherwise. With
had but little notion of the artistic genius of this the knowledge she possessed of the history and
people. It was a happy idea on the part of the archaeology of her own land, she soon made her-
organising committee to exhibit the two side by self mistress of the peculiarities and characteristics
side, thus giving those interested the opportunity of peasant production, and thoroughly imbued her
of judging for themselves how perfectly in har- own original compositions with the national stamp.

She led the way, and
gradually became the
guiding and informing
spirit of a small group of
Moscovite artists who
turned their attention to-
wards decoration with
such success that the
movement they started is
likely to grow rapidly in
importance and is bound,
sooner or later, to make
its influence felt beyond
its own country.

The future of this deco-
ration, which appeals both
to the eye and to the
fancy, lies in the fact that
it deals more with colour
than it does with line,
and, with rare exceptions,
deals with simple subjects
simply treated. It seeks
its inspiration in the very
heart of life—in nature as
seen through the eyes of
the peasant, who is free
from all the convention-
alities of civilisation, and
whose eye is unspoilt by
the constant contempla-
tion of the ugliness which
is so unsparingly dis-
tributed around us.
The real poetry of life
is the peasant's birthright
—he is in ceaseless in-
tercourse with the

interior of Russian buii.ding at the pabis splendour and mystery

exhibition where the new decoration was shown of ever-changing nature,