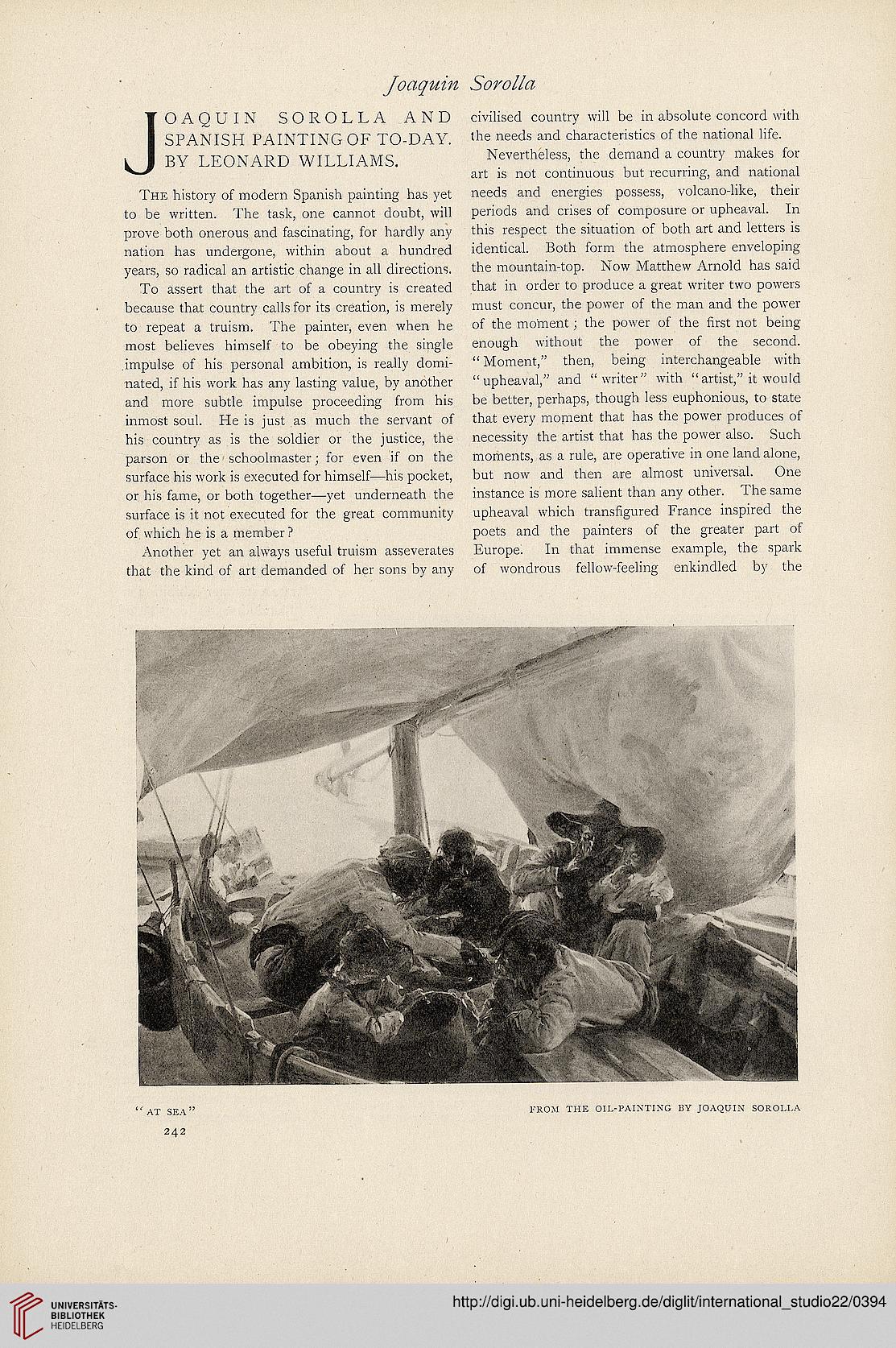 TOAQUIN SOROLLA AND
} SPANISH PAINTING OF TO-DAY.
BY LEONARD WILLIAMS.
THE history of modern Spanish painting has yet
to be written. The task, one cannot doubt, wiH
prove both onerous and fascinating, for hardiy any
nation has undergone, within about a hundred
years, so radical an artistic change in all directions.
To assert that the art of a country is created
because that country calls for its creation, is merely
to repeat a truism. The painter, even when he
most believes himself to be obeying the single
impulse of his personal ambition, is really domi-
nated, if his work has any lasting value, by another
and more subtle impulse proceeding from his
inmost soul. He is just as much the servant of
his country as is the soldier or the justice, the
parson or the schoolmaster; for even if on the
surface his work is executed for himself—his pocket,
or his fame, or both together—yet underneath the
surface is it not executed for the great community
of which he is a member ?
Another yet an always useful truism asseverates
that the kind of art demanded of her sons by any

civilised country will be in absolute concord with
the needs and characteristics of the national life.
Nevertheless, the demand a country makes for
art is not continuous but recurring, and national
needs and energies possess, volcano-like, their
periods and crises of composure or upheaval. In
this respect the situation of both art and letters is
identical. Both form the atmosphere enveloping
the mountain-top. Now Matthew Arnold has said
that in order to produce a great writer two powers
must concur, the power of the man and the power
of the moment; the power of the first not being
enough without the power of the second.
" Moment," then, being interchangeable with
"upheaval," and "writer" with "artist," it would
be better, perhaps, though less euphonious, to state
that every moment that has the power produces of
necessity the artist that has the power also. Such
moments, as a rule, are operative in one land alone,
but now and then are almost universal. One
instance is more salient than any other. The same
upheaval which transfigured France inspired the
poets and the painters of the greater part of
Europe. In that immense example, the spark
of wondrous fellow-feeling enkindled by the