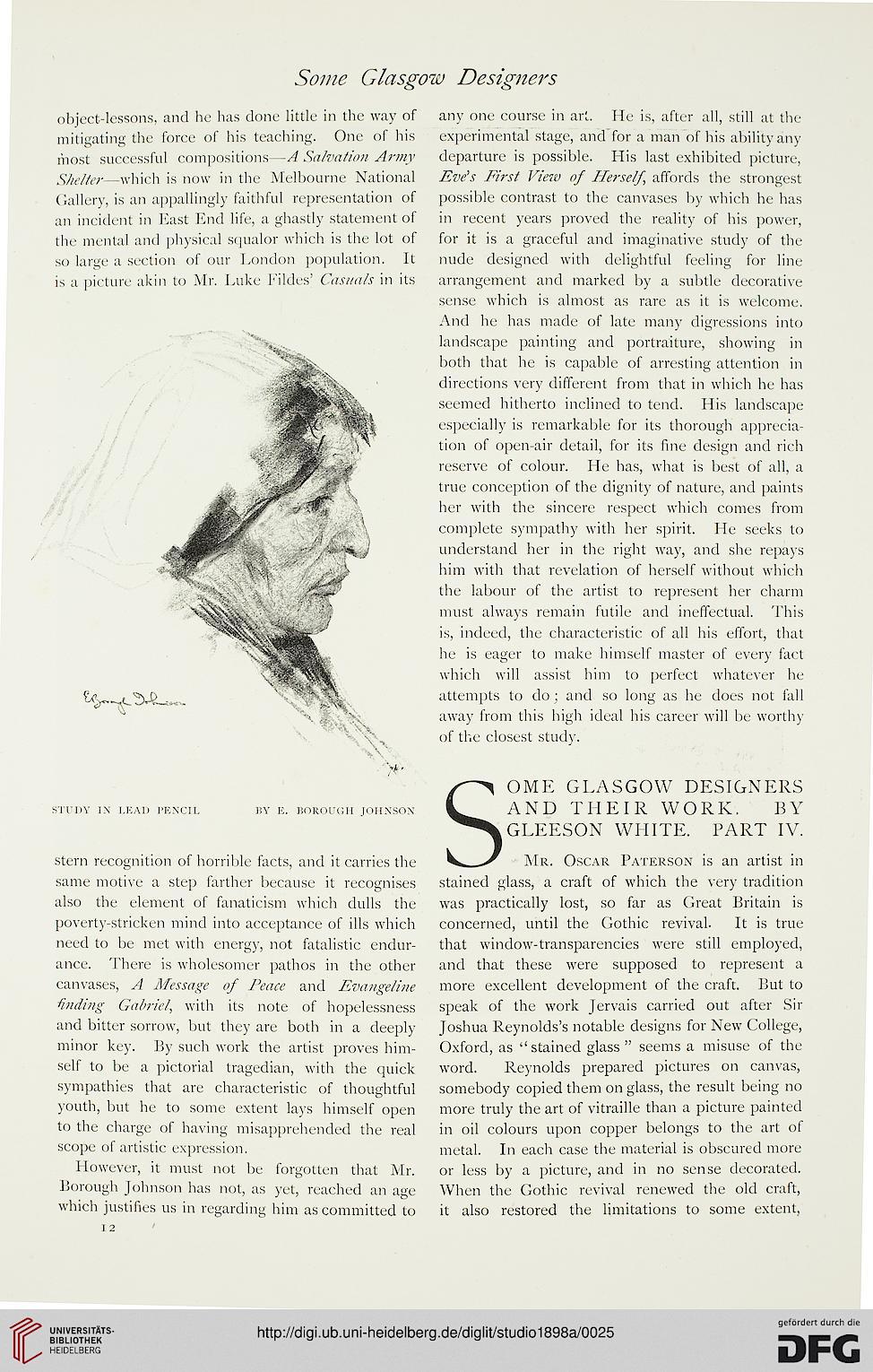 object-lessons, and he has done little in the way of
mitigating the force of his teaching. One of his
most successful compositions—A Salvation Army
Shelter—which is now in the Melbourne National
Gallery, is an appallingly faithful representation of
an incident in East End life, a ghastly statement of
the mental and physical squalor which is the lot of
so large a section of our London population. It
is a picture akin to Mr. Luke Fildes' Casuals in its

stern recognition of horrible facts, and it carries the
same motive a step farther because it recognises
also the element of fanaticism which dulls the
poverty-stricken mind into acceptance of ills which
need to be met with energy, not fatalistic endur-
ance. There is wholesomer pathos in the other
canvases, A Message of Peace and Evangeline
-finding Gabriel, with its note of hopelessness
and bitter sorrow, but they are both in a deeply
minor key. By such work the artist proves him-
self to be a pictorial tragedian, with the quick
sympathies that are characteristic of thoughtful
youth, but he to some extent lays himself open
to the charge of having misapprehended the real
scope of artistic expression.

However, it must not be forgotten that Mr.
Borough Johnson has not, as yet, reached an age
which justifies us in regarding him as committed to
] 2

any one course in art. He is, after all, still at the
experimental stage, and for a man of his ability any
departure is possible. His last exhibited picture,
Eve's First View of Herself affords the strongest
possible contrast to the canvases by which he has
in recent years proved the reality of his power,
for it is a graceful and imaginative study of the
nude designed with delightful feeling for line
arrangement and marked by a subtle decorative
sense which is almost as rare as it is welcome.
And he has made of late many digressions into
landscape painting and portraiture, showing in
both that he is capable of arresting attention in
directions very different from that in which he has
seemed hitherto inclined to tend. His landscape
especially is remarkable for its thorough apprecia-
tion of open-air detail, for its fine design and rich
reserve of colour. He has, what is best of all, a
true conception of the dignity of nature, and paints
her with the sincere respect which comes from
complete sympathy with her spirit. He seeks to
understand her in the right way, and she repays
him with that revelation of herself without which
the labour of the artist to represent her charm
must always remain futile and ineffectual. This
is, indeed, the characteristic of all his effort, that
he is eager to make himself master of every fact
which will assist him to perfect whatever he
attempts to do; and so long as he does not fall
away from this high ideal his career will be worthy
of the closest study.

SOME GLASGOW DESIGNERS
AND THEIR WORK. BY
GLEESON WHITE. PART IV.
Mr. Oscar Paterson is an artist in
stained glass, a craft of which the very tradition
was practically lost, so far as Great Britain is
concerned, until the Gothic revival. It is true
that window-transparencies were still employed,
and that these were supposed to represent a
more excellent development of the craft. But to
speak of the work Jervais carried out after Sir
Joshua Reynolds's notable designs for New College,
Oxford, as "stained glass " seems a misuse of the
word. Reynolds prepared pictures on canvas,
somebody copied them on glass, the result being no
more truly the art of vitraille than a picture painted
in oil colours upon copper belongs to the art of
metal. In each case the material is obscured more
or less by a picture, and in no sense decorated.
When the Gothic revival renewed the old craft,
it also restored the limitations to some extent.