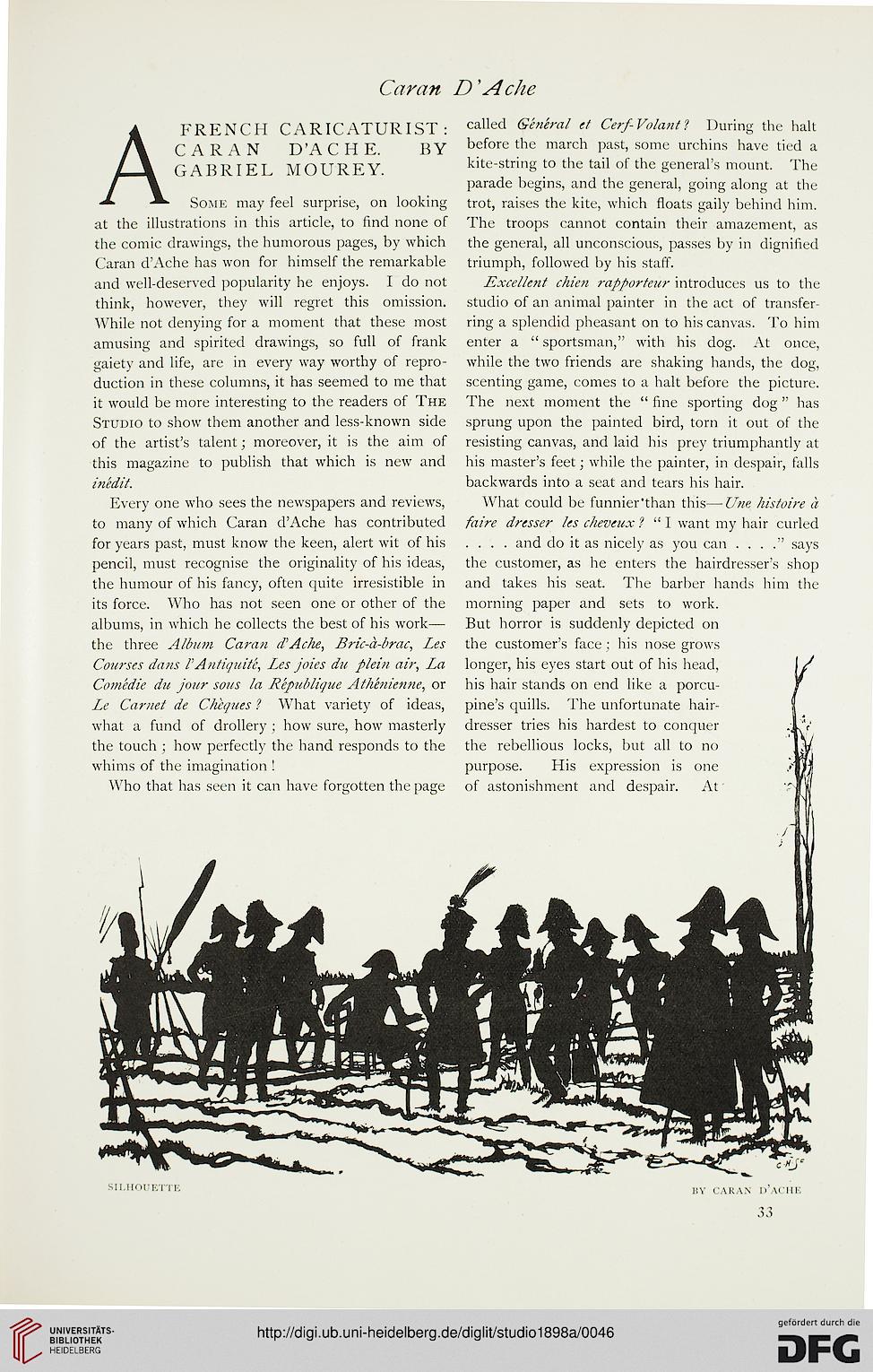 Information about OCR text
Car an D 'A chc

CARAN D'ACHE. BY before the march past, some urchins have tied a

GABRIEL MOUREY kite-string to the tail of the general's mount. The

parade begins, and the general, going along at the

Some may feel surprise, on looking trot, raises the kite, which floats gaily behind him.

at the illustrations in this article, to find none of The troops cannot contain their amazement, as

the comic drawings, the humorous pages, by which the general, all unconscious, passes by in dignified

Caran d'Ache has won for himself the remarkable triumph, followed by his staff.

and well-deserved popularity he enjoys. I do not Excellent chien ?-apporteur introduces us to the
think, however, they will regret this omission. studio of an animal painter in the act of transfer-
While not denying for a moment that these most ring a splendid pheasant on to his canvas. To him
amusing and spirited drawings, so full of frank enter a " sportsman," with his dog. At once,
gaiety and life, are in every way worthy of repro- while the two friends are shaking hands, the dog,
duction in these columns, it has seemed to me that scenting game, comes to a halt before the picture,
it would be more interesting to the readers of The The next moment the " fine sporting dog " has
Studio to show them another and less-known side sprung upon the painted bird, torn it out of the
of the artist's talent; moreover, it is the aim of resisting canvas, and laid his prey triumphantly at
this magazine to publish that which is new and his master's feet; while the painter, in despair, falls
inedit. backwards into a seat and tears his hair.

Every one who sees the newspapers and reviews, What could be funnier'than this—Une histoire a

to many of which Caran d'Ache has contributed faire dresser les chevcux ? " I want my hair curled

pencil, must recognise the originality of his ideas, the customer, as he enters the hairdresser's shop

the humour of his fancy, often quite irresistible in and takes his seat. The barber hands him the

its force. Who has not seen one or other of the morning paper and sets to work,

albums, in which he collects the best of his work— But horror is suddenly depicted on

Comedie du jour sous la Republique Athenienne, or his hair stands on end like a porcu-

what a fund of drollery ; how sure, how masterly dresser tries his hardest to conquer

the touch ; howT perfectly the hand responds to the the rebellious locks, but all to no

whims of the imagination! purpose. His expression is one

Who that has seen it can have forgotten the page of astonishment and despair. At