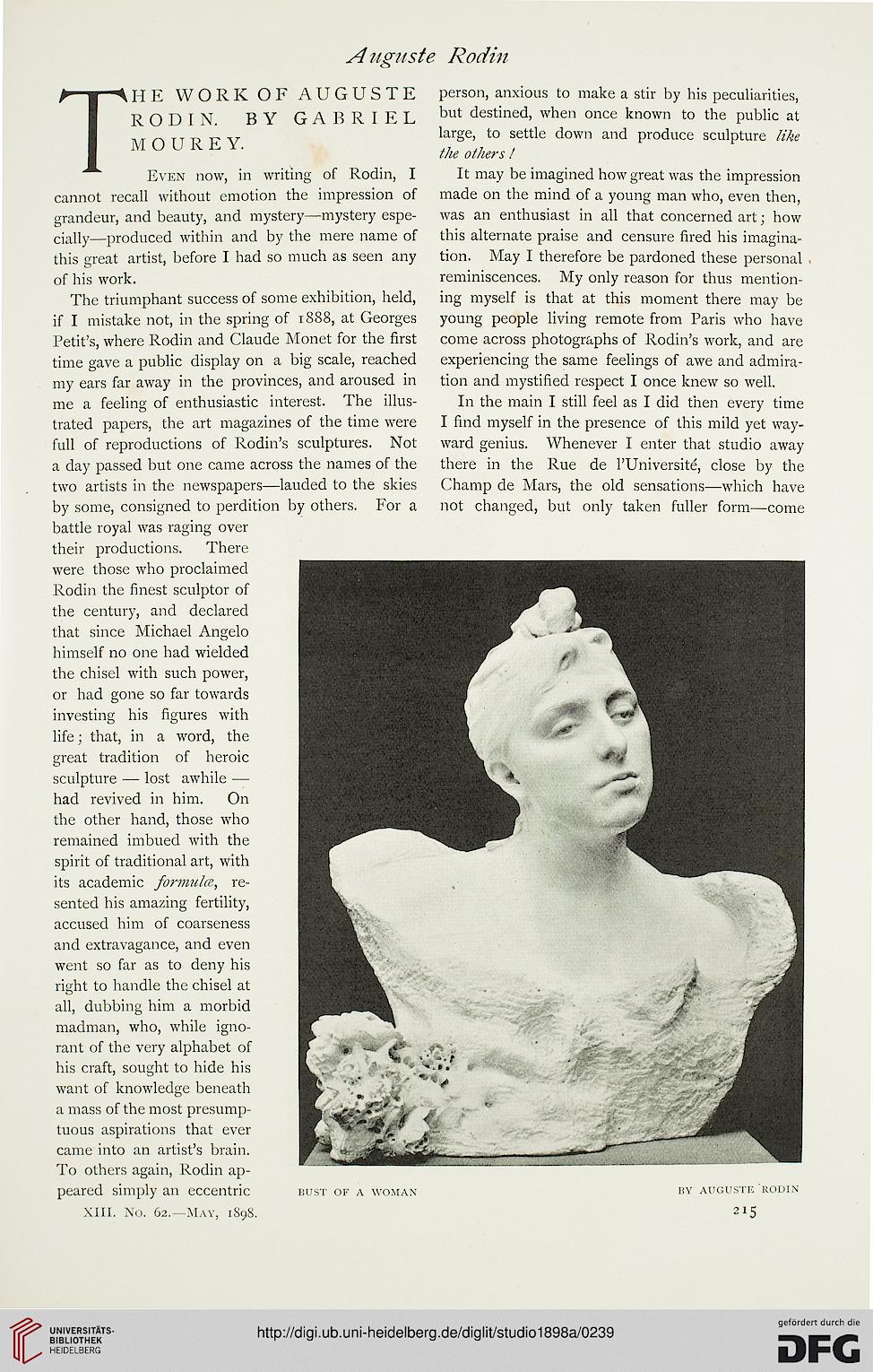 HE WORK OF AUGUSTE person, anxious to make a stir by his peculiarities,
RODIN. BY GABRIEL but destmed> when once known to the public at

Even now, in writing of Rodin, I It may be imagined how great was the impression
cannot recall without emotion the impression of made on the mind of a young man who, even then,
grandeur, and beauty, and mystery—mystery espe- was an enthusiast in all that concerned art; how
cially—produced within and by the mere name of this alternate praise and censure fired his imagina-
this great artist, before I had so much as seen any tion. May I therefore be pardoned these personal
of his work. reminiscences. My only reason for thus mention-

The triumphant success of some exhibition, held, ing myself is that at this moment there may be
if I mistake not, in the spring of 1888, at Georges young people living remote from Paris who have
Petit's, where Rodin and Claude Monet for the first come across photographs of Rodin's work, and are
time gave a public display on a big scale, reached experiencing the same feelings of awe and admira-
my ears far away in the provinces, and aroused in tion and mystified respect I once knew so well,
me a feeling of enthusiastic interest. The illus- In the main I still feel as I did then every time
trated papers, the art magazines of the time were I find myself in the presence of this mild yet way-
full of reproductions of Rodin's sculptures. Not ward genius. Whenever I enter that studio away
a day passed but one came across the names of the there in the Rue de FUniversite, close by the
two artists in the newspapers—lauded to the skies Champ de Mars, the old sensations—which have
by some, consigned to perdition by others. For a not changed, but only taken fuller form—come
battle royal was raging over
their productions. There
were those who proclaimed
Rodin the finest sculptor of
the century, and declared
that since Michael Angelo
himself no one had wielded
the chisel with such power,
or had gone so far towards
investing his figures with
life; that, in a word, the
great tradition of heroic
sculpture — lost awhile —
had revived in him. On
the other hand, those who
remained imbued with the
spirit of traditional art, with
its academic formula, re-
sented his amazing fertility,
accused him of coarseness
and extravagance, and even
went so far as to deny his
right to handle the chisel at
all, dubbing him a morbid
madman, who, while igno-
rant of the very alphabet of
his craft, sought to hide his
want of knowledge beneath
a mass of the most presump-
tuous aspirations that ever
came into an artist's brain.
To others again, Rodin ap-
peared simply an eccentric kust of a woman by auguste rodin
XIII. No. 62. May, 1898. 215