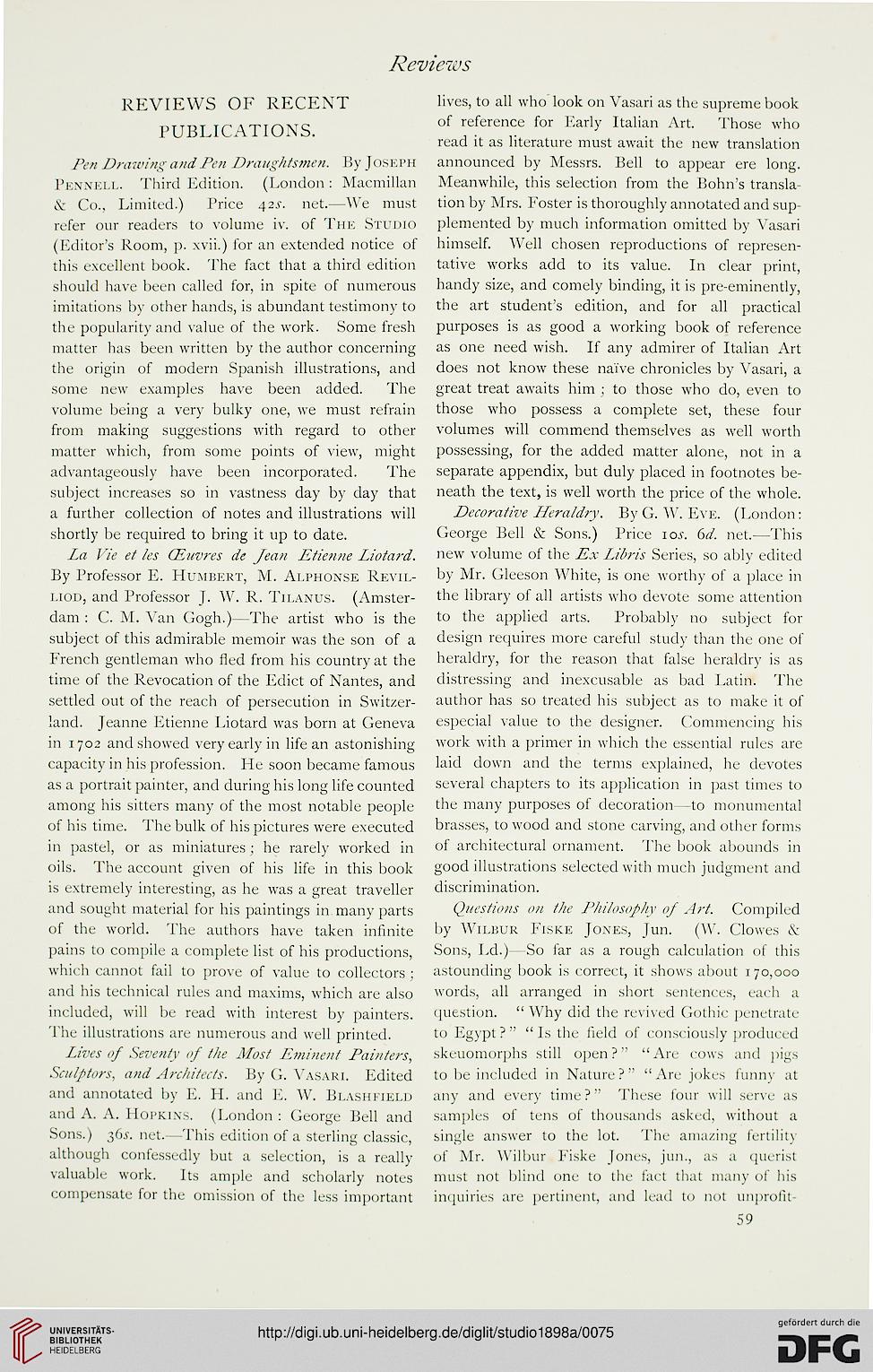 Pen Drawing and Pen Draughtsmen. By Joseph
Pennell. Third Edition. (London: Macmillan
,\: Co., Limited.) Price 42*. net.—We must
refer our readers to volume iv. of The Studio
(Editor's Room, p. xvii.) for an extended notice of
this excellent book. The fact that a third edition
should have been called for, in spite of numerous
imitations by other hands, is abundant testimony to
the popularity and value of the work. Some fresh
matter has been written by the author concerning
the origin of modern Spanish illustrations, and
some new examples have been added. The
volume being a very bulky one, we must refrain
from making suggestions with regard to other
matter which, from some points of view, might
advantageously have been incorporated. The
subject increases so in vastness day by day that
a further collection of notes and illustrations will
shortly be required to bring it up to date.

La Vie et les CEiwres de Jean Etie?ine Liotard.
By Professor E. Humbert, M. Alphonse Revil-
liod, and Professor J. W. R. Tilanus. (Amster-
dam : C. M. Van Gogh.)—The artist who is the
subject of this admirable memoir was the son of a
French gentleman who fled from his country at the
time of the Revocation of the Edict of Nantes, and
settled out of the reach of persecution in Switzer-
land. Jeanne Etienne Liotard was born at Geneva
in 1702 and showed very early in life an astonishing
capacity in his profession. He soon became famous
as a portrait painter, and during his long life counted
among his sitters many of the most notable people
of his time. The bulk of his pictures were executed
in pastel, or as miniatures; he rarely worked in
oils. The account given of his life in this book
is extremely interesting, as he was a great traveller
and sought material for his paintings in many parts
of the world. The authors have taken infinite
pains to compile a complete list of his productions,
which cannot fail to prove of value to collectors :
and his technical rules and maxims, which are also
included, will be read with interest by painters.
The illustrations are numerous and well printed.

Lives of Seventy of the Most Eminent Painters,
Sculptors, and Architects. By G. Vasari. Edited
and annotated by E. H. and E. W. Blashfield
and A. A. HOPKINS. (London : George Bell and
Sons.) 36X. net.—This edition of a sterling classic,
although confessedly but a selection, is a really
valuable work. Its ample and scholarly notes
compensate for the omission of the less important

lives, to all who look on Vasari as the supreme book
of reference for Early Italian Art. Those who
read it as literature must await the new translation
announced by Messrs. Bell to appear ere long.
Meanwhile, this selection from the Bonn's transla-
tion by Mrs. Foster is thoroughly annotated and sup-
plemented by much information omitted by Vasari
himself. Well chosen reproductions of represen-
tative works add to its value. In clear print,
handy size, and comely binding, it is pre-eminently,
the art student's edition, and for all practical
purposes is as good a working book of reference
as one need wish. If any admirer of Italian Art
does not know these naive chronicles by Vasari, a
great treat awaits him ; to those who do, even to
those who possess a complete set, these four
volumes will commend themselves as well worth
possessing, for the added matter alone, not in a
separate appendix, but duly placed in footnotes be-
neath the text, is well worth the price of the whole.

Decorative Heraldry. By G. AW Eve. (London:
George Bell & Sons.) Price \os. 6d. net.—This
new volume of the Ex Libris Series, so ably edited
by Mr. Gleeson White, is one worthy of a place in
the library of all artists who devote some attention
to the applied arts. Probably no subject for
design requires more careful study than the one of
heraldry, for the reason that false heraldry is as
distressing and inexcusable as bad Latin. The
author has so treated his subject as to make it of
especial value to the designer. Commencing his
work with a primer in which the essential rules are
laid down and the terms explained, he devotes
several chapters to its application in past times to
the many purposes of decoration —to monumental
brasses, to wood and stone carving, and other forms
of architectural ornament. The book abounds in
good illustrations selected with much judgment and
discrimination.

Questions on the Philosophy of Art. Compiled
by Wilbur Liske Jones, Jun. (W. Clowes c\:
Sons, Ld.)—So far as a rough calculation of this
astounding book is correct, it shows about 170,000
words, all arranged in short sentences, each a
question. "Why did the revived Gothic penetrate
to Egypt?" "Is the field of consciously produced
skeuomorphs still open?" "Arc cows and pigs
to be included in Nature?" "Are jokes funny at
any and every time?" These four will serve as
samples of tens of thousands asked, without a
sinule answer to the lot. The amazing fertility
of Mr. Wilbur Fiske Jones, jun., as a querist
must not blind one to the fact that many of his
inquiries are pertinent, and lead to not unprofit-